Bettman used his speech to the Calgary Chamber of Commerce to make vague and somewhat bizarre threats to the people of Calgary not yet on board the Flames' owners expensive proposal.

Share All sharing options for: Gary Bettman begs for cash on behalf of Flames' rich owners

Be warned: if you don't open up your wallet to give money to the CalgaryNEXT project, the city of Calgary itself will fall to ruins. It would simply wink into the the void. Seriously! Gary Bettman really - desperately - wants you to believe this.

It is not an overstatement to say the future stability, viability and continuity of the Calgary Flames, and perhaps the city of Calgary, rests on the achievement of CalgaryNEXT.

That vague threat to the city of Calgary was made by Bettman yesterday at a sold out luncheon hosted by the Calgary Chamber of Commerce. Bettman will reportedly meet today with Calgary Sports and Entertainment Corporation (CSEC) President Ken King and city officials to further 'discuss' the proposal.

What is CalgaryNEXT, again? 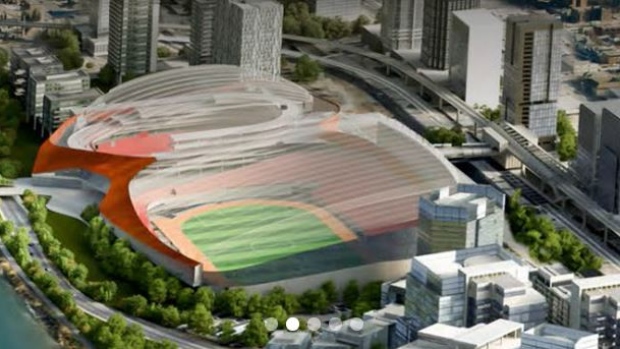 Let's first take a step back and get a handle on what it is we are talking about. CalgaryNEXT is a development proposal drafted by Calgary Sports and Entertainment Corporation (CSEC): the for-profit business which owns the Calgary Flames, Hitmen, Roughnecks, Stampeders, and several related minor league franchises. CSEC operates the Saddledome, though it is a civic asset owned by Calgary.

The proposal is to build a new 20,000 seat arena for The Flames, and a 30,000 seat 'fieldhouse' stadium which will ultimately be used for several different sports, including Stampeders football. This would all be west of downtown Calgary, next to The Bow. Adjacent lands are also proposed to be redeveloped into trendy 'walkable' communities.

The proposal itself, as I suppose things do these days, has its own website. It resembles a condominium sales pitch website: full of flashy renderings and promises, repeating all the trendy development buzzwords, while offering little substance one would need to make an informed decision:

After years of research, financial modeling, and considering a number of potential locations, CSEC has identified an opportunity to build a world-class home for sports and entertainment. CalgaryNEXT will anchor the revitalization and development of the West Village. It will bring multiple facilities into one and be built on reclaimed land that will enable future residential and commercial development. CalgaryNEXT will enable the completion and revitalization of Calgary’s urban core.

CalgaryNEXT will be the globally recognized centerpiece of a revitalized West Village. It will enable the completion of our urban core and transform how Calgarians live, work and play.

"Revitalization," "world-class," "reclaimed land," "globally recognized". Sounds promising, doesn't it? Like everything of this nature, there is fine print you are not supposed to read. Literally. You won't find the financial particulars of this proposal in more than the broadest, and useless, of strokes.

Why? Because they don't really exist yet.

How much will it really cost?

Who knows? As far as I can determine this proposal is so far little more than a drawing on a napkin. If there has been "years of financial modelling" you would think it would have been shared with the Mayor's office, but he says it isn't there.

The whole point is there's no proposal. It's just an idea. - Mayor Naheed Nenshi

When pressed on Mayor Nenshi's comments Bettman still refused to talk about the particulars, saying simply: "I can't speak for the mayor. I don't know what information he is privy to." Bettman flat out refused to speak to the financial details of the plan, likely because there isn't anything real.

An objective analysis is needed, but you can't have it without the details. Bettman attempting to extort the city so early in the process makes me think the proposal is already on shaky financial ground, and the private partners require the funding commitment from the city because private lenders refuse to touch it. But if private lenders won't, should the City of Calgary?

Perhaps in other cities he has come to, the city councils have just written cheques based on back-of-the-napkin proposals without any consultation to the public or without any analysis. That’s not how we operate here. We have a comprehensive framework in place. As far as I know the Flames are very happy with the comprehensive framework, if they’re not they certainly haven’t told me that.

I believe it really is possible for taxpayer funds to add value to the city by building privately owned developments such as the CalgaryNEXT site. The principle is simple: pay now to generate a future tax revenue income stream that lasts for decades and pays you back more than you put it. That's a good thing. It's the basis of pretty much all real estate development there is.

But the question is priorities. Bettman himself actually put it very succinctly:

Is the investment of Calgarian's money in new pro-sports facilities they won't ultimately own really the best way to improve their quality of life 30 years from now, or is there other public infrastructure that will pay off to them more? The Flames ownership group is proposing to borrow a huge sum of money, but have YOU take on the risk of it not working out. Is that the way you want it to go?

These are the questions the residents of Calgary need time to think about. Gary Bettman needs to keep his mouth shut while they do it.