The Flames are now halfway through the 2014-15 season. After a rather surprising start, they've cooled off a bit, but they're still very much in the playoff race: something nobody was really expecting.

Share All sharing options for: A look at the Calgary Flames halfway through the 2014-15 season

As of this exact moment, the Calgary Flames are one and a half years into their rebuild. This time a year ago, they had a 14-21-6 record, good for a whole 34 points. That put them very much in the basement of the Pacific Division (although still above the Edmonton Oilers, of course). Now, a lot has changed over the past year: the acquiring of a decent goaltender in Jonas Hiller, the emergence of a rookie known as Johnny Hockey, the rapid development of Sean Monahan.

As a result of this, and more, halfway through the 2014-15 season - year two of the rebuild - the Flames have a 21-17-3 record, good for 45 points. This puts them in the midst of a tight, four-team pack in the Pacific Division, well ahead of the straggling Oilers and Arizona Coyotes, and just outside of the playoff picture, but mathematically, still very much a threat to make the dance.

You can thank the improved goaltending, the formidable defence pairing of Mark Giordano and TJ Brodie, and the fast rise in a couple of prospects for the massive leap in quality that is Flames hockey. But don't think the rebuild is over just yet. With a 44.5% corsi rating, the Flames are still the second worst possession team in the league, above only the truly abhorrent Buffalo Sabres, who sit at 35.9%. But that's okay. This is a rebuilding team, and if the rebuild is done right, that stat will improve. Just don't forget that the Flames' record is rather deceptive in regards to their actual on-ice performance.

Here are some other basic stats as to where the Flames are at, halfway through the season:

We've seen a lot happen over the 21 games since our last look at the Flames. Two rookies, Johnny Gaudreau and Josh Jooris, made the team full time. Minor league call ups such as Max Reinhart, Corban Knight, Sven Baertschi, and Michael Ferland eventually went back to the AHL, while Markus Granlund, the longest-standing, is still around thanks to injuries.

We saw an eight-game losing streak drag the Flames from challenging for the Pacific Division title to just outside the playoff picture. We saw the Flames' team shooting percentage plummet from 10.6%, first in the league, to 8.5%, now eighth, as one of the causes. Goaltending, meanwhile, has remained pretty consistent: over the first 20 games of the season, Jonas Hiller and Karri Ramo combined for a 92.6% save percentage; after 41 games, that save percentage is now at 92.3%.

We saw Jiri Hudler, a forward, finally take the team scoring lead from Mark Giordano, a defenceman. We saw Johnny Gaudreau explode for five goals within a week, and put himself third in team scoring. Sean Monahan became the team's most-played forward, and leads everyone with 103 shots on net. While his shooting percentage dropped from its unsustainable 15.7% in his rookie season to the more realistic 10.7% of this season, his 11 goals is good for third on the team, and 25 points sixth.

So the Flames aren't perfect - far from it - but there's a lot to like about them. They're the only team with three defencemen - Mark Giordano, TJ Brodie, and Dennis Wideman - in the top 20 for defencemen scoring (and Brodie for sure, at least, will be a player for the Flames a while yet). More importantly - because rebuilding, and all that - they're the only NHL team with three rookies - Johnny Gaudreau, Josh Jooris, and Markus Granlund - in the top 15 for rookie scoring.

These numbers are all well and good, but how about some context? Through the first 20 games of the season, we looked at how the players were being used. Here's a visual reminder (all of these courtesy of the exquisite War on Ice): 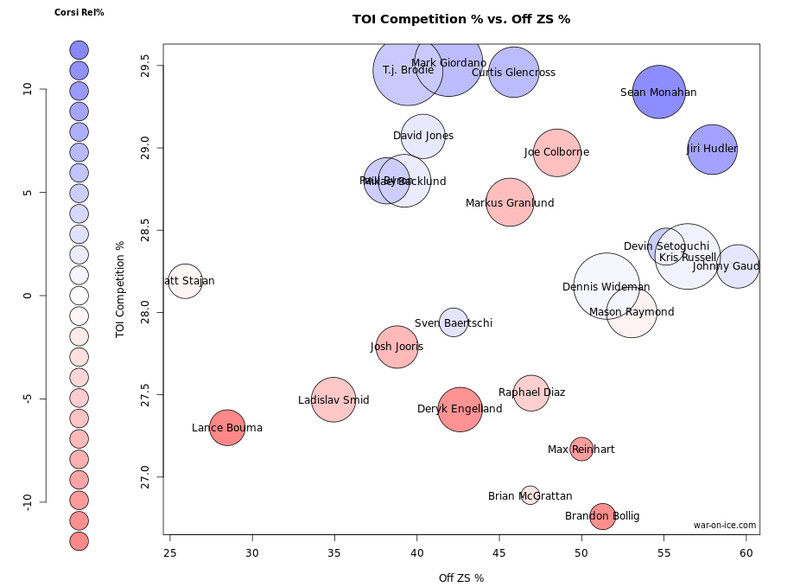 That's the Flames' player usage and performance from games 1-20. Games 21-41 look like this:

There are a few noticeable differences right off the bat, skewed by those who required heavy sheltering and played limited minutes. (I'm looking right at you, Brian McGrattan. And Devin Setoguchi. Corban Knight, too.) Since McGrattan and Setoguchi only played one game over this time period, and Knight two, I'm just going to cut them out, and that leaves us with this much more readable chart:

Here's how things have changed over the last quarter of the season:

Here's a look at the Flames' player usage throughout the entire first half of the season (minimum 30 minutes a player, because otherwise Corban Knight and his extremely high offensive zone starts makes the chart incredibly squished):

A lot of this has already been covered: Monahan, Giordano, and Brodie are among the team's best; Gaudreau and Hudler get good zone starts and that's part of the reason they're leaders in team scoring; the bottom three defencemen aren't particularly great, and neither is Brandon Bollig (or Lance Bouma, for that matter); Matt Stajan doesn't get enough credit, and neither does Paul Byron, while Joe Colborne may be getting too much. But there's one other name I want to draw your attention to on there:

Over the 11 games he played in the first quarter of the season - while injured - and the one game he played in the second quarter, he's by far one of the most valuable Flames. Only Matt Stajan starts in the defensive zone more than he does, and Backlund not only faces a higher quality of player, but he does a better job of it, and with more ice time, too.

So the Flames are a poor possession team now, and they'll probably be that way the rest of the season. But look at Mikael Backlund's place on that chart. The Flames don't have anyone else who can handle those minutes as well as he can (although Monahan is starting to trend that way). Even if Backlund doesn't score a ton - and he very well still might - he's one of the most valuable Flames, and this is a contract year for him. Re-signing him is an absolute priority. We've already seen how bad the Flames are without him, but things are almost certain to improve now that he's back.

Thus far, though, this particular collection of players has brought us a rebuilding team with a decent record, but underlying numbers that do not exactly reflect it. To close out, here's the Flames' game-by-game corsi for stats throughout the entire first half of the 2014-15 season:

The Flames' average CF% this season (green line), in all situations, has been about 47%, which isn't good, but isn't terrible, either, especially considering where the team currently is. Still, this means that on average, the team possesses the puck less than their opponents, and has throughout the season. This will be an area the Flames need to work on, but that should come with time, assuming good drafting and prospect development follow through.

The team has still managed its fair share of out-possessing opponents, and look to have done that more recently than at the start of the season (veteran players returning to the lineup corresponds with this). The valleys have been less, as well, but still present.

Ultimately, the Flames look to be a team trending upwards in possession, even if the process is likely to be slow. But hey, that's what a rebuild is. The Flames', one and a half seasons in, looks like it's going pretty okay.