Two veteran defencemen, Raphael Diaz and Sheldon Brookbank, have been invited to Flames training camp. With limited options on defence, there's a chance one, or both, could make the team.

Share All sharing options for: Raphael Diaz and Sheldon Brookbank: The defencemen invited to training camp

The Flames may have signed Corey Potter to a one-year, two-way contract, but they aren't done adding to their defence just yet:

#Flames have confirmed that D Sheldon Brookbank will attend training camp on a tryout basis.

@SchweizerSilvan reports out of Switzerland that D-Man Raphael Diaz will have a tryout with #Flames at Training Camp. CP had it.

As of right now, the Flames have only seven NHL defencemen under contract: Mark Giordano, TJ Brodie, Kris Russell, Dennis Wideman, Ladislav Smid, Deryk Engelland, and Corey Potter. Both Brookbank and Diaz have an advantage that works towards them: four of Calgary's seven defencemen shoot left, and of the three who shoot right (Wideman, Engelland, and Potter), only Wideman averages more than 20 minutes a game. So, there may still yet be spots for both players, although it's worth noting Brookbank averaged even less ice time than Engelland and Potter last season, while Diaz averaged more than all three of them.

That's just one difference between the two prospective Flames defencemen. Here are some more:

Physicality and size are important to the Flames (see: Deryk Engelland's contract), and Brookbank wins in this department. Diaz, however, isn't far behind: he's only two inches shorter and five pounds lighter, according to their listed stats.

The Flames have just one defenceman, Russell, under 6', so Diaz's height shouldn't hold him back. Russell and Brodie are the only defencemen listed as under 200 lbs, but Diaz is heavier than both of them. Meanwhile, Engelland, Potter, and Smid are all listed as bigger than Brookbank. None of these players play particularly big minutes, but neither does Brookbank.

Verdict: Brookbank with the slight edge.

Brookbank is 33 years old, and with an early October birthday, he'll be 34 by the time the season starts. Diaz is 28.

The choice here is simple: Diaz is entering his prime, while Brookbank is exiting his. Furthermore, the Flames are a rebuilding team who should be looking for younger talent. Brodie (24), Russell (27), and Smid (28) are the only Flames defencemen under the age of 30. Brookbank would automatically become the oldest member of the entire Flames team. Simply put, Diaz is likely to have greater impact for a longer time with the Flames.

Last season, Brookbank scored two goals and five assists for seven points over 48 games with the Chicago Blackhawks. That's .15 points per game. He had 43 shots on net for a 4.7% shooting percentage, and a PDO of 100.50.

Diaz scored two goals and 13 assists for 15 points over 63 games with the Montreal Canadiens, Vancouver Canucks, and New York Rangers. That's .24 points per game. He had 68 shots on net for a 2.9% shooting percentage, and a PDO of 98.55.

Defencemen aren't always expected to score, but it's nice when they do, and in this case, Diaz clearly brings more offence. Furthermore, his lower shooting percentage and PDO (in theory, a player's PDO should be 100) indicates that he may have more offence to give next season, while Brookbank isn't likely to perform much better.

The Flames like grit, so here are the players' gritchart stats from the 2013-14 season:

This depends on what kind of physicality you're a fan of. Brookbank appeared much more aggressive than Diaz last season, while Diaz, well, blocked a lot of shots.

Verdict: The Flames are probably going for increased physicality, so this one goes to Brookbank.

For this one, we'll go to a simple chart via War on Ice: 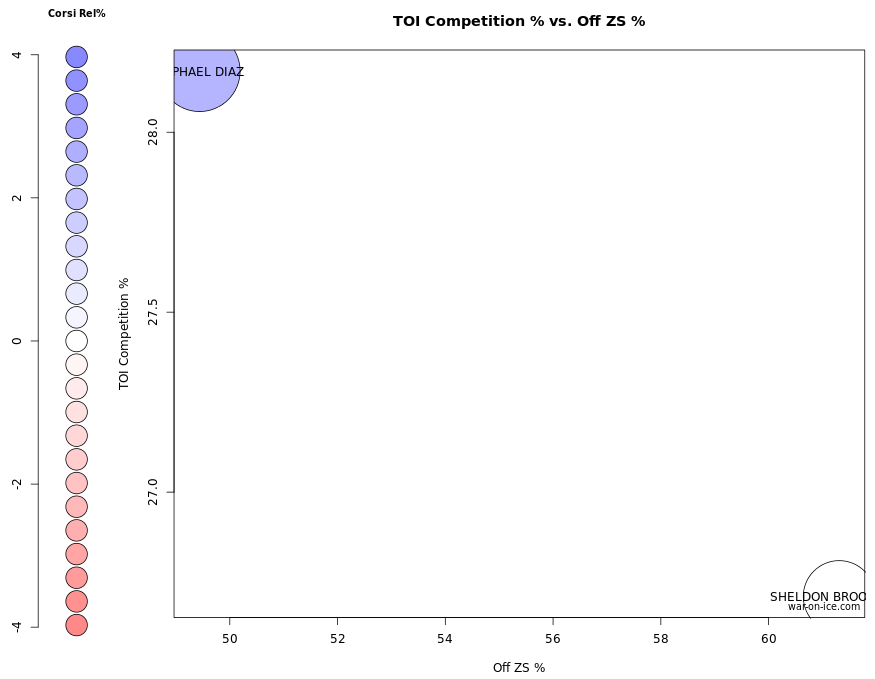 What this means is last season, when Diaz was on the ice, he did well in directing shots towards the opponent's net rather than his own relative to his team, while Brookbank did not. It also shows Diaz played in much tougher competition, as he faced a higher quality of player (as judged by his opponents' time on ice: it stands to reason better players will be on the ice longer), and started far less often in the offensive zone. Brookbank played much more sheltered minutes, and didn't perform as well.

So basically, in a chart like this, having a blue circle closer to the top left corner is good, while having a red circle in the bottom right indicates you may not be a great player.

For context, here's where they compare to the Flames' regular six defencemen from last season: 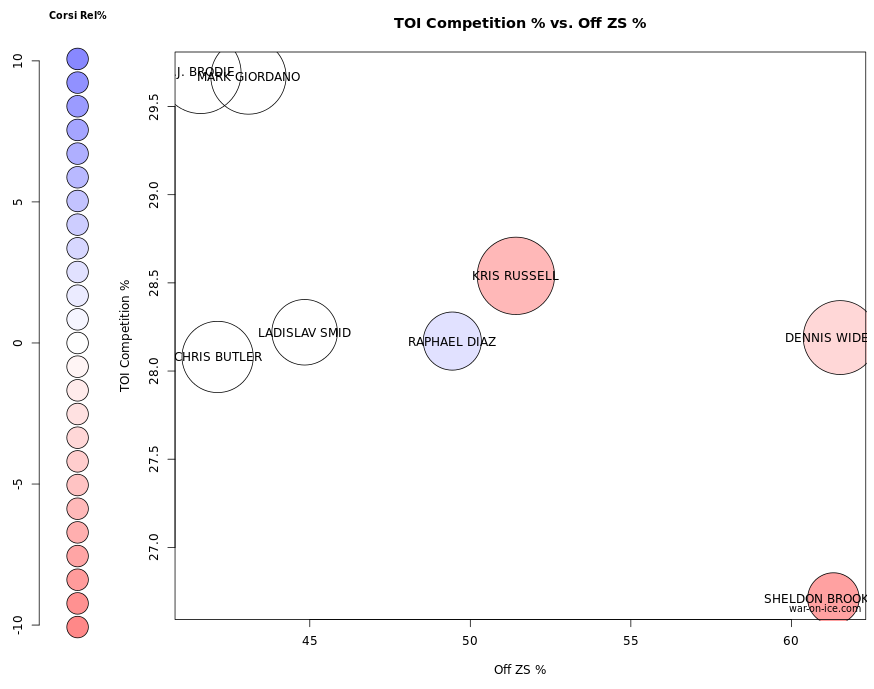 The Flames should sign Raphael Diaz. They could have just signed him to a contract right away and not even bothered with the training camp invite. If Diaz has a healthy preseason and somehow doesn't end up on the Flames' opening night roster, then something has gone horribly wrong.

As for Brookbank, he doesn't add much and might, in fact, be worse than Engelland. The only advantage Brookbank has on Diaz is his physicality, but the Flames signed Engelland to a massive (for him) contract, so he should be the one getting those requisite gritty minutes.

Ideally, the Flames' defensive lineup to start the season will look something like this:

It isn't the greatest defence ever, but it's far from the worst. Both players would add to the Flames' defensive depth, but Diaz in particular would be a good signing.