The Flames would send down Austin Carroll earlier today and then tonight they would lose Markus Granlund to an apparent injury.

After falling 3-1 last night in Calgary, the Flames were looking to bounce back this evening in Vancouver. Sam Bennett's strong play earned him another game tonight. Tonight, the Flames would dress a questionably "weaker" roster than last night.

The Flames opened the game once again electing for Sam Bennett to take the opening face-off. He lost again. To Brad Richardson. Again. Oh well, he’s a kid and it’ll take time! Calgary within minutes of the period starting had a great opportunity as Paul Byron fed a perfect pass to Bennett. Fortunately for Vancouver, former Olympian Ryan Miller was able to stop it.

The Canucks dressing a formidably "better" or "more experienced" roster definitely made a focus of setting the tone by getting back to where they were pretors era. They spent a good chunk of change putting pressure on the Flames in their own end.

The Flames would take the game’s first penalty as former Sharks prospect and prospect(?) Sena Acolaste tripped up new Canuck Radim Vrbata. Like last night, the powerplay didn’t look that great and Paul Byron managed to generate an opportunity sneaking behind Kevin Bieksa.

The period continued with the young Flames taking advantage of a Canucks icing, generating a few chances while Markus Granlund continued to showcase his complete game doing small things that make him look like a venerable NHL veteran. Granlund is clearly the best option if Mikael Backlund cannot start the season due to his abdominal injury he sustained in the offseason.

Bennett’s flare for showing off his skills continued. Listen, we all want him on a 8-9 game trial during the regular season. If he gets that, it really should be it. That’s enough to then set the stage to hopefully have a great season in Kingston of the OHL.

Corban Knight would have a good chance near the end of the period while the Canucks would push Ramo at the end of the first period and in a brief moment, Ramo looked very Barry Brust-like.

The period would end scoreless with the Canucks leading in shots 8-7.

Doug Carr would start the period and take over for Ramo. Carr, a former Lowell goaltender is looking to solidify a role in the AHL which looks like he’ll be backing up Ortio this year. The Canucks would start right away testing Carr and ensuring the goaltender was ready for the shelling that would come his way.

Markus Granlund would take a holding penalty sending Calgary to the PK. Thankfully Paul Byron showed up to play tonight; specifically on the penalty kill. Byron’s ability to eliminate opportunities and clear the zone make him a viable option this season.

The Canucks would capitalize again and make it 2-0 as Jannik Hansen snuck one past Carr. After the goal, Ryan Miller got to take the rest of the night off as Joacim Eriksson would step in of the rest of the night. The Flamesactually went shotless through the second period until midway through when Max Reinhart managed to register the first shot on net that period.

Nothing would really go well for the Flames in the second period despite Kevin Bieksa taking a penalty and the Flames really just failing to generate anything. The period would end with the Canucks outshooting the Flames 19-6 in the period and 27-13 in the game.

The third and final period would be a big snoozefest. It’s the only way to describe the game at this point. Brandon Bollig took a tripping penalty just over a minute in which lead to Radim Vrbata scoring and making it 3-0. Kenny Agostino continued to do what he could to make an impression which was a plus for fans. His play over the last few games continues to impress everyone. Look to see Agostino in the hunt for a roster spot on opening night.

It was determined unfortunately that Markus Granlund was injured/not coming back. We’ll look to keep an eye on things and hopefully it’s nothing serious. Besides the couple penalties tonight, Granlund has been great this preseason + training camp. 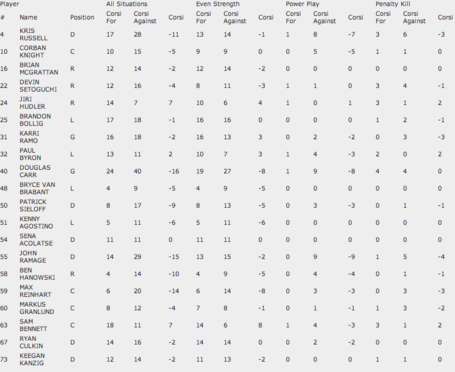 Long term, we're looking to break down the data at bit more thoroughly post-game and the next day. So look forward to seeing more of this in the futre.

Thanks for reading! The Flames take on the Avalanche next on September 28th in Denver.