For those of us who have toiled through this difficult period in Flames history, the prospect pool is the most exciting aspect of the team heading forward. What was once a bare cupboard a few years ago has been silently restocked with fresh, potentially elite talent (mainly due to sucking).

Having not seen the Flames live in two years (going to school in Quebec) I decided I would treat myself by watching the prospects scrimmage on Monday. Having drooled over the likes of Johnny Hockey, Sam Bennett, and Bill Arnold, I was finally going to see them play live.

Top prospects Emile Poirer, Mark Jankowski, and Jon Gilles were not playing due to injuries. Quite unfortunate, as all fans would love to see how much progress each player has made since last year.

- I got to the Winsport Arena a little bit late: all the seating in the arena was taken up, and nearly all the standing room outside it. I managed to get a spot by a side window, but it restricted my view of the far end of the arena. A lot of play was obscured, so I am missing a little bit of notes. At least I got to peek in at the coaches box every once in a while and gauge their reactions.

- As much as I tried to focus on every single player, I really only had good notes on Flames players. Sorry if you wanted a glimpse at some other players.

- Take all these notes with a bit of salt. I do give players some high praise, but it is important to remember that more than half of the camp roster is composed of players whose only taste of the NHL will be at this camp. The most experienced player was Kenny Agostino with his eight total NHL games. Not a lot of the invitees were very good, and it was easy for top players to play against them.

- The philosophy of truculence trickles down to even the smallest aspects of the Flames organization. Hunter Smith, Keegan Kanzig, and David Wolf received a healthy amount of playing time, mainly due to the fact that they were throwing out hits. Johnny Gaudreau, who tends to avoid contact with his skill, got a taste of the rough stuff, but reacted very well to it.

- Keegan Kanzig's reputation as a coke machine is well deserved. He is akin to the big kid in the class who insists that you play tackle instead of touch football at recess. He's not particularly good at the sport, he just loves running people over. I counted him as being the leader in hits (there is no scoresheet which can dispute that), but he also showed an improved hockey IQ, shutting down Gaudreau on a one-on-one situation.

- As predicted by everyone, the Gaudreau-Bennett-Harrison line ran the show. Harrison was the hanger on for the line, but still found himself in the right place to score a goal set up by Johnny Hockey.

- Perhaps giving us a taste of the 2015-16 Flames, Bennett and Gaudreau light up the competition. Soft hands, precise passes, and speed for days allowed these two to move play forward at nearly every opportunity, and they were rarely in the defensive zone.

- For some unknown reason, Gaudreau found himself on a line with Harrison and Casey Bailey late in the third. I recall him dancing around four players while the other two just watched. Definitely some work required with people not named Johnny Gaudreau.

- David Wolf looked better than advertised. He was a more functional Keegan Kanzig, going into corners and coming out with the puck, making smart hits, driving play forwards, etc. It may have been because of more professional experience (albeit, in the DEL), and because he is one of the oldest players there, but Wolf has only performed positively for the Flames at development camp.

- One of the invitees that I had good notes on was Jason Fram, Kanzig's defensive partner for most of the game. Currently undrafted, Fram has put up good production for Spokane in the WHL. While looking lost at some points, he did play a physical, yet intelligent, defensive game.

- Hunter Smith looked pretty average. Placed on essentially a checking line, his offensive contribution was standing close to the net.

- Controversial second rounder Mason McDonald proved to be the best goalie in the game. Constant bombardment from Bennett and Gaudreau resulted in only one goal allowed. He is big and athletic as advertised.

- Sam Bennett is amazing. He is 18 years old and the second best player at camp behind Johnny Gaudreau. That is all I need to write about Sam Bennett.

- Where was Morgan Klimchuk?

- Austin Carroll was doing what the Flames drafted him to do. Be big and hit people. He was also surprisingly fast.

- The Flames coaching staff, who sat in the room close to where I was standing seemed pretty impressed with what was going on. I looked over at one point while Johnny Gaudreau was doing Johnny Gaudreau things to see Hartley laugh out of amusement. Probably a good sign for Johnny Hockey's career.

Overall, the scrimmage showed progress from those who really needed to prove themselves. It's nice to know that Keegan Kanzig might one day be an NHL defenceman rather than a hired goon. Monday's game should spark optimism in fans who have been waiting a long time for something exciting to graduate from Calgary's development system.

Unfortunately, I will not be able to attend, or even watch Wednesday's scrimmage. Hopefully, there will be nothing but good things to hear from others. 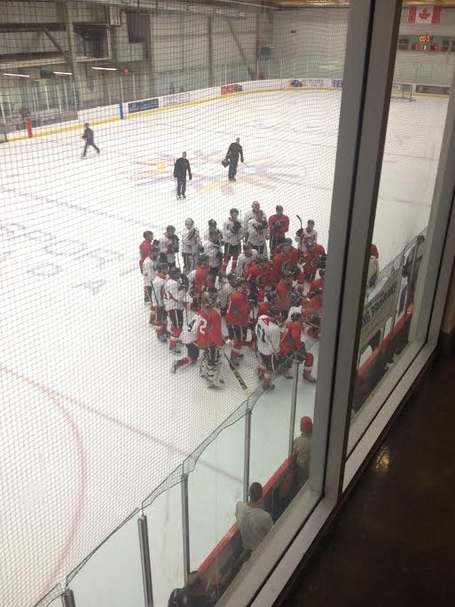 More from Matchsticks and Gasoline