The 2014-15 season is going to be a big one for many Flames prospects, and an even bigger year for two of their most important players.

There are three reasons the Flames had as good a second half of the 2013-14 season they did, and their names are Mark Giordano, TJ Brodie, and Mikael Backlund. Giordano will, unfortunately, be 31 by the time next season starts, but Backlund and Brodie still have a ton of meaningful years ahead of them. Hopefully, they'll be ones when the Flames are competitive. 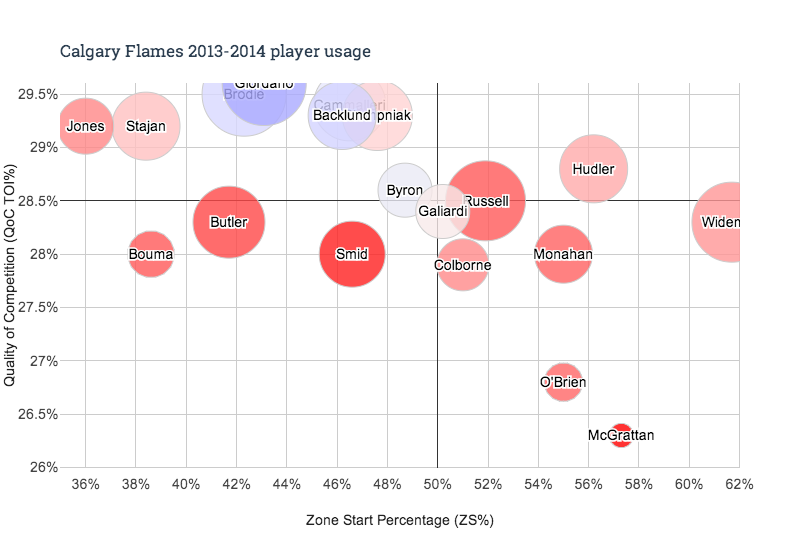 The aforementioned three players really stick out on that chart. They're just a few spots of blue in a sea of red, meaning they were part of a very small group of Flames that actually drove more traffic to the opponent's net than let it hit their own. When this trio was on the ice together, the Flames played much better. If you look at a list of the top CF% rel players (minimum 62 GP) in the entire league from last season, you'll find only the Flames have three guys in the top 15. If you go by FF%, all three are in the top 10.

It's not a coincidence that once Giordano and Brodie were consistently paired together, and once Backlund started getting top line minutes, the Flames, as a team, started faring much better.

These three players, along with a group of high quality, budding prospects headlined by guys like Johnny Gaudreau, Sean Monahan, and Sam Bennett give a lot of hope for the Flames' rebuild.

The major downside is Giordano's age. Last season may be the best season he'll ever have, and as he gets older, he'll likely be less effective. By the time the Flames are ready to compete, he probably won't be able to pull a Norris-caliber performance, and may not even be on the team.

They're also the two most important re-signings the Flames will face next season.

This is where past management messed up on their contracts. Both were signed to bridge deals - Backlund, a two-year deal with an AAV of $1.5 million, and Brodie, a two-year deal with an AAV of $2.125 million - in a "prove to me you have what it takes to play at this level" situation. The problem is both players were well on their way to showing they had the potential to be outstanding players, and could have justifiably been offered longer deals for more money: deals that would actually save the Flames money in the future.

Before signing their current deals, Backlund and Brodie were both consistently posting rather high CF% rels. In the 2013 lockout season, they led all regular Flames skaters with +4.6% and +4.5%, respectively. They were up there again the year before that, with Brodie at +8.3% and Backlund +5.4%. And before that, Backlund was right again at the top with +6.7% (Brodie only played three games that season). There are some names you wouldn't necessarily expect to see up there with them, but they either barely played or are infrequent. Backlund and Brodie, however, consistently stayed up there.

This was all before they were signed to "show me you're worth it" deals. Looking into their deeper numbers, and keeping in mind these were players just in their early 20s, they were already proving they deserved more of a chance than what was spent on them.

Not only that, but the type of contract they signed made little sense considering the direction the team was headed in. The Flames were going straight into a rebuild, jettisoning cap space and taking little to none in return. The time to have your best players on cheap deals is when you're competing, a situation the Flames have never been in while Backlund and Brodie have been on the team.

The Flames, today, are just barely going to make the cap floor. If instead they had signed Backlund and Brodie to longer term deals worth more money - think something like Roman Josi's contract - maybe they wouldn't have had to trade for Brandon Bollig (a trade that, at least partially, helped the Blackhawks get out of cap hell with no damage to their roster), or sign Deryk Engelland to a contract that baffled pretty much everyone.

And they'd have an added bonus: when the Flames are going to actually compete, and will need the cap space they currently have for depth that likely won't be all that cheap, they would have it. After last season, how good does Brodie on a seven-year, $4 million AAV deal sound to you? Because if he repeats his year, and in all likelihood, he will, he's going to cost more than that.

Backlund is still less heralded, but is coming into his own. A full season of him playing on the top line, and he could easily command a $5 million salary.

The Flames aren't a team that's hurting for money, so they should still be able to re-sign their most important upcoming RFAs. But when past management didn't take a justifiable chance on what they had, they may have made things more difficult for the future, actually competitive Flames. Calgary had a chance to get two crucial players on bargain deals, and may very well have lost that opportunity.