Flames vs. Senators Recap: Prospects are the best

On a day when basically half of the Flames lineup came from the Abbotsford Heat, the young players came through.

Share All sharing options for: Flames vs. Senators Recap: Prospects are the best

The trade deadline has come and gone. The Senators picked up our old friend Ales Hemsky, while the Flames sent Reto Berra to Colorado and Lee Stempniak to Pittsburgh for draft picks. After David Jones hurt his shoulder last game, and TJ Galiardi suffered a gym injury yesterday, the Flames recalled Max Reinhart and Corban Knight (for his first NHL game!)... and then Ben Hanowski, after Stempniak's departure left them short yet another forward.

With so many little Sparks (credit @TaylorMcKee_ - that's what I'm calling Flames prospects from now on) in the lineup, it was sure to be an exciting game!

Two minutes into the game, Reinhart stole the puck from a Senator trying to leave his zone. With just one Sen covering him, Reinhart sent the puck towards the centre of the ice where his old Abbotsford Heat linemate, Markus Granlund, was coming back in. The puck was bouncing but Granlund managed to get just enough control of it to get a shot over Craig Anderson's pad and in for his first NHL goal.

Look how happy he is! 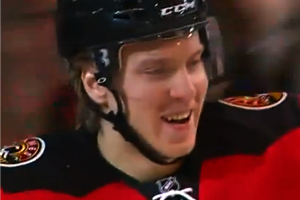 Just like that, Granlund was riding the first point streak of his career, having gotten his first assist in the previous game. Reinhart also picked up his first point of the season in his fifth game.

That set the tone for the start of the game, as the Flames continued to play so well it took nine minutes for the Senators to get a shot on net. But eventually the dam broke, and when Joni Ortio - in his second NHL start - was tested, he stood tall, beginning to justify Flames' management's faith in him.

The Flames started off the period with some penalty problems. First Hanowski was called for a high stick, and then, just as that penalty was expiring, Mark Giordano tripped Hemsky. Paul Byron nearly got a shorthanded goal, while Giordano got a clean breakaway when he exited the box following the penalty kill. Neither scored, but it foreshadowed what would happen when the Flames got their first powerplay of the period.

Just a minute later, the newly re-signed Chris Phillips was called for holding on Hanowski. As the powerplay was nearing its end, Kris Russell deked the Sens to keep the puck before passing it through everyone's skates over to Giordano. Byron skated down the slot and Giordano slap passed the puck right to him. It was an easy redirect for Byron to put the Flames up 2-0.

By the way, Knight screened Craig Anderson on the goal!

Towards the end of the period, Russell got into a fight with Bobby Ryan. Ryan lost his stick in a collision with Russell. Both dropped the gloves, Russell lost his helmet but was ready to continue the fight after Ryan was done. Russell is gritty.

Before the period could end, the Flames would increase their lead to 3-0. Jiri Hudler, with a perfect cross-crease pass from the corner of the net, found Joe Colborne who had a wide open net to shoot at.

TJ Brodie, not to be a youngster left out, then drew a penalty by getting superior position on Kyle Turris, frustrating the Senator into hauling Brodie down in a failed attempt to get the puck. Both Sean Monahan and Brodie nearly scored as the period came to an end, but were unable to follow through.

The period started with Clarke MacArthur hitting Hudler. Hudler went down awkwardly, and immediately a mass brawl broke out as every other Flame on the ice - Ladislav Smid, Chris Butler, Byron, and Monahan - found a Sen to stick up for their teammate. Byron, who took MacArthur as his dance partner, got an extra penalty, giving the Senators a powerplay.

The Senators were unable to score with the man advantage, and when the powerplay expired, Byron broke away for yet another scoring chance.

With a little under ten minutes left in the game, the Senators finally broke Joni Ortio's shutout. Ortio wasn't quick enough as Kyle Turris' shot just got by his outstretched glove and in off the far post.

The Flames quickly responded when Chris Neil took a penalty right after the goal. On the ensuing powerplay, Giordano froze everybody before passing to the still-here Mike Cammalleri. Cammalleri initially hesitated as he had to recollect the puck, but blasted it past Anderson to restore the Flames' three goal lead.

That was all the Flames needed. They were outshot, but the Sparks came through.

The Flames will be back at it on Friday when they host the New York Islanders. How many Sparks will remain in the lineup? We'll find out at puck drop at 7 p.m.!