In a turn of events that was neither predictable nor shocking, the Calgary Flames beat the Buffalo Slugs Sabres 3-1.

Buffalo took an early lead on a Drew Stafford goal, and managed to hold on to that lead until 18:58 of the second! It was almost impressive! Of course, The Holy Avenger Mikael Backlund was having none of that and along with Paul Byron decided to make some score effects magic.

Eventually Calgary's outright possession dominance paid off, and Joe Colborne scored on goalie-whose-existence-I'm-first learning-of Nathan Lieuwen with a fairly nice wrister. The best part of the night, was that the dominance didn't end there. 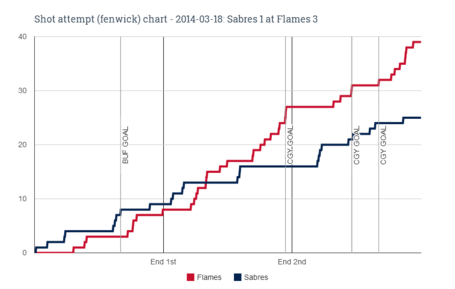 As this lovely graph (via Extra Skater, of course) demonstrates, Calgary's dominance didn't end after they evened the score. No- it continued, and it actually increased after the second and third goals filled Buffalo's nets. Mike Cammalleri scored on a tip in, but the pièce de résistance was Paul Byron's shorthanded goal. There really aren't words for it, so thankfully the NHL has given us video:

Just play that on a loop. It's beautiful.

So who were the stars hearts horseshoes blue moons of the night?

Not only was he nearly as dominant in possession as Mikael Backlund, but he had that gorgeous shortie. Those things don't happen everyday, as Flames fans know. What a great reminder that Calgary won the Regehr trade.

Hero. That is what he shall be remembered as.

I haven't really mentioned him yet, but the fact is he was terrific tonight. Even though he only had 14 shots against, a few were pretty good scoring chances and he only let one in. Nothing mind blowing, but solid through and through.