Flames vs. Ducks Recap: The Flames are the greatest team of all time

Touchdown, Calgary Flames. And the extra point is good.

Share All sharing options for: Flames vs. Ducks Recap: The Flames are the greatest team of all time

Take it away, Laddy.

The game started off slow, with the Ducks frequently icing the puck, and Joni Ortio there to make saves when they didn't.

And then the floodgates opened.

It all started with Mark Giordano's blast from the point. It was the Flames' first shot on goal, and it went in off the post with a little ping.

Then Kevin Westgarth welcomed himself back by taking a light hooking penalty. That turned out to be more than okay, because Paul Byron carried the puck up the ice on the kill, then shot it on net. TJ Galiardi was right there to redirect the puck up and over Jonas Hiller, giving the Flames a 2-0 lead.

The Ducks took their timeout after that goal. Oh, poor Ducks, you had no idea...

The Flames got their first powerplay of the night, this time off Hampus Lindholm's hook. And you can guess what happened there... Goal. Giordano's shot from the point rebounded off Mikael Backlund, who was in front of the net, and to Mike Cammalleri, who did not miss.

3-0 Flames. Hiller was pulled, his night over after having only stopped two of five shots. Better luck next time, Jonas.

But not even a goalie change could save the Ducks now. Frederik Andersen was welcomed into the game by getting scored on pretty much right away. Our Swedish lord and saviour, Mikael Backlund, simply put the puck on net... and in it went, off Francois Beauchemin.

Guess who got an assist on that goal? SOON TO BE HIGHEST SCORING GOALIE OF ALL TIME, JONI ORTIO, OF COURSE.

Sorry for yelling I'm just really excited. Oh and then Bryan Allen challenged Brian McGrattan to a fight because his team was down by four in the first period. McGrattan won, as was the Flames' way tonight. 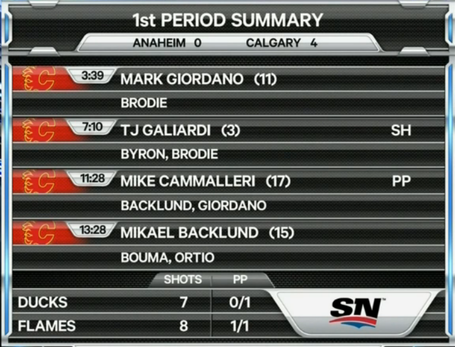 The period concluded with Chris Butler taking a penalty within the final seconds - and a standing ovation from the fans.

The period began with a shorthanded goal off of Chris Butler's penalty. Swedish Jesus and everyone's favourite for life, Backlund, was carrying the puck on a three on one. He shot it. It went in. He's the best. Everybody loves him.

Notable, here, that the Flames, up 5-0, were still blocking shots.

The Ducks eventually decided to put a dent in everyone's fun when Jakob Silfverberg sent Andrew Cogliano a nice pass from behind the net, and the former Oiler got the first puck past Ortio.

How did the Flames respond? Well, McGrattan generated two scoring chances with some sweet dangles and by being in perfect position for a great shot, so... that's how the Flames were feeling tonight.

This time the period ended with Joe Colborne nearly putting the Flames up 7-1, but Andersen stayed with him and actually made a save to keep his team down by just five.

The third period got off to a slightly less fun start, as Tyler Wotherspoon took the puck to his face - on his birthday, no less - and Backlund went away for a bit after blocking a shot. Both were okay, though, and would return to the game.

Also, Corey Perry is a dingus who went into Ortio's head... but at least he knocked his mask off. 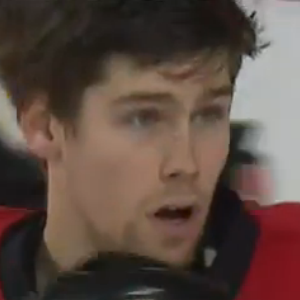 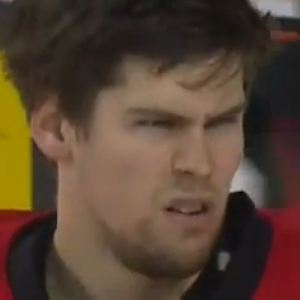 The Ducks would try to continue to make a game of it when Nick Bonino, with a perfect shot, sniped the puck shortside past Ortio. Hey, did you know the Ducks are second in the entire league? I know, right??

The knight just wasn't theirs. Corban Knight put one last dagger into the heart of the Ducks' charred corpse, scoring his first NHL goal to give the Flames a 7-2 final.

That's the face you make after your first NHL goal. And fun fact: Knight and Ben Hanowski are roommates down in Abbotsford, and are apparently tight (alongside fellow prospect Josh Jooris), so hey - extra special moment for them.

The Flames will be back at a slightly saner time this Friday, 6:30 p.m. MT, against the Dallas Stars. If you hadn't heard, Rich Peverley has been shut down for the season after collapsing on the Stars' bench Monday night. It's the right decision. All the best to you, Pevs.