The red-hot Los Angeles Kings visit the Saddledome tonight in a bid to extend their winning streak to eight.

Share All sharing options for: Kings at Flames Preview

The Flames are coming off a 2-1 loss to the Vancouver Canucks on Saturday night in which this happened (gif by Ari):

That's all I have to say about that.

Tonight's opponent: the sixth-in-the-West Los Angeles Kings (37-22-6), currently on fire with seven wins in a row—one of which was a game against Calgary on February 27th. That's the only game the Kings have won against the Flames this year so far; the season series sits at 2-1 in favour of Calgary with one more matchup left on April 9th.

The Kings have been enjoying the addition of Marian Gaborik, acquired at the deadline from the Blue Jackets, on their top line alongside Anze Kopitar and Justin Williams. Along with the second line of Tyler Toffoli, Mike Richards and Jeff Carter, the Kings are poised to do some serious damage tonight.

Los Angeles is the top possession team in the league right now as measured by even-strength FF%: they're at 56.1%, almost a full point ahead of the second-place Chicago Blackhawks. As you can see, they've kept this up pretty steadily throughout the season: 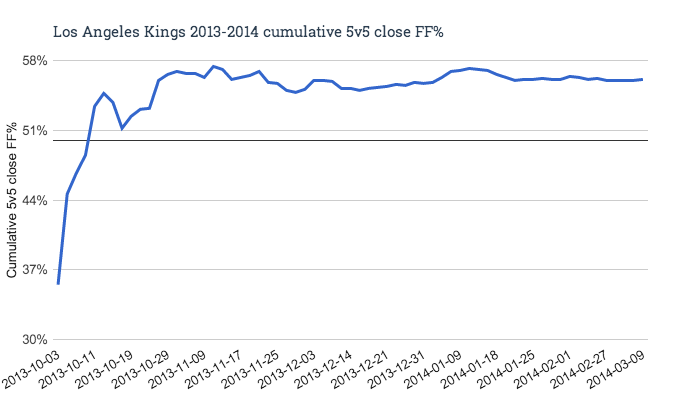 To further illustrate, here is the Flames' cumulative FF%: 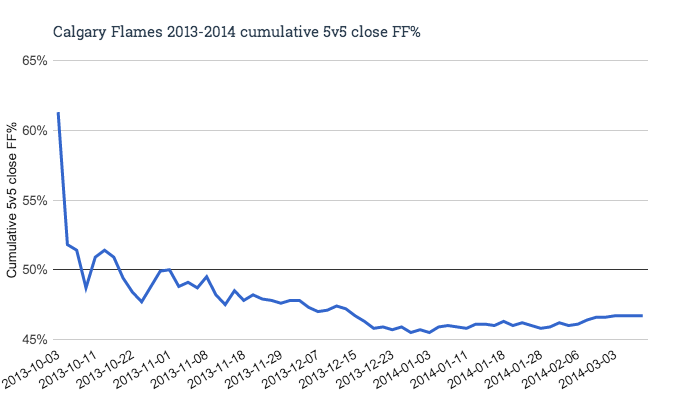 (as always, charts via Extra Skater)

You can expect the Kings to dominate play and generate a lot of scoring chances. The Flames' lineup of rookies posed challenges for the Islanders and the now-hilarious Canucks, but for a team this good even Lance Bouma's insane shot-blocking abilities may not be enough.

Calgary will once again be without Matt Stajan, on personal leave, as well as Karri Ramo, David Jones and Curtis Glencross as usual. Jiri Hudler and Dennis Wideman will also likely be sitting this one out.

Edit: And Kevin Westgarth. He's out too. I forgot about him (that was a nice time).

With that in mind, here are your projected lines for the Kings:

And your Calgary Flames:

Puck drop is at 7:00 PM MDT (how are we all doing without that hour today?) on Sportsnet West and radio on Sportsnet 960. Be sure to head over to Jewels From The Crown for more on the Kings in the meantime!