What a game where Calgary outplays a team for the whole 60 minutes and then still loses to a mediocre goalie. What a game, what a world!

In all seriousness, I could leave the following chart up and it'd be a pretty reasonable recap of the afternoon game between the Flames and Flyers. 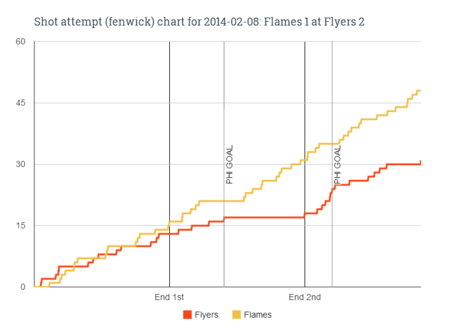 Despite the misleading colors on the chart, it's pretty clear that after the first period, Calgary dominated in possession. What's really bananas is you can't even pin that on score effects!

The first period was scoreless, and fairly neck and neck in terms of possession. Calgary ended the period with 16 Fenwick events and Philadelphia with 13. The Flyers, unfortunately, were a bit better at getting those shots actually on goal, leading with tally of 11 to Calgary's 8 shots on goal.