The Flames travel to Philadelphia to take on the Flyers in their last game before the Olympic break.

Share All sharing options for: Flames at Flyers Preview

This afternoon will be the final game before the Olympic break for both the Flyers and the Flames. Philadelphia is currently sitting in third place in the Metropolitan, one point ahead of the Columbus Blue Jackets, good for eighth place in the Eastern Conference; they'll be fighting hard to keep their spot today heading into the break.

Calgary, on the other hand, is still at 27th in the league, tied in points with the Panthers with a game in hand. At this point it's probably smarter to lose a bunch of games—it's obviously more fun to watch wins, but with the draft in mind, I don't think any of us can be disappointed to see the team string a few losses together.

Philly is 10th on the power play and 6th on the penalty kill. Their FF% has taken a bit of a dive recently (via Extra Skater): 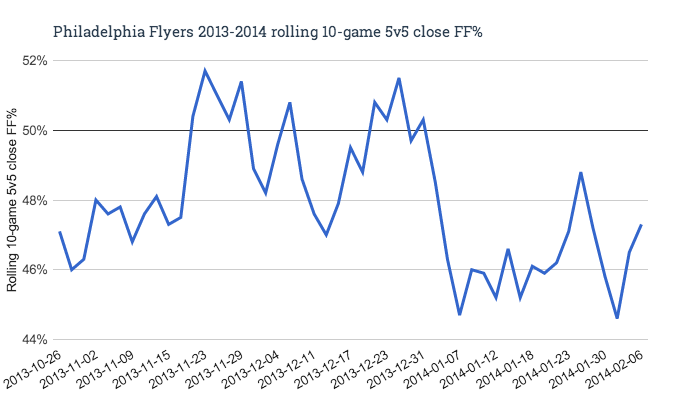 The Flyers are on a three-game winning streak, having beaten some good squads in the Avalanche, Sharks, and Kings. This game is going to be tough for the Flames, but their own long winning streak is not that far in the past; it's unlikely Calgary will roll over.