Mikael Backlund picked up two points and Reto Berra finally won in regulation as the Flames beat the Islanders at Nassau Coliseum.

Tonight as the play stopped with 2.6 seconds on the clock and the Flames led 4-2, your old friends at Sportsnet said "Reto Berra might win his first game in regulation!" Might. Less than three seconds!

Anyway: Reto Berra did, in fact, win in regulation. We did it!

The beginning of the game saw both teams turn the puck over often, but the Islanders ran all over the Flames when they had the puck—by the time the period was half over they had 9 shots to Calgary's 3. Reto Berra was kept super busy early on as a few turnovers led to some hairy situations, including about seven minutes in when Lubomir Visnovsky had trouble handling the puck, managed to keep it in anyway, and sent it flying toward the net.

Calgary took two holding penalties in the period, one on Matt Stajan and the other on Mikael Backlund, True Olympian. The Islanders didn't score on either one, bringing their disastrous powerplay streak to 0-for-26. Ow. Shots were 11-5 New York after one, with the Isles' first line playing a ton of minutes.

Early in the second Reto Berra gave the puck straight to John Tavares and then made a huge save on him. So it goes. A few big rebounds followed, and Tavares got another chance later with a wide open net but broke his stick (whatever we did to appease the hockey gods, let's do more of that). The Flames went back on the PK as Colborne was called for interference, but once again the Islanders failed to capitalize.

Shortly afterward, Kris Russell flipped the puck into the offensive zone, it hit Joe Colborne and fell right in front of Sean Monahan, who dumped it in for the Flames' first goal. It's the rookie's 16th goal of the year—third behind Nathan MacKinnon and Tyler Johnson.

That opened up the game a bit. The Flames got their first power play, finally, on a holding call on Thomas Hickey, and not long after Mikael Backlund threaded a great pass to Dennis Wideman who directed it up high. The puck hit the crossbar and went straight in for a 2-0 lead.

It wouldn't last long, though, as Thomas Hickey picked up the puck in the Flames' zone and was just one step ahead of Mike Cammalleri; the period would end 2-1 in favour of Calgary.

The Islanders have the most comeback wins in the third of any team in the league—they've won 7 times when trailing after 2 periods. They couldn't score on yet another power play (this time thanks to Ladislav Smid's hooking call), but they finally tied the game on a wrister from Calvin de Haan seven minutes in.

Calgary would reclaim the lead on a Matt Stajan shot that bounced off David Jones and into the net. There was some chaos in the crease as the puck crossed the line and the play went briefly into review, but the goal stood and the Flames wouldn't need any others.

They got one anyway, though, because Mikael "Sochi" Backlund potted an empty netter with just three seconds left on the clock to make it 4-2 and seal Reto Berra's first regulation win this season. It's February. 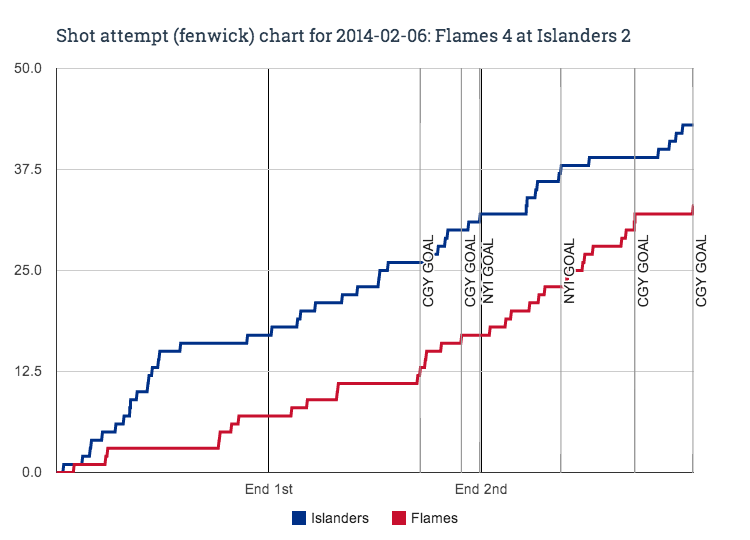 Although they did have 26 blocked shots tonight, Calgary probably shouldn't have won that game. (via Extra Skater)

There was undoubtedly some panic on Long Island when Thomas Vanek shuffled off the ice after a hit in the second period. He ultimately returned to the game, but things are a little shaky there, as the Islanders traded Matt Moulson for him in order to build a future but now don't expect to be able to sign him. There's talk that the Los Angeles Kings are interested in Vanek, and the Isles supposedly want to get a deal done before the Olympic roster freeze (Friday at 3 ET), so ... look for some news soon on that front.

After the game, though, it was announced that the Islanders had traded Pierre-Marc Bouchard and Peter Regin to the Chicago Blackhawks for a 2014 fourth-round pick. Getting busy!

Once again he had a multi-point game, tallying an assist on Dennis Wideman's goal as well as scoring the empty-netter. Earlier today Twitter was aflutter after Henrik Sedin officially pulled out of the Olympics; Backlund was named as his replacement by various media but nothing's official yet. We're expecting a decision tomorrow. IT HAD BETTER BE BACKLUND.

The Flames have one more game before the Refusal to Acknowledge Jiri Hudler Festival Olympics, and it'll be against the Philadelphia Flyers at the bright and early hour of 1:00 PM ET/11:00 AM MT. And then: Team Canada!