The comfort of disappointment

Sometimes it's easier to carry on in mediocrity than it is to navigate the extreme lows of fandom.

Share All sharing options for: The comfort of disappointment

I am a very emotionally driven sports fan, but I've only (only, she says, as a fan of the Calgary Flames) cried at sports twice, years apart. The more recent time was in December; I was alone in my apartment while Jarome Iginla skated around the Saddledome in a Boston Bruins uniform, and it felt like everything I had ever loved was slowly dying. I'd steeled myself for the inevitable moment but no preparation anticipated the force of that gut-punch.

The first time was ten years ago, and you remember what happened then.

I was fifteen in 2004. My high school was right in the heart of the Red Mile, and we'd close our windows on game days because cars would be honking starting at ten in the morning. It was the most surreal, thrilling, joyful few weeks of my life, and I had no idea how to handle it. Every game was terrifying. The swells of happiness and the dips into despair were extreme, and slowly more and more people lived them together, car flags flying, jerseys becoming acceptable work wear. Game 7 was horrible and wrenching, a city-sized balloon slowly deflating over a couple of hours, and I went into another room and cried while the sounds of the Lightning celebrating filled the house. I still clench up inside whenever someone mentions Ruslan Fedotenko, and I suspect I will forever. 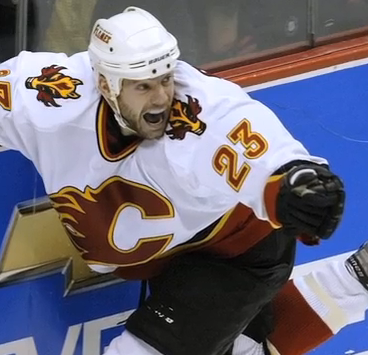 That year was the biggest sports disappointment I've ever experienced, and really the only one worth counting. Exiting in the first round a few years in a row doesn't matter, and as much as the 2013 Blue Jays season was hyped, it was over before it really got going. 2004 was it. That was my one moment as a fan where everything hung in the balance. It was something I wasn't used to and something I'm not sure I'll ever be able to properly handle, because you can't practice for it when you're gunning for the draft every year. It hurt a lot to think about for a couple of years—the lockout forced us to hear "Stanley Cup Champions, the Tampa Bay Lightning" for an extra season, which was excruciating—but eventually I managed to come to terms with it and make jokes about goal reviews and even get a Martin Gelinas jersey, finally.

At some point, though, it started to hurt again. Really hurt. I don't joke about 2004 anymore these days—in fact, I try really hard to avoid thinking about it all, like it's a bruise that I'm skirting around very deliberately in order to avoid any more pain. Even though the overwhelming majority of those months were the best time of my life, the sadness of the finish has slowly permeated my memories of it. Why, ten years later, is it so much more difficult now than it was?

My guess is that my experience is so far removed from events like that that they're starting to become terrifying. For me, sports usually go like this: I watch 82 or 162 games, getting a little bit sadder but a little more complacent as the season stretches on. I mourn quietly when the last pitch is thrown or the last horn sounds, and then I shake it off and hitch a ride on whatever playoff team seems the least hateable or the most compelling. There is a very clear division in every season between "stuff my team does" and "playoffs". I find myself a rooting interest because, like I said, I'm emotional; I enjoy things more when I feel like I'm living and dying by the outcome, even if the next day it doesn't matter to me anymore.

This kind of thing, as well as having a default second team through the regular season and playoffs when they happen, seems fairly common among those of us who cheer for losing teams. I've gotten heat for it before from (predominantly) fans of perennially winning clubs, though—through no fault of their own, they sometimes cannot comprehend why you would ever divide your interests, forgetting that the situation in which this happens almost never applies to them. I can imagine it is difficult to see that delineation if your team just steamrolls right through it every year, though I am unable to relate. I can't imagine not having a "playoff team" at all, and I can't really understand what it's like for my playoff team to be mine.

I say that I'm used to disappointment, but more accurately, I'm used to constant, tiny letdowns, game-by-game or play-by-play misfires. A day when Reto Berra allows a couple of softies, a blown third-period lead, a mediocre finish out of the playoffs but without an exciting draft pick. You don't have very far to fall if you haven't got any hope to start with, and though that sounds terribly depressing, it's also very predictable. I am not expecting the Calgary Flames to break my heart anytime soon, unless maybe they (I don't even want to type this sentence) trade away Mikael Backlund. But this is the problem, I think: I am used to, even comfortable with, being not quite good enough.

I say that I'm used to disappointment, but more accurately, I'm used to constant, tiny letdowns.

Once you start getting complacent, big changes, or even moderate ones, start to seem really scary. This how it goes in both life and in sport, and I think I'm starting to see myself in my sports fandom a little too much. You know how you're afraid to start something big or make a move, because what if you fail? What if it's awful? This is what's happening to me now. Whether or not it happens soon, I'm a little afraid to see the Flames be good again, because what if they never do quite enough? This massive insecurity makes even less sense because I have no control over it—Calgary winning games doesn't have anything to do with anything I do in my life or my work. But here, again, is the thing about being such an emotional sports fan: it feels like it does. All I want is to see the Flames win a Stanley Cup in my (conscious) lifetime, but the thought of them coming that close and failing again is something I'm not sure my heart can handle.

So here I am instead, living out the small disappointments in uneasy contentment—they aren't winning, but at least my heart knows what to expect. I am disappointing in my routines. So are they. When the time comes, I hope I'll be strong enough to get past that, and I hope it won't take ten more years before these memories are happy ones again.