The 24-year-old is leaving his hockey career behind him.

Share All sharing options for: Lane MacDermid to retire

Sad news out of the Flames front office today as Pat Steinberg reports that Lane MacDermid, the 24-year-old acquired from the Dallas Stars in November for a 6th round pick, has filed his retirement papers. According to Conroy, he'd lost his enthusiasm for hockey and has decided to pack it in at a very young age, choosing to focus on other things.

The Lane MacDermid situation got a little clearer. He's officially filed his retirement papers, according to Craig Conroy. #Flames

Conroy told us MacDermid had lost his passion to play, so is moving on from his hockey career. #Flames

Pretty rough to hear a 24-year-old call it quits on a hockey career. I'm not sure if we'll get any more details about what happened, but it's clear MacDermid has had time to think about this and doesn't feel like continuing in the AHL/NHL is what he wants.

MacDermid spent small parts of three seasons in the NHL with the Flames, Stars and the Boston Bruins, playing a total of 21 games and accumulating four points (2G, 2A) and 36 penalty minutes. He spent the rest of his time in the OHL and later in the AHL, packing on a lot of PIM. Notably, he was traded from Boston to Dallas in 2013 for Jaromir Jagr (18 years older than MacDermid and still playing!).

All the best to Lane, and fingers crossed that this isn't a case of the Flames stomping on young aspirations. 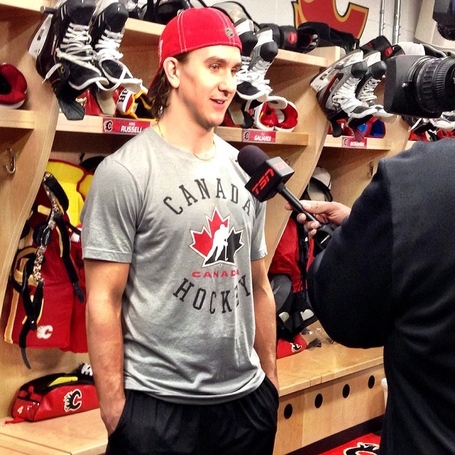 I dunno, I think Hockey Canada suits him.