Fresh off a win over the Avalanche, the Flames visit Phoenix tonight hoping to continue their good fortune.

Share All sharing options for: Gameday Preview: Flames at Coyotes

The Flames scored actual goals last night! Four of them! It was a welcome offensive explosion after the terrible dry spell over the holidays, when the team scored just one goal in four games after their 4-3 shootout win over the Blues. The rebuild is here, but at least we have some occasional bright spots.

Tonight the Flames visit the Phoenix Coyotes for their third meeting of the season. The teams split the first two, with Calgary losing the opener October 22nd in Phoenix 4-2; it was Mark Giordano's first game out with the broken ankle he suffered against the Kings, and Mike Ribeiro scored two goals to extend the Coyotes' point streak to seven. Joey MacDonald was in goal that night. Remember that guy? Me neither.

The other matchup was December 4th at the Saddledome, which the Flames won decisively 4-1. Gio notched a goal and an assist in his triumphant return from that same injury, and Matt Stajan and Lee Stempniak combined for the Flames' league-leading (at the time) sixth shorthanded goal. Those were happy times. Calgary's tied with Boston for second in shorties; Carolina leads the NHL with seven.

The Coyotes currently sit in eighth place in the West, tied in points with Minnesota but with three games in hand. They'll be fighting to hang on to that spot as their homestand continues this week against the Flames, Wild, and Ducks. 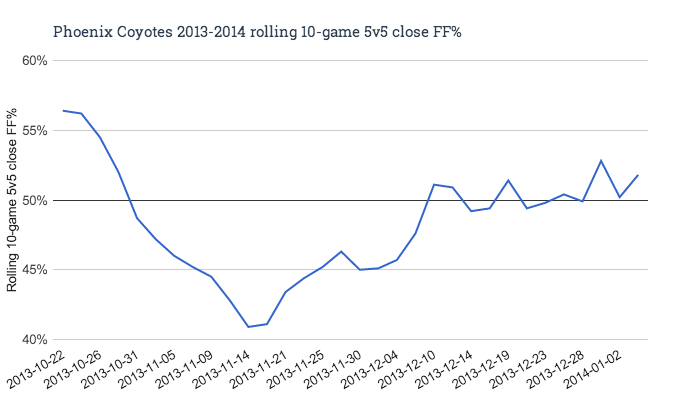 The Coyotes took a nosedive in mid-November but are steadily climbing back up; their season Fenwick% sits right around 50%. Calgary is at about 46.5% for the year. The key for Calgary will be to keep up the offensive pressure as long as they can. The Coyotes have played in some close games in the past few weeks—going back to December 19, six of eight games went to overtime and two to a shootout. They're 0-for-11 on the power play in the past week, though; Reto Berra will hopefully keep the Flames in the game, so if they can keep up a solid PK they'll have a good chance at this one.

For an detailed explanation of Fenwick, head over to Pension Plan Puppets.

Hartley ran with these last night—we'll update as more info is available:

David Jones suffered an eye injury on Friday against the Lightning and is expected to be out a while. Curtis Glencross (high ankle sprain) and Kris Russell (MCL sprain) are still on the IR, and Blair Jones' torn meniscus is going to keep him out for some time as well.

For the Coyotes, defenseman Oliver Ekman-Larsson is day-to-day after an upper-body injury suffered against the Columbus Blue Jackets on a hit by Derek MacKenzie. He is not expected to play tonight. Shane Doan returned from his prolonged illness on the weekend.

And let's not forget a very hearty congratulations to Coyotes netminder Mike Smith for being named to the Canadian Olympic roster this morning. His fellow goaltenders are Vancouver's Roberto Luongo and Montreal's Carey Price.

For more on the Coyotes check out Five For Howling!