Flames vs Sharks Recap: NO RAGRETS

The Flames have won FOUR GAMES IN A ROW and scored multiple goals each time and everything.

Share All sharing options for: Flames vs Sharks Recap: NO RAGRETS

Okay, so it wasn't last night's insane 59-save shutout by Ben Scrivens, but the Flames roundly beat the San Jose Sharks at the Saddledome tonight and it was awesome.

There was some good puck movement in the first, and after five minutes both teams had managed to limit the other's chances (shots were 1-1 after five). Calgary got a few good scoring chances out of David Jones and the Monahan line. Around halfway through the period, Mikael Backlund put on a show getting the puck around Matt Irwin to the net, and Lee Stempniak beat Dan Boyle for the loose puck. 1-0 Flames, just like that.

The Flames got a power play shortly afterward on a sort of weak holding call on Joe Pavelski, but they weren't able to capitalize—they had some trouble keeping control of the puck in their zone, even though the Sharks had trouble getting out (great work, everyone). They did control play for a great deal of the first, and were outshooting the Sharks 10-3 after 14 minutes; San Jose would come back a little in the final few minutes, and the period ended with shots 12-8 in favour of Calgary.

Lee Stempniak had a perfect 100% CF% after 20! Even crazier, the Flames' official account actually tweeted about CF%.

In the intermission the Sportsnet broadcast just talked about Mikael Backlund's confidence and how he would never have done such flashy things three months ago (PROBABLY BECAUSE BOB HARTLEY WAS HEALTHY SCRATCHING HIM). It was dumb. Backlund rules.

Speaking of Backlund, four minutes into the second period he flipped the puck over to good old Mark Giordano, who sent it flying into the net for the Flames' second goal. It extended the captain's point streak to eight games (a career high!).

Calgary got super outshot in the second, due in part to the Sharks' power play after T.J. Brodie took a cross checking penalty. Karri Ramo made a few spectacular saves in the period, one aided by Mark Giordano in the crease. Tommy Wingels would take a goalie interference penalty near the end of the period, giving the Flames their second power play, but they ended up unable to do anything with that one, either.

My intermission notes say "MORE LINE BRAWL GARBAGE," which translates to a question that began "There seems to be something different about the team's camaraderie and play after what happened in Vancouver". Can we all agree to just quit it? It was two weeks ago and all the defensemen played 30 minutes and it sucked, ok, thanks.

Anyway, the Sharks finally got on the board and snapped their shutout streak with Eriah Hayes' first NHL goal. The puck bounced off multiple Flames and eventually ended up in the back of the net. Whatever. Congratulations, kid.

Goaltender Alex Stalock had to be pretty quick on his feet right after that goal—the Flames poured on some pressure and almost made it 3-1, but he managed to come up with some huge saves and keep the score close. Not for long, though, as around 14 minutes into the third Joe Colborne flipped the puck to Sean Monahan, who was right in front of the net, and he knocked it in for his team-leading fifteenth of the year. Always great to break this one out:

The Flames played great in the third, managing a lot of shots and mostly controlling the play. The Sharks looked like a team who had had 100 shot attempts the day before.

The icing on the cake: With about a minute left and Stalock on the bench, Jiri Hudler scored an empty netter to make the score 4-1 and seal the victory. Incredibly, that was the Flames' first empty net goal of the entire season—the last team in the league to score one. Finally! 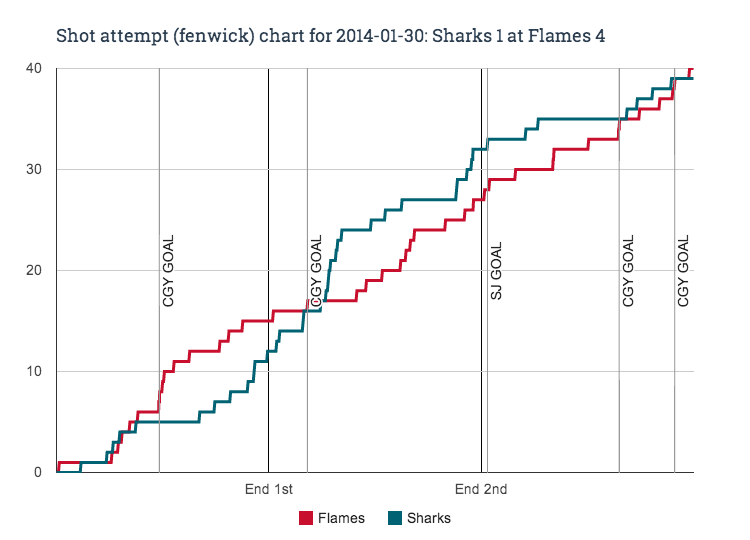 Apart from that bit of flatlining right after the second Calgary goal, nice work, boys. (Graph, as always, thanks to the fine folks at Extra Skater)

What is this, even 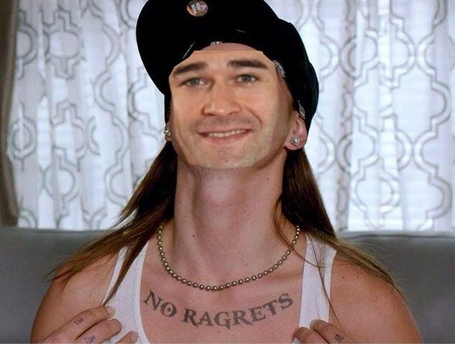 Thank you to Book of Loob for that masterpiece.

Four wins in a row!

Let's not make too big a deal out of this. Beating the Sharks is so easy, even the Oilers can do it.

Next game is against the perpetually thrilling Minnesota Wild (Saturday night on Hockey Night in Canada). See y'all then!