The Flames took a night away from former first rounder and now four goal-scorer Eric Nystrom. Coming back from a 4-2 deficit, goals from key young players propelled them to a 5-4 shootout win.

The last time the Flames won back-to-back games was Dec. 12 and 14, with overtime victories against Carolina and Buffalo. They won the last game, and prior to this game the Nashville Predators have three straight wins on them, so this game would've been a special one to win. Well, about that...

The puck was bouncing a lot at the start of the game. On one end, it bounced in front of Devan Dubnyk, ultimately trickling just wide of the post. On the other end, it got left in the slot. Eric Nystrom was the first to get a hold of it, and didn't let go until he'd shot it just over Karri Ramo's outstretched pad and in the net to put the Predators up by one.

The Flames would soon answer back when less than a minute later, Paul Gaustad was called for holding on Kris Russell.

The pre-game featured Lance Bouma heavily, and for good reason: last game he scored a rather nice goal, and his ice time has been increasing as of late. The 23-year-old found himself getting powerplay time, and it did not go to waste. Being a big body in front of the net, he - along with Seth Jones - screened Dubnyk, allowing a shot by Mark Giordano from the point to go in and tie the game at one.

Gio's eighth goal of the season marked six consecutive games with a point for him - a new career high for the Flames' captain.

The bouncy puck was back again to start the second. Bouncing towards Ramo, the goalie got his blocker on the puck to knock it down. Unfortunately, Nystrom was quicker than any Flame and got to the puck first to tap it five hole for his second of the game, putting the Preds up 2-1.

A giveaway by Shane O'Brien, a bad angle shot by Gaustad, a tip by Nystrom for his first career hat trick (against the team that drafted him, no less), the Predators up 3-1, and Ramo's night was over. He only stopped 9 of 12 shots before getting pulled.

Reto Berra came in to replace him, getting his first game action in four games since he gave up four goals to the Winnipeg Jets.

The Predators controlled most of the play throughout the second period, but towards the end the Flames started putting up more chances. The Lance Bouma - Matt Stajan - David Jones line was buzzing around the offensive zone, while TJ Brodie and Kris Russell were there to keep it alive on the backend. In Brodie's case, he jumped up into the play numerous times and got quite a few shots off. Nothing went in, but it was a good shift of sustained pressure.

With just one second to go in the period, Rich Clune was called for holding on Giordano, giving the Flames a powerplay to start the third.

Despite spending much of the powerplay chasing the puck and trying to get in the Preds' zone, the Flames made it count. Stajan cut off a pass by S. Jones and left it sitting neatly for D. Jones in the slot. D. Jones, with a perfect shot, scored, getting the Flames back within one.

It was David's first goal since November 29, when he scored two against Anaheim in a 5-2 loss.

Nystrom would soon reestablish his two goal lead, however. Matt Cullen gained the zone and dished the puck to him, and Nystrom slid it five hole on Berra for his fourth of the game. Nystrom four, Flames two.

But fear not, for the Flames' thing this year is to work hard and not give up, and here's the fenwick chart (courtesy of ExtraSkater) to prove it: 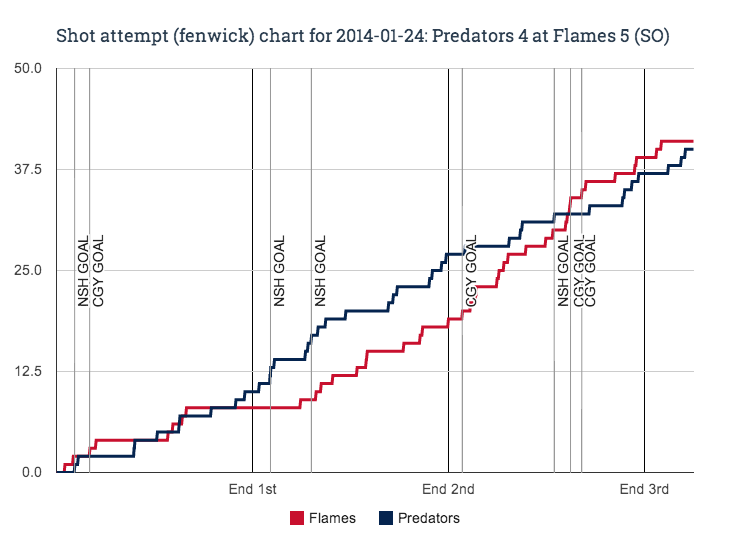 Craig Smith tripped Wideman, leading to a powerplay for the Flames. Twenty-four seconds later, Gaustad was called for a kinda week hook on Brodie, giving the Flames a 1:36 five on three to work with. Both Flames goals came on the powerplay, so this boded rather well for them.

The Flames delivered. After Giordano hit the post, Russell would take a shot from the point. Mikael Backlund tipped it to put the Flames back within one.

Just a minute later - and back on even strength - Brodie, who was incredible all night, just barely kept the puck in the offensive zone. He took a shot from the point, and with D. Jones waiting in front of Dubnyk to tip it in, the Flames tied the game.

The Nashville Nystroms tried to get the lead back. As time was ticking down in the third, he almost got a breakaway, but Russell was there to hold him off, and the game went to overtime.

The Flames - and especially TJ Brodie - dominated the extra frame to start, but about halfway through the Predators took over. To keep it short and sweet (something I'm not good at, I know): overtimes are usually exciting as hell, and this one was no exception.

In round two, Dubnyk tried to pokecheck Jiri Hudler and failed. Hudler roofed it to put the Flames up by one. David Legwand, the Preds' second shooter, missed.

Lee Stempniak had the chance to win it for the Flames, but Dubnyk stayed with him and stopped the puck with his stretched out leg. Roman Josi needed to score to keep the shootout going and did in a sad case of Swiss-on-Swiss goal scoring.

In came Former Shootout Hero Sean Monahan, who regained that title by making a nice little move to open Dubnyk up and score five hole. It was Monahan's first shootout goal after three straight stops.

Ryan Ellis was up for the Preds to try to extend it again. He... didn't. It looked like he had Berra beat, but Berra stopped him in a save best left for you to just watch, because it was a beauty:

The Flames will get their first three-day break since Christmas before they host the Chicago Blackhawks Tuesday night at the 'Dome. The last time they had a long break after a comeback shootout win they got shut out a bunch of times, so... hopefully that doesn't happen again.