Share All sharing options for: Coyotes at Flames Recap: A Home Win!

The Flames went into this game having lost seven straight at the Saddledome. As you might imagine given those results, the crowd was pretty much silent to start off the game—so much so that I forgot they were playing in Calgary and wrote down "Flames at Coyotes" instead. Solid.

The opening period was actually pretty good, exceptionally so when compared to the last Flames-Coyotes matchup. Calgary allowed a lot of shots against (Phoenix finished the frame with 11 to Calgary's 6) but Karri Ramo was outstanding, making a few really amazing and fast saves against the likes of Shane Doan, Mike Ribeiro—that'll be on the highlight reel—and Oliver Ekman-Larsson.

Play started out pretty end-to-end, with neither team dominating outright but neither team able to hang onto it in the offensive zone for very long. Kevin Westgarth took two (TWO!) penalties in the period, though, and the Coyotes kept the action around the Flames' net for almost all of those four minutes. The Yotes broadcast noted that Hartley would probably be pretty unimpressed with that—oh yeah, fourth liner taking two minors in twenty minutes? not ideal—so, you know, please bench him. Come on.

The Flames got a good shot off the draw after the powerplay and the ensuing break saw Lance Bouma and Keith Yandle get into a little bit of a scuffle. Nothing further happened with that, though, and then a Coyotes turnover not long after led to T.J. Galiardi skating right around Yandle and snapping the puck to Sean Monahan, who flipped it in at the far post to open the scoring. It was Calgary's first time scoring at home in the first period in eleven straight games (that's a convoluted fact) and the Saddledome crowd definitely appreciated that one. So did we:

The Coyotes came flying out of the gate at the start of the second, pouring on some offensive pressure in the hopes of tying the game. At four minutes in, Ekman-Larsson took a hooking penalty, which looked like it might give the Flames the jump start they needed to keep up with the action; instead, the Coyotes managed to dump the puck out of their own zone a number of times during the power play and Calgary didn't really stay in control, managing only two shots on goal.

Shortly afterwards, though, a Coyotes turnover led to a great pass from TJ Brodie to Lance Bouma that landed squarely in the back of the net to make it 2-0. Karri Ramo picked up the secondary assist on the goal (I love goalie assists!)—- his last point was recorded on March 17th, 2009 versus Toronto. Not a bad day for that guy.

The Flames picked up another chance when Mikkel Boedker was called for a tripping penalty, but instead the Coyotes managed to shove the puck back to the Flames' net. A slow pass found its way to Lauri Korpikoski and then to Antoine Vermette, who potted a shorthanded goal for his fifteenth on the year. Not ideal, but it was a pretty long range shot and there was barely anything Ramo could have done about it. 2-1 Flames.

Later in the period during a bit of a scuffle around the Phoenix net the puck came loose for a brief moment, floating in front of the blue line before Matt Stajan, fresh off his contract extension, picked it up and hit a fine slap shot to the top shelf for the Flames' third (THIRD!) goal. End of period: 3-1 Flames. What? Is that even allowed?

Back to a lot of end-to-end action as the Coyotes tried to get themselves back in the game and the Flames hoped to at least hold onto their two-goal lead. Doan, Ribeiro and Moss managed a handful of pretty good shots around the four-minute mark, but somehow Ramo got a piece of all of them to keep the score intact.

About seven minutes in, though, a good Doan shift ended in him receiving a great pass from Keith Yandle and catching Karri Ramo out of position with a snap shot to make it 3-2.

After that the Coyotes poured on the pressure here and there trying to tie it up (the Phoenix broadcaster put their bets on Vermette and Vrbata to score the tying goals), and the Flames missed a few great chances late in the period when they tried to extend their lead. With two minutes left the Coyotes pulled Mike Smith; Sean Monahan got a great shot on the empty net but seemed not to have realized that Smith wasn't in it until too late and shot just wide. The extra attacker helped Phoenix generate a ton of last-minute offensive pressure, and with 1.7 seconds left there was a huge chaotic mess in the Flames crease when it was unclear if Brodie had trapped the puck under his glove. The Coyotes broadcasters called for a penalty shot, which obviously didn't happen.

And the Flames win! 3-2 in regulation at home!

what do you think it feels like to lose to the Flames in regulation? I bet it feels really bad and I think that's great

This is already a pretty verbose recap so I'll keep this part short. Here is the shot attempts graph, courtesy Extra Skater: 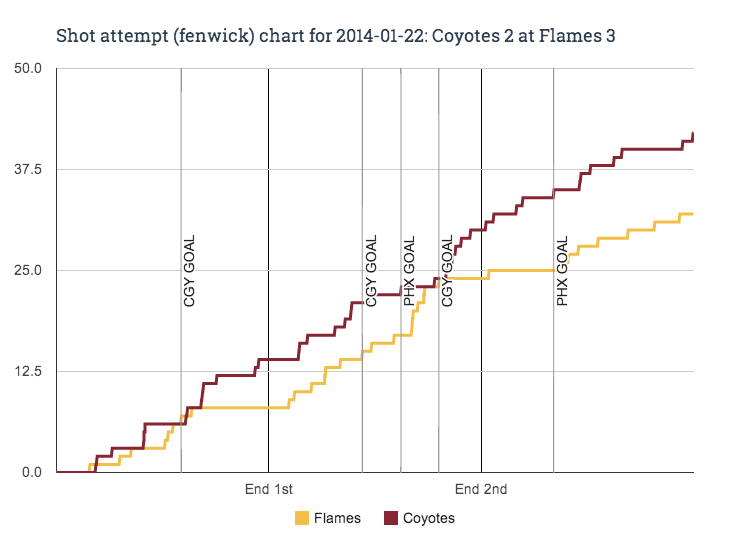 As you can see, Calgary got pretty consistently outshot through the entire game, and flatlined alarmingly at points right after they'd scored a goal. If it wasn't for Karri Ramo this game could have been significantly uglier. First star to him for keeping this team right in the game all night.

(A star has to go to Sean Monahan's eyebrows as well.)

And that's it! Check out Five For Howling for the other side's perspective on how tonight went. Calgary plays at the Saddledome again this Friday against the Nashville Predators—game time 7PM Mountain, 9PM Eastern, on SN-Calgary. See you then!