Matt Stajan's extension, and what it means for future Flames centres

On Jan. 20, Matt Stajan signed a four-year extension to stay with the Flames. While the Flames have a myriad of centre prospects getting ready to play in the NHL, it was the right move to retain him.

Share All sharing options for: Matt Stajan's extension, and what it means for future Flames centres

In case you missed it, yesterday it was announced that Matt Stajan had re-signed with the Flames for four years, with an annual average value of $3.125 million. It's a slight step down from his previous contract, a four year deal with an AAV of $3.5 million and a modified NTC.

Stajan hasn't been great, but he's been good, and worth re-signing for reasons Arik pointed out yesterday here.

The deal is probably a year too long, but that's okay. The cap hit is more than fair, and not an issue for the Flames at this point in time: the Flames currently have about $24 million in cap space, and the cap is expected to go up to about $71.1 million next season. If anything, they may need more deals such as this in the short-term in order to reach the cap floor.

Matt Stajan isn't young. At the age of 30, he's one of the team's oldest players, and definitely the oldest centre. In addition to Stajan, this season the Flames have mostly used Blair Jones (27), Ben Street (26), Mikael Backlund (24), Joe Colborne (23), and Sean Monahan (19) down the middle.

That's a really young group. Jones and Street haven't centred a top six line this season, probably won't, and likely aren't in the Flames' long-term plans. Excluding them makes the group even younger.

Backlund has played himself onto the top line. Even though he's only 24, he's established himself as a responsible NHLer. While he doesn't put up the points one would expect of a top line centre - 19 in 49 games, which should be noted, is good to tie for fourth on the team - he plays top competition. Hartley entrusted him to shut down Sidney Crosby, and for the most part, he succeeded. Backlund can be counted on.

Colborne isn't even being used at centre anymore. With the choice between having him centre Kevin Westgarth and Brian McGrattan, and having him on Monahan's wing, Hartley as opted for the latter, as well he should. Colborne may or may not be with the Flames long-term, but he's better served playing with a skilled player than on a line unlikely to contribute (fluke goals against Vezina-nominated goaltenders aside).

Monahan is a 19-year-old rookie. While he's one of the team's best young players, he's still just that: a young player. He plays some of the most sheltered minutes on the team. Via Greg Sinclair's player usage chart software at Some Kind of Ninja, for anybody listed as a centre for Calgary: 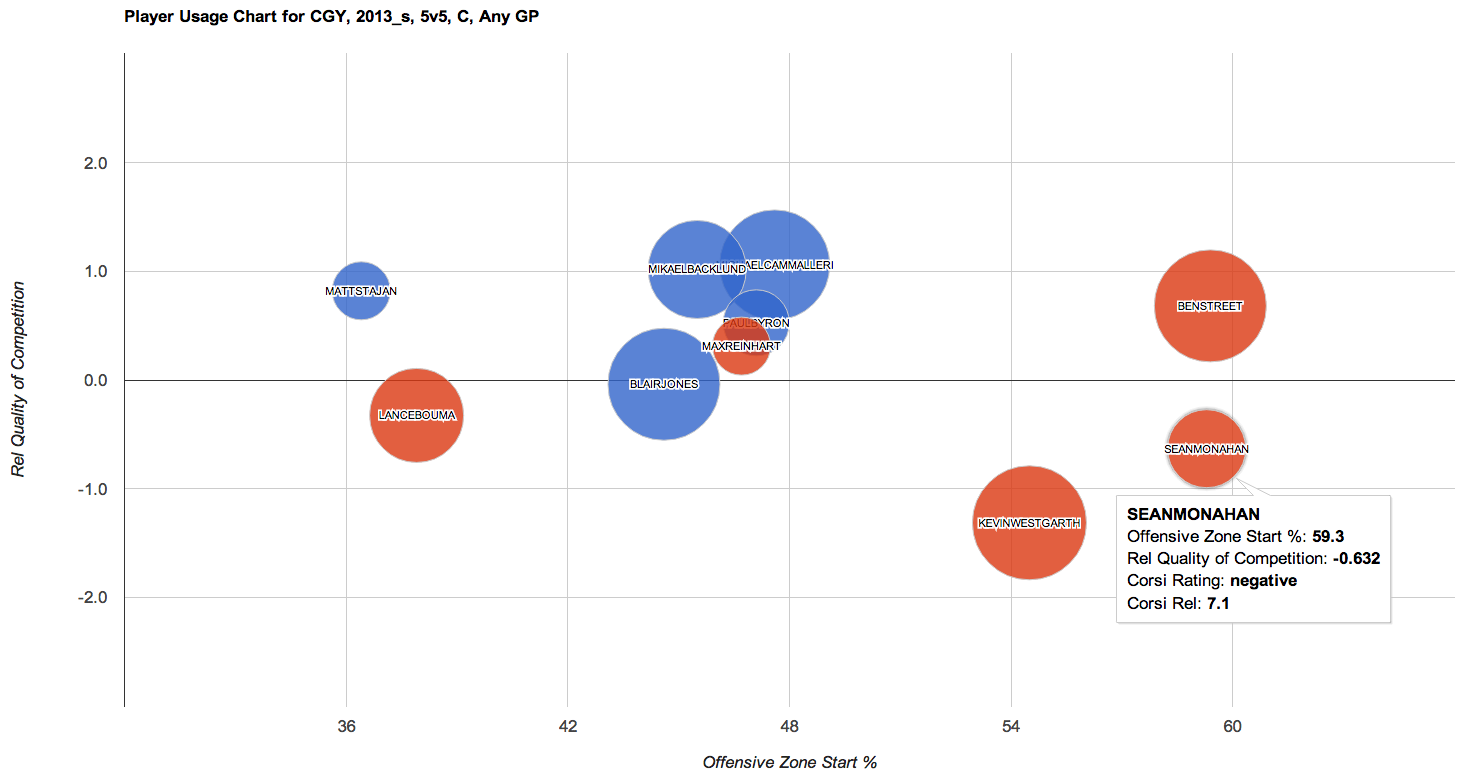 The chart shows Monahan gets the easiest zone starts and lowest quality of competition among regular Flames centres. And that's okay. He's a rookie; he's still learning how to play at the NHL level. He shouldn't be thrown to the wolves. Stajan's presence helps prevent that.

But that's just this season. While Monahan's the best one, the Flames still have a few up-and-coming centre prospects who should be challenging for spots on the Flames throughout the duration of Stajan's contract.

Max Reinhart (21) is probably the one closest to a regular NHL shift. Reinhart made his NHL debut towards the end of last season, playing 11 games for the Flames after the trade deadline and putting up three points, including his first NHL goal. He's played in four games for the Flames this season, but has only averaged 8:46 of ice time and is pointless. However, in Abbotsford, he's performing extremely well, with eight goals and 30 points in 35 games. He's third in points on the Heat.

Next in line is likely Markus Granlund (20). The Finn is playing his first North American season this year, and is doing well, posting 16 goals and 28 points in 37 games, good to tie for fourth in points on the Heat. In addition to that, he was called up to the Flames for the final two games of 2013 in case of injury. While he was a healthy scratch, the fact that the Flames brass chose to call him up speaks volumes as to where they think his game is at. There's still a chance he plays his first NHL game this season.

Following Granlund is Corban Knight (23). The Flames traded a fourth round pick to acquire his rights after he refused to sign with Florida, the team who drafted him. Probably the main reason Knight chose the Flames was the fact that they were his best shot to get in the NHL faster, since they're a team with little centre depth. In his first pro season, he has nine goals and 28 points in 41 games, tied for fourth in points for the Heat - albeit in more games than Granlund. He challenged for a roster spot throughout the pre-season - and even got the NHL number of 10 to start with - and may play his first NHL game later this season as well.

Rounding out the current centre prospects is Bill Arnold (21), currently in his senior year at Boston College. Arnold will likely sign with the Flames upon graduating, and start his pro career playing with the Heat. He currently has eight goals and 33 points in 23 games for BC, good for third on the team behind linemates Kevin Hayes and Johnny Gaudreau (the Flames' most hyped prospect).

And finally, the Flames may gain even more high level centre prospects throughout Stajan's contract, such as Sam Reinhart and/or Connor McDavid. The two are projected to be top picks in the next two NHL entry drafts, and the Flames will likely be in striking distance to draft both.

Stajan's Role in the Rebuild

While the Flames currently have a pretty decent group of centre prospects, all with promise to become NHLers, the fact remains that they're all still young, and not all of them are guaranteed to make it. While the Flames are rebuilding, it's natural to want to see young players in the lineup every night, but it's not feasible for them or for the team. It was assumed Knight would be in the NHL to start the season, but the Flames decided he needed time in the AHL first, and he's been able to work on his game there without getting killed against NHL competition.

Veteran presence and depth is important for a rebuild (see: Oilers, Edmonton). If the Flames didn't re-sign Stajan, they would have been left with just Backlund for reliable centres, and that's it.

The prospects will have their chances, and those who deserve it will fight their way onto the team through their own merits. Stajan staying with the Flames for another four years doesn't change that. Instead, he helps by providing a buffer for young centres, taking the load off their shoulders while they focus on learning to become NHLers.