Having calmed down since their last game, the Flames played a well-fought game against the Sharks, falling just short by a score of 3-2.

Welcome back, Kris Russell! Russell, who established himself as one of the Flames' top four defencemen at the start of the season, returned to action after missing the past 13 games with a sprained MCL. This was the first time all four of the Flames' top defencemen - Mark Giordano, TJ Brodie, Dennis Wideman, and Russell - played together since October 21, when Giordano was injured when playing the Kings.

This was also the first time the season's starting top four have played since the trade for Ladislav Smid, marking it the first time this season that neither Shane O'Brien, Derek Smith, nor Chris Breen dressed those few times he was here.

Anyway! The game kicked off with a flurry of chances for the Sharks as they hemmed the Flames in their own zone. The Flames were able to get a pretty good chance, however, when Sean Monahan got a shot off as Joe Colborne was driving the net; however, he tipped it over.

SCRUM ALERT: Karri Ramo stopped a shot by Eriah Hayes. John McCarthy stood over Ramo as he froze the puck and the whistle went, which Blair Jones didn't seem to like as he skated in and gave him a shove. It should be noted here that both Brian McGrattan and Kevin Westgarth were on the ice at this time. Fortunately, cooler heads prevailed, and the whole ordeal resulted in nothing more than a bit of pushing and shoving. Russell was also there: 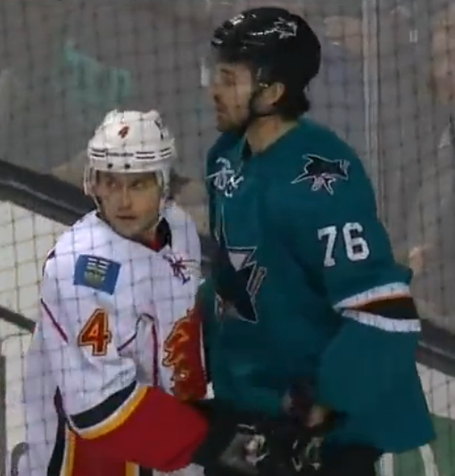 Look at him he's so tiny!! But great. Please re-sign him.

Less than a minute later, the Flames were setting up for their first goal. Giordano kept the puck in the offensive zone and passed it to Brodie, who shot it in deep. The recently re-signed Matt Stajan was there to tangle up a Shark as the puck bounced off the wall and to Jiri Hudler. Hudler, who still isn't going to Sochi for some reason, had some nice stickhandling as he took the puck to his backhand and got it past the outstretched leg of Antti Niemi to put the Flames up 1-0.

It was Hudler's 13th goal of the season, tying him for the team lead with Monahan and Mike Cammalleri. It was also his 40th point of the year. He leads the Flames in that category, but clearly isn't good enough for the Czech Republic, for some reason?

The assists went to Gio and Brodie (sorry, Matt), and it should also be noted that this was Brodie's 15th point of the season: a new career high for him.

There would soon be a flurry of goals, so here we go: Brent Burns outmuscled Brodie, who got the puck to Justin Braun at the point. Braun shot the puck, Joe Pavelski tipped it over Ramo's shoulder, and the game was tied at one.

Twenty-one seconds later, Ramo wouldn't be feeling that great as a Tommy Wingels shot bounced off Ramo's blocker and in to put the Sharks up 2-1.

But THEN, not even a minute after that, McGrattan entered the Sharks' zone and took a shot on Niemi. A massive rebound to the slot led to Westgarth beating Matt Irwin to the puck and scoring, tying the game and leading us all to wonder whether Bob Hartley is vindicated now or what (he isn't).

Yeah... sorry about that.

Bad news for the Flames to start the second period:

While the Flames' fourth line struck in the first period, the Sharks' fourth line wasn't to be outdone. For about 80 solid seconds, the Sharks' line of James Sheppard, McCarthy, and Hayes dominated play in the Flames' zone, forcing the Flames to scramble about desperately in numerous failed attempts to clear the puck. They were finally able to after Lee Stempniak shot it down the ice (the puck hitting a Shark on its way down, so icing was waved off), but it was a very frightening 80 seconds.

While the Sharks did dominate most of the game, on occasion, the Flames would be right up there with them. Giordano speeding down the wing and taking a shot on net resulted in a sharp save by Niemi after Lance Bouma tipped it, and from that point on, the Flames were able to sustain pressure and create quite a few scoring chances.

It would come to an end, however, when Stajan was called for what would be the only penalty of the game: an interference call against Hayes, necessitated when Ramo created a rebound off a Patrick Marleau shot right into the slot.

A missed offsides call would set up the Sharks for a powerplay goal. Jason "Daddy" Demers, on his knees, was able to dish the puck to a wide open Joe Thornton. Chris Butler wasn't able to stop him from passing it to a wide open Pavelski, who tipped Thornton's pass in and past Ramo on a goal the Flames' netminder couldn't have done much on to give the Sharks the 3-2 lead.

The third period began with the announcement that Paul Byron would miss the rest of the game with a lower body injury, putting the Flames down a skater and promoting Blair Jones to his spot on Monahan and Colborne's line.

The fourth line didn't miss his truculence, though. When Butler took a shot on net to start the third, Westgarth was right there to try to get the rebound. He was also there to put Hayes in a headlock, because goalscorer or no, he's still Kevin Westgarth.

The Flames spent most of the third period applying pressure, trying to even up the score. Monahan created a pretty good chance, driving the net with the puck from the side of Blair Jones and Colborne dug it out from the corner, but was unable to score. It was one of three shots on net for him on a night where he had a pretty decent showing.

Unable to even it up, Hartley would pull Ramo with a little under two minutes to go. Russell was out for pretty much the entire empty net time, so again, welcome back, Kris Russell! While the Flames didn't concede an empty net goal, they themselves were unable to score, and were ultimately defeated by the Sharks 3-2.

Let's make it so.

Russell: 23:20, the most anyone played in this game

The Flames will be back in Calgary to take on the Coyotes Wednesday night. Puck drop is at 7:30 PM MST.