The Flames didn't play all that badly. But they started the game in the most disgusting manner possible, and that's all anyone's going to focus on.

Share All sharing options for: Flames at Canucks Recap: Garbage

Forewarning: if you're pro-fighting, this isn't the recap for you.

This isn't to say I'm anti-fighting. I'm a Flames fan from 2004; Jarome Iginla introduced me to the game. I could never be anti-fighting.

This wasn't an Iginla fight though. This wasn't a fight born of naturally occurring emotions within a game. This was a mindless sideshow constructed because Brian Burke is going to concuss you by ramming truculence into your head and the Canucks have been idiots as of late, going penalty- and misconduct-heavy in their last three games, being outscored 11-1 in that stretch.

Remind me what the point of hockey is. It's to score more goals than the other team, right? That's why the Flames' starting lineup consisted of five players with a combined five goals, 13 points, and 138 penalty minutes - most of the points coming from Chris friggin' Butler? That's why Tortorella put out Canucks penalty leader Tom Sestito - who has 152 penalty minutes this year, 49 of which came in those two games against the Kings and Ducks - to start the game? To play hockey?

Two seconds into the game, and as one could have easily predicted based on the starting lineups, five fights broke out. This one is best left to the boxscore: 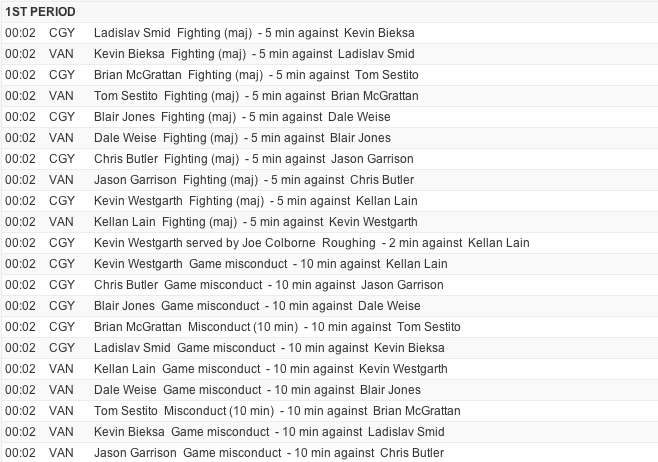 John Tortorella was the first coach to snap (and this was just the beginning of it), screaming at Hartley for starting the garbage lineup. PJ Stock would be incensed during the first intermission, demanding to know why Tortorella took Hartley's bait. It's a good point to raise, but at the same time, why would Hartley throw out such a goon lineup? What was he hoping to accomplish by sending out nothing but fighters and provoking his opponent into what amounted to nothing more than, well, complete and utter bullshit? And really, what did Tortorella think was going to happen?

The end result of that inane, pointless mess that accomplished absolutely nothing in regards to playing an actual hockey game, which I BELIEVE is the point of this league, was four players for the Flames gone, four for the Canucks (McGrattan and Sestito spared and gone for only ten, as they had the first fight), and the Canucks getting to start the game on a powerplay as Westgarth took an extra penalty for roughing.

Oh, do I get to recap actual hockey now? I should be so lucky. The Flames killed the penalty, and a little more than two minutes after that another scrum broke out. Mark Giordano and Lance Bouma took penalties for hooking and roughing, respectively, while Zack Kassian took two roughing penalties.

Again, nothing really relating to actual hockey was happening, which seems weird for a game in the National HOCKEY League.

Once those penalties had expired, TJ Brodie drew a penalty by not being a thug as Brad Richardson was called for holding. The Flames' powerplay got off to a good start, but only resulted in one shot: a great scoring chance from our hero Mikael Backlund.

Brodie continued to be our hero on defence as shortly after the powerplay expired, he jumped up into the play and had two quick scoring chances himself. Isn't it fun to watch the Flames' younger players generate scoring chances and avoid pointless garbage that contributes absolutely nothing towards playing a hockey game?

That was nice while it lasted. But again, just two minutes later, another scrum broke out. Joy! The result of that was ten minute misconducts to Shane O'Brien and Kassian, while Lee Stempniak took a penalty for roughing and Alex Burrows got four minutes for roughing and unsportsmanlike conduct.

That was, at least, the end of the garbage during the first period. There were some actual attempts to score a little after, as Stempniak got a breakaway on Roberto Luongo, who gloved it, and the period closed out with the Canucks constantly shooting the puck wide, including a chance David Booth really should've gotten in.

To recap the first: both teams had to play with four defencemen, and then the Flames went down to three when O'Brien was forced to sit for ten minutes. There were 188 penalty minutes in the first period. Because that's how you play hockey, apparently. Good show from everybody.

But wait - it got better! After the period ended, Tortorella decided to show up outside the hallway to the Flames' locker room for some reason. Flames goalie coach Clint Malarchuk looked ready to kill somebody. Burrows came by to try to help. McGrattan was acting as body guard. A slew of Flames in the back were all trying to figure out just what was going on. It looked like a brawl was going to break out right in the hallways. Video here.

Even though Torts completely snapped, he was back out on his bench early before the second period.

The second period started with everyone apparently breathing normally and ready to try to play an actual hockey game. Just 1:32 in, Ryan Kesler was called for holding on TJ Galiardi. The powerplay lasted all of five seconds. The puck got tied up in the faceoff circle, eventually going out to Giordano who buried it immediately. The Flames were finally on the only scoreboard that actually matters, taking a 1-0 lead.

The lead was short lived. A little over two minutes later, the Flames turned the puck over at centre ice. Kassian carried the puck into the Flames' zone and passed it to Kesler who was driving the net. Karri Ramo wasn't sure where the puck was going, and Kesler was able to put it in to tie the game at one.

The teams would trade chances throughout the rest of the period, making a ton of mistakes because, again, both the Flames and Canucks lost two defencemen each for no good reason at the very start of the game, resulting in everyone else having to play more than they should, resulting in exhaustion and mistakes everywhere.

But at least the two teams were playing hockey, finally-- Wait, Richardson and Matt Stajan both took roughing penalties at the very end of the period? Okay. Great. At least Torts didn't show up again.

The third period started off without Henrik Sedin, who was initially questionable to start the game, but dressed anyway to continue his iron man streak at 679 consecutive games. (Sedin wouldn't return.) It also started with a powerplay for the Flames, when a tired Wideman forced his way to the net, forcing a tired Yannick Weber to hook him in order to stop him.

While the Flames didn't get anything done on the powerplay, they would soon after. Bouma got the puck in the corner and dished it right out to the front of the net where Stajan, who had just stepped on the ice for a line change, was able to get it. Spinning around, Stajan backhanded the puck, which deflected off Chris Tanev's stick (great save Tanev!) and right top shelf into the net to give the Flames a 2-1 lead. It was Stajan's first goal since netting the OT winner in Buffalo back on Dec. 14.

Meanwhile, hey, did you know the Flames played most of the game with three defencemen? Giordano took a penalty when he tripped up Booth. The Canucks didn't score on this powerplay, but fear not: Giordano would take another penalty about five minutes later when he slashed Chris Higgins' stick out of his hands. Four seconds later, and a Weber slapshot from the point deflected off a diving Bouma's stick and into the net to tie the game at 2.

How about a fun moment to interject in all this? Bouma went to hit a Canuck and just ended up in his own bench. He stayed there, too. Probably was tired. Wonder why.

There was a little four on four action as Kassian hooked Giordano, and Gio just held onto Kassian's stick and was called for embellishing. He might've done that just to get the chance to sit for a bit, because, again, the Flames were down defencemen the entire game for no good reason. Kesler almost generated a chance, but Brodie, wonderful soul that he is, skated back and was able to cut him off and prevent Kesler from getting a shot on net.

The Canucks put a lot of pressure on the Flames' net as the third period winded down, but to no avail. And thus, this wreck of a game got an overtime period of play added to it, because nobody was exhausted before this or anything.

Overtime started off with Brodie being, well, a really good hockey player. He drove to the Canucks' net all on his own, dancing through multiple Canucks en route to getting a backhand shot attempt off. Luongo made the save, but it was a particularly impressive effort by Brodie, who had to have been gassed by this point.

The extra frame was, however, ultimately dominated by the Canucks. That is, until the period was winding down, and both teams were just screwing up, unable to get going or carry the puck or pass or do much of anything. It might've had something to do with them being tired? Again, for no good reason? The game went to a shootout.

Wideman: 38:05, the most anyone has played this season

The shootout started with a Colborne goal, snapping it just by Luongo. Burrows would try to counter, but lost the puck, stumbled, got a shot off, and was stopped by Ramo, giving the Flames a 1-0 lead in the shootout.

Jiri Hudler was the Flames' second shooter, but he was stopped by Luongo. Weber was next up for the Canucks, and while it looked like Ramo had it, as he slid back the puck slid back with him and into the net, tying the shootout at one.

Stempniak was stopped by Luongo for the Flames' third attempt. Kesler would try to win it for the Canucks, but shot it wide, sending the shootout into extra rounds.

Sean Monahan was brought in to try to recreate his shootout magic, but was stopped by Luongo. Kassian tried to win it for the Canucks but Ramo stayed with him and stretched out his leg to stop the shot with his pad.

Backlund was the Flames' next shooter, but Luongo gloved his attempt. Higgins slid the puck fivehole on Ramo, giving the Canucks the win in the fifth round.

Tune in Monday night when the Flames will be in San Jose to take on the Sharks. Puck drop will be at 8:30 PM MT. Let's try to play an actual proper hockey game this time.