The Flames scored two goals on home ice, but it wasn't enough as they fell to the Jets 5-2.

Share All sharing options for: Flames vs. Jets Recap: Burn the third jerseys

In their last six games on home ice, the Flames have scored just two goals. While wins against the Avalanche and Hurricanes were nice, they were on the road. If the Flames wanted to give their hometown fans more to cheer for, they'd have to step it up.

Brian McGrattan did his job early in the first period, getting into a fight with Anthony Peluso for no apparent reason. After spinning around a bit and trading some punches, McGrattan eventually took him down, as he is wont to do. If all he can do is fight, at least he's really, really good at it.

His fighting, unfortunately, didn't exactly inspire the Flames. Just 23 seconds later the Jets scored. Michael Frolik entered the Flames' zone, chipping the puck off the boards to himself to get by Mark Giordano. He took a shot on Reto Berra from the side, and Berra kicked the puck out right into the slot where Bryan Little was waiting for it, uncovered, for an easy goal.

Just 3:10 later, the Jets increased their lead to 2-0. With most of the Flames just kind of standing around on the ice watching the puck, Olli Jokinen passed straight to a wide open Dustin Byfuglien in the slot and he snapped it home.

Maybe it was jet lag (is that a pun? Whatever), but the Flames didn't seem all that prepared in the first period.

That trend would continue into the second. It took until former Flame Adam Pardy (remember him?) was called for an interference penalty that probably wasn't actually a penalty for the Flames to get a shot on net. The Flames seemed to be asleep on their skates.

The powerplay expired with nothing to show for it, and the Flames just couldn't get going. Four of them were converging on Blake Wheeler at once. This is not including Berra, who was almost completely out of his crease and completely focused on Wheeler, all the while Mark Scheifele was standing at the other side of the net. Wheeler slid the puck to him for an easy tap in and it was 3-0 Jets, with three very bad goals against.

As the second was nearing its end, Lance Bouma was called for tripping on Mark Stuart, though it wasn't really a trip - more like a weird, slightly late hit that sent Stuart sprawling on the ice. He was fine, though, and the Jets exacted vengeance on the powerplay. Berra gave the puck away to the Jets, and four of them passed it around without interruption before the wide open former Flame Jokinen - remember him? His hair is curling out from under his helmet now and it's creepy and weird - received the puck and shot it for an easy goal while Berra was, once again, overcommitted to the wrong side. 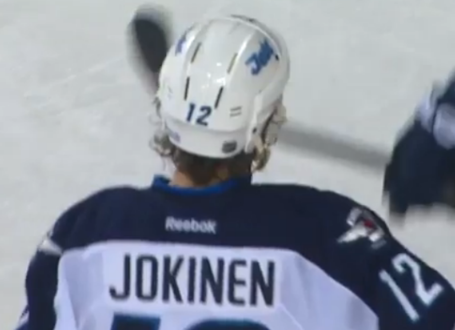 Seriously Olli, you're a 35 year old man... Please get a haircut.

The second period ended with the Jets up 4-0, and the Flames completely asleep as they only had three shots on net all period. Not exactly the best way to try to come back.

Calgary came out wide awake in the third period. Just 40 seconds in Giordano snapped a perfect shot from the top of the circle past Ondrej Pavelec. The Flames followed up that effort with a nice series of chances, even drawing a penalty as Jokinen crosschecked Joe Colborne.

The wheels fell back off, however, when the powerplay was neutralized after Dennis Wideman was called for interference on Frolik, the result of the Flames losing the zone and being unable to regain it. Four on four play led to Jacob Trouba dancing around all the Flames on the ice and going five hole on Berra for another goal he'd probably like back.

The Flames had a scattering of chances to close out the game, but the only other goal scored was the result of a Bouma faceoff win - Wideman shot from the point - Bouma redirect past Pavelec and in.

It was, however, far too little, far too late. The Flames didn't show up for the first two periods, and while they had a good third, you may be able to chalk it up to score effects. But quite simply, when a team doesn't show up for forty minutes, their chances aren't that great, and that was the Flames tonight.

The Flames will get away from home again to take on the Vancouver Canucks Saturday night on Hockey Night in Canada. Hopefully nobody will die.