Flames president and CEO Ken King held a press conference this afternoon from McMahon Stadium to update the media on the status of the Scotiabank Saddledome. The home of the Flames, Hitmen, and the National Lacross League's Calgary Roughnecks experienced significant damage on the event level as a result of the floods that have ravaged Calgary and southern Alberta over the past few days.

King says that the building is submerged in water up to the eighth row of the Saddledome (i.e. the lower bowl), and that the Flames' dressing room and the offices on the ground level are under "15 feet of water." A significant amount of hockey equipment, memorabilia, and electronic equipment (including the controls for the Enmax Energy scoreboard) has been compromised beyond repair, and the team has been forced to re-order hockey equipment in time for its development camp on July 10th.

King says that the NHL has contacted him to offer their help in the efforts to return operations at the Saddledome to normal, and although he has no idea how much it will cost to do so, he expects that insurance will cover the a good portion of the organization's expenses and that the building will be ready for the opening day of the Flames' season.

More photos and video of the Saddledome is expected to be released shortly, but for now King and City of Calgary officials are still warning people that it is not safe to approach or enter the building.

Here is a photo of the water level in the building courtesy of The Sporting News: 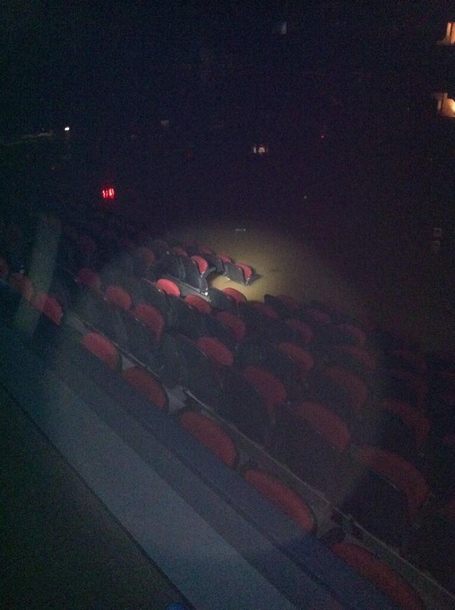 UPDATE: Here are more photos from inside the Saddledome via the Flames' official website.

King says there is currently no contingency plan in place if the building is not ready by the time the Flames open training camp in mid-September, but added that the NHL has been extremely flexible in the past in accommodating schedule changes for teams affected by disasters, citing the Boson bombings and floods in Nashville as examples.

Stay tuned to M&G for further updates and stay safe, everyone!