Why the Success of Flames Prospect John Gaudreau Matters

Share All sharing options for: Why the Success of Flames Prospect John Gaudreau Matters 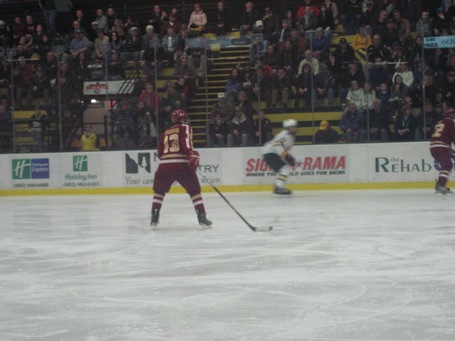 Generally speaking, when a prospect from beyond the first round succeeds or fails, it's hardly something to get worked up about. The successes tend to be 4th line types and the failures tend to be players the fans hardly knew.

Just about every hockey fan should be familiar with Martin St. Louis- the undersized forward who went undrafted despite four exceptional years with the University of Vermont Catamounts (three of which resulted in Hobey Baker nominations) and went on to win an Art Ross, Lester B. Pearson, Hart, Stanley Cup, and the all important Bud Light Plus/Minus Award.

St. Louis' career after that gets pretty famous- in his second season with the Lightning he had 35 points in 53 games. In his third he had 70 in 82. His fourth saw him reach 94 points with 38 goals and 56 assists. He capped his season with a Stanley Cup win over the, you guessed it, Calgary Flames. He had 24 points in 23 playoff games- including a 2OT goal against the Flames in Game 6. Marty St. Louis was haunting Calgary.

A skill player of his caliber hasn't appeared in Calgary since the team cut him. Jarome Iginla is the only player of any type to be his greater than or his equal to dress in the Flaming C, and the Flames fortunes have been on decline ever since.

Sure, his 20-21-41 in 42 games isn't quite at the level of St. Louis' freshman 15-36-51, and sure, even St. Louis has a couple of inches and 20 pounds or so on Mr. Gaudreau, but the point isn't to expect Gaudreau to be the next Martin St. Louis. It's to give him time to develop and give an undersized player a real significant chance to compete in the NHL.

The point is, the Calgary Flames have a chance to develop a high skill forward- one who would've likely been a 1st round draft pick were he a few inches taller- at little cost to the organization. Giving Gaudreau a chance to succeed at the NHL level matters: it matters because Gaudreau is exactly the sort of player the Flames find themselves consistently lacking; it matters because it truly signifies the end of the Craig Button and Darryl Sutter eras; it matters because Calgary fans will be able to look back and no longer hang their heads in shame at the memory of Martin St. Louis being shown the door.

Be sure to catch John Gaudreau, fellow Flames prospect Bill Arnold, and the rest of the BC Eagles in the Frozen Four on Thursday, April 5th at 8PM EST on ESPN2 in America and whatever channel shows it in Canada (if any).