Share All sharing options for: Cognitive Dissonance or: The All-Too Familiar Flames 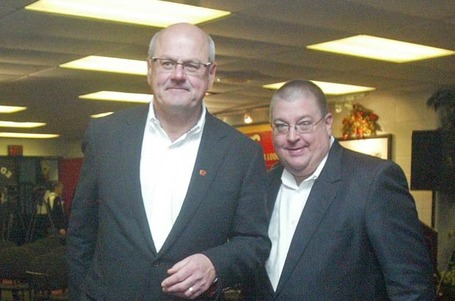 My favorite write-up from last off-season was one by Danny Gray at Leafs Nation entitled, Better Know a Bias: Cognitive Dissonance. It's a great piece defending advanced statistics and their integration into main stream hockey analysis.

If you have the time, read the excellent article. If not, I'll quote the appropriate passages as a means to prove my point in regards to the Flames franchise and fan base. A point that I've attempted to beat into everyone's thoughts with intrepid, repetitive fury.

While reading, the only thought that came to mind is how this concept can be applied to Calgary Flames hockey operations and many of us who contribute so much of our lives in support of the organization.

... Cognitive Dissonance, a theory developed by Leon Festringer. It states that when a person holds two conflicting thoughts, or cognitions, that are incompatible or inconsistent, feelings of discomfort, or dissonance, are produced. Essentially, we do not like to hear or think things contrary to established beliefs, attitudes, or knowledge. When something we see or read conflicts with a firmly held belief it makes us uncomfortable. People attempt to silence the discomfort created by the dissonance in different ways depending on the magnitude of the established belief being challenged. Generally, we attempt to seek information that will decrease the dissonance as well as avoid information that would increase it.

After the jump, I'll use this theory to discuss the Calgary Flames season behind us, team management, the future and why I have little to no faith in those making the hockey decisions.

In my season preview written as part of the Flames Nation contributor search last summer, I listed many reasons that expecting more out of the team this year was not a reasonable conclusion, and predicted a similar outcome to the previous two seasons,

Taking all of these factors into consideration, how can we reasonably expect any significant improvement from the Flames? We never even talked about how several of the Western Conference playoff competition crazily went out and improved their team during the off-season. I won’t say the playoffs are out of the question and I won’t ever rule out bounce-back seasons – but, exactly how much is there to bounce back from? And, who will provide the bounce?

Despite this, and many other predictions of the same (albeit not by so-called experts) Jay Feaster boldly (or idiotically) went in front of the media and guaranteed the Calgary Flames would make the playoffs.

There was no proof or evidence whatsoever that would lead us to believe this team would improve upon their finish last season other than the magical "run" that was nothing more than a team capitalizing on a favorable schedule and some sort of adrenaline rush caused by the firing of their seemingly incompetent General Manager. These points were proven time and again in the saddlesphere (and, completely ignored by the main stream media). To suggest this team was capable of more was to ignore the truths that stood up and slapped us all in the face. To ignore these blatant truths was to be a fan.

This kind of cognitive dissonance is only natural for fanatics of a team. I mean, ask many Oilers/Flames fans at the beginning of each year what the season will hold and the answer is the generally the same regardless of the teams current situation which often says something much different.

We've all been guilty of it a time or two and we can laugh about it at the end of the year.

What I can't laugh about is ownership and hockey operations falling victim to this very theory.

One of the gravest mistakes team management can make is failure to properly evaluate the makeup and direction of your organization. Flames HOPS have done this for half a decade now, yet we still give them the benefit of the doubt. They're supposed to be smarter than the average crazed fan, not guilty of the same jaded views.

Brian Burke made the same terrible mistake when he started with the Leafs, trading two 1st-round picks (Tyler Seguin and Dougie Hamilton) for Phil Kessel because he felt his team was already a playoff team and needed the push over the top. He completely ignored their actual standing and the team has suffered mightily because of it.

Kevin Lowe did the same thing in Edmonton for years and who knows if they even would've succumbed to the re-build had it not been forced upon them by circumstances partially beyond their control.

Feel free to believe that Jay Feaster is the right man for the job in Calgary. Hey, he was hand-delivered a Stanley Cup winning team won a cup in Tampa Bay, right? Oh, and now word is getting out that he's always wanted to blow up the current team. Then why in the wide world of sports didn't he? There are only two reasonable possibilities, either he has no power to make those decisions, or, he was lying. Both are equally upsetting and equally believable.

Last night I caught the tail end of a segment on That's Hockey where Pierre LeBrun suggested he had a source that said Calgary Flames management does not believe this team requires an Edmonton-style re-build and that they favour a re-tool.

I was excited for a moment thinking that maybe they were finally willing to admit that the team needed some serious changes, only to think on it further and remember that direction would've worked following the teams 11-point NW division collapse and 1st-round playoff exit in 08-09 and not three years later after they already traded several very good assets for pennies on the dollar, leaving them with hardly anything to use to re-tool.

Before our pants get too tight about the prospect of a change in direction from Flames management let's wait until they're willing to admit that maybe, just maybe, there exists the slightest of possibilities that, when looked over with a fine-tooth comb and the strongest of the strong magnifying glasses, they have misjudged the team for several consecutive seasons.

If, and this is a huge IF, they are able to muster that courage; then, and only then will I begin to believe in the future of the franchise.