The Oncoming Olli Jokinen Perfect Storm - Overpayment on the Horizon

Share All sharing options for: The Oncoming Olli Jokinen Perfect Storm - Overpayment on the Horizon

I live in Tornado Alley. Tornados here in Texas are not like in Canada where their very happenstance is historical, where a single tornado is remembered for years after like the one that hit that Edmonton in 1987, it even has its own wiki site.

Tornados are expected, just like the leaves turning orange in the Fall. Every year they are devastating.

The first time you see a dark cloud swell coming across the prairie in Texas is terrifying. The entire horizon from left to right for as far as you can see is dark, as the clouds float ominously toward you. It is what the aftershock of a nuclear bomb headed toward you would look like from the ground.

The contrast of standing in perfect sunny weather with a clear blue sky above you makes the coming black onslaught all the more horrifying.

It is the slow inevitable march of it.

Old air raid sirens, remnants of the Cold War, start to sound in your neighborhood, if you are watching T.V. the emergency broad cast signal rings constantly over the audio of whatever you are watching and a ticker at the bottom of the screen flashes red with information to take cover.

Olli Jokinen is coming and he wants a new contract. 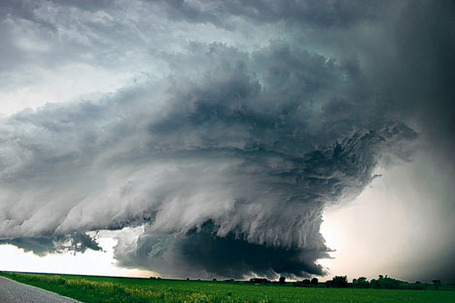 This force of nature is beyond anything you have likely seen in your life, no matter how many times you watch Helen Hunt in Twister you really can't appreciate it, until you experience it. The cow flying through the air is funny until you realize it isn't an exaggeration. Never mind cows, cars are thrown hundreds of meters and it is no imaginative scenario for dramatic effect, just another tornado season.

The rain stops falling vertically, it starts to hit you directly in the side of the face, like someone spraying you with a powerful hose from the side. I walked out of my house, just outside the doorway, foolishly to see if the horizon had cleared in the distance.

I made it less then 5 feet when the force of the wind knocked me over. A wind strong enough to effortlessly knock you right off your feet is something most Canadian's can't imagine. It is about 200 mph or 330 km/hr in a mid-category tornado.

Some wonder how a bible belt can persist in a modern country in the 21st century, how such religious fanaticism can fester deep in the American South, part of the reason is that moments like this happen every year. It is a 'Pray to Jesus' moment where you know your very life is in the hands of pure fate.

Water falls from your roof in a pure waterfall and the booms of thunder rattle your ear drums while instantaneous blinding flashes of lightening surround you in the sudden darkness, in the middle of the afternoon.

Then suddenly and without warning it passes, the sky clears within minutes and a half hour later you can not believe what just happened. The sun seems more beautiful, the sky more awesome and you are simply glad to be alive but then you look to the ground and you assess the true havoc. The damage wrought and the long term consequences.

Olli Jokinen is on the horizon and he is coming for a new contract and woe to the Flames, as they are as vulnerable as the people who live in the perfect storm conditions of tornado alley.

As most folks around here know, I have been a long time defender of Olli, long before it was acceptable to do so. Even during the time when Olli was everyone's favorite whipping boy.

BUT even I did not endorse Olli Jokinen at his previous contract of 5.25 million.

Age: The man is turning 34 next season. As great a season as he has had, this is a dangerous age for a forward. A long term contract could be devastating if over priced and he certainly will be losing that step in coming years.

NOT a 1st line Centre: Part of the problem Olli has had in reputation is the temptation of so many to see him for more than what he is. Olli is a very good 2nd line Centre, he should always be seen through this sphere of reference. Great danger rests in seeing him as a #1 Centre and paying him as such. He isn't even really one right now. Olli's presence on the Flames and his current role as #1 C is more about the team's dismal state at this position than his skill.

Matt Stajan: Probably the worst contract on the Flames and the worst part about him is that he sets a standard. A bar if you will and it is terribly high. As a comparable Olli and his agent can easily point to Stajan and demand a significantly higher contract. The Flames can not match it, they simply can't.

Not Elite: Over and over this must be kept in the forefront of the Flames' mind. Olli is a good player, a desirable player to resign and could be a important part of the team going forward but only at the right price.

Sturdy: He has had a career of relatively low injury frequency. How important this is, should be heightened to the Flames after a season like this one.

Consistent: 9 straight seasons of 50 points or better? That is consistent point production and even in a radically altered role.

Evolution: Olli has altered his game which is admirable, he has become a two-way Centre BUT don't get too heady on this. He is not an elite or great two-way Centre, he is a serviceable one.

Work Ethic: One of my favorite parts of Olli is that even when he screws up, game after game you see him working hard. I'll take that 7 days a week and twice on Sunday to a franchise god who shows up for half the games in a season and is paid twice as much, ooops, did I say that out loud.

Professional: Olli's approach to the game is not puppies and puck bunnies. He takes his game seriously and he does everything he can to be better from eating a Big Mac to consulting with a psychologist.

Leadership: Dare we whisper the "that which must not be said" about Iginla. He may leave of his own desire and seriously if you have been watching him closely this year and you understand the state of the team and are realistic, it can not surprise you. In that case Olli is a candidate to be Captain along with Gio. The list isn't too long. If Olli resigns it will be his 5th season next year with the Flames and he is well within the realm of being considered for Captain.

GlenX Chemistry: As Iggy has been the vinegar to Olli's oil, GlenX has been fire. Iginla has constantly been a weak pairing for Olli, his tendency to insist on playing his game over the game the coach wants has stifled the two since inception. GlenX in contrast is on the same page as Olli, as is David Moss. Resigning David Moss puts a little wind in the movement to resign Olli.

The OMG line with its workmanship and following of instructions may be preferable to the Flames over Iggy's Beer League team, having fun with the puck via the MIA line of Mike - Iggy - Alex.

The dangerous combination of the sparse UFA market, the Flames woes at Centre and a team in transition plus Olli's strong season and high payments to comparable players make for a high risk perfect storm this off-season.

The only card the Flames may be able to play that Olli may highly value is the NMC. The Flames need a hometown discount from him, a significant one. The NMC is absolute and the value of getting one has to be at least a million in lowered Cap hit.

The Flames can NOT overpay for Jokinen. They have to hold fast in negotiations. Although he is important and highly desirable to resign it is not the end of the world if he does not.

The Flames can gamble on the growth of Mikael Backlund, they can elevate Mike Cammalleri to the top line C, I think that would be a disaster but they could try it. Cammy as the 6 million dollar man is already a proven frail player. Blair Jones is another C who could fill the third line role and perhaps even the 2nd line role if Backlund also continues to be as frail as an elderly woman with osteoporosis failing down the stairs daily.

The Flames have options, they have other routes they can take AND given the state of the team at this stage they do NOT have to resign Olli. The sun will come up after this July 1 deadline and it will be preferable to signing him and the long term burden the team may have with him in the future.

Olli will likely go to market this year and bring back big fat offers from other teams and plop them down on the table. Big overpayments, stuff that will make Hemsky and Grabovski look like bargains.

The Flames have to hold fast. They have to keep their eye to the future. It is after the Tornado hits and the years of work afterward to fix the mess they have to think about.

Stajan looms large at the moment with his huge immovable contract, vastly overpaid for performance and well, since we are stuck with him, he is another reason why the Flames do not have to give in to absurd contract demands.

Cammy, Backlund, Jones, Stajan can all fight it out. Less than ideal choices for Centre they may be, but the Flames are better off with them on good prices than over paying long term for Olli Jokinen.