Why the Flames Can Not Do a Nuclear Rebuild

Share All sharing options for: Why the Flames Can Not Do a Nuclear Rebuild

If there is one thing I have read a zillion times since the Flames missed the playoffs in 2010, it is that the Flames need to do a scorched earth rebuild. This comment is made so constantly and so non-stop now that it is like white noise in the background. The volume just goes up and down on it. Up after a loss, down after a win but it never goes away.

Part of the problem is the fact that our closest NHL neighbor to the North, the Edmonton Oilers, have embarked on this path. The proximity of the NHL's biggest Hiroshima level rebuild being so close to Calgary sends the dust cloud all the way down south and covers a non-playoff Flames team with radioactive rebuild particles constantly.

Oiler fans constantly pepper the Flames with this comment and have for years. Part of it may be a desire to hear a "Yes, Virginia we should do a rebuild like you" but what I usually respond with is "Why? Do you need validation from a Flames fan that you are on the right path?"

Seems a little suspicious to me that fans of the Flames greatest rival would be offering well-intentioned advice.

But the Oilers and their supporters are certainly not the only ones who advocate a big rebuild for the Flames. Many can read the tea leaves on the Flames future. It is pretty obvious. The team needs to start looking past Jarome Iginla and Miikka Kiprusoff at this point, all you need to do is look up their ages.

First and foremost how is the stability of the Calgary market? Some markets are rocks and others are soft.

Some markets like Toronto and Edmonton will continue to sell-out with a terrible team. These markets are rocks.

People who live there have no issues putting out thousands of dollars for season tickets to watch a basement team with no chance of the playoffs for years. They may not be happy but they keep spending their money. These markets can weather a long total rebuild.

Other markets like Calgary and Vancouver, no chance. The Canucks are loving life now but 10 years ago they were not selling out despite being over twice the metro population of Calgary. The Vancouver market like Calgary is a soft market.

People will go watch a competitive team but they will not spend their time on a basement team. They will just go do something else with their entertainment dollars and time.

It is easy to take on a nuclear level rebuild when you know you are still going to sell-out that last place team. It is far harder for owners to green light that total rebuild that will result in a basement team when they know they are going to be hit with losses of maybe tens of millions a year and see the stands empty out.

As some may or may not know, Calgary has already tried a full scale rebuild. The even packaged it up and marketed it in a similar way as the Oilers.

As the Oilers have "Oil Change" today, the Flames had the infamous "Young Guns" of the late 90s early 00s. 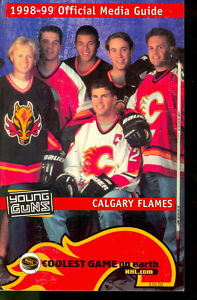 Oh the era of the horsehead jersey of flaming snot.

The constant empty propaganda season after season of "We're young and getting better." While year after year, with the exception of a few players like Jarome, you had to witness awful hockey.

The Flames even went out and got a 37 year old Grant Fuhr of former Oiler glory and you really knew it was a terrible time. Like rubbing the fan's nose in it, we had to watch Fuhr in a Flames jersey win only 5 games and lose 13. Dark, dark times. 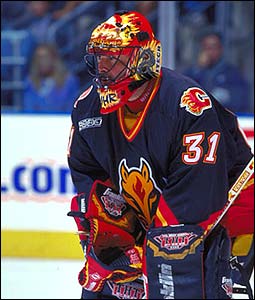 The Dome Emptied Out

Darryl Katz probably wishes he could nuke Rexall out of existence like the former Oiler team itself. He wants that new arena with all the lust of a teen boy at a nudist camp and the man's eyes roll dollar signs like a slot machine at the prospect of future sell-outs when it is completed.

Ahhhh the joy of a rock market that will pay and pay no matter what the product does on the ice.

Calgary is not this type of market. Luxury boxes will not continue to sell if the Flames are not winning. It may take a bit of time and they may even be paid for but sit empty for awhile. Seats in the stands may be paid for and sit empty, for awhile but eventually they will be empty and NOT paid for.

Calgarians can do a lot of other things in Winter.

The mountains and Banff are a brief hour drive away with world class skiing on the door step. The Olympic Oval is there if you want to try out some of the fastest ice in the world. Spruce Meadows has a little show jumping horse tournament in September. Countless pubs and restaurants beckon. Little shopping at Chinook Center perhaps? A movie maybe? How about a nice afternoon in TD Gardens, always pleasant in the dead of winter when it is so cold outside or maybe a little cross-country skiing in Fish Creek Park. Little trip up the Calgary Tower maybe for a nice dinner or a winter walk in Princess Island Park?

Who wants to jam onto the C-train of sardines to go see a hockey game, the Flames are going to lose anyway.

Oh yes, that will happen and then the kick hits where it hurts most, in the wallet.

Now the Flames have a solid ownership group financially.

Murray Edwards is a billionaire and he isn't the sole owner, there has always been a collective of well moneyed men. They took hard losses for a long period of time but certainly the hard core Flames fans who stuck with the team during the dark era are grateful they too stuck with the team.

You still have to be rational about these guys. They were probably as shocked as the rest of us long term Flames fans at the emergence of the Red Mile in 2004 and they can not want to lose that support in the city and the formula really isn't that complicated. The team has to be good, at least good enough to make the playoffs.

Now they obviously made mistakes, like many of us by thinking Darryl Sutter was a hockey genius and not a unqualified GM who got lucky but oh well, lets move on.

One can not expect the Flames owners to burn the team to the ground you have to see their perspective and the fact that it will cost them big money and is no guarantee to even succeed. They know this from the previous experience of their own failed rebuild of the Young Gun era.

If there is one thing the Flames owners are probably very aware of and even too enraptured with due to their experience is the commitment to "Hero" players. The value of the star players.

The player faces of the franchise. They know as well as the rest of us know that a young Jarome is what kept the few butts in the stands during the dark era. The Flames owners know the power of star players to the masses of Flames fans. I am willing to bet pretty safely that there has been more Iginla jerseys sold in the last 10 years than all others combined.

They know Kipper birthed a whole new generation of Flames fans and as much as cold hockey analysts will be calculating out potential trades on him next season, now that his NMC has expired, the truth is there is a very good chance the Owners would block it because they know all over Calgary are little versions of Kipper Kids who will be devastated.

Even if a total mountain of a winning trade for Calgary is on the table next season for Kipper they just may pause. Fan backlash is also something they are very aware of. It happened with Fleury, it happened with Joe Nieuwendyk, it happened with Al MacInnis. Flames fans always blame the GM and the owners when the stars leave. Even if it may be at the player's inclination.

Something again you see a little evidence of with the Flames owners clearance over and over of NTC and NMCs.

They want to treat their players well, give them security and have them happy. The Flames don't want players to ever request a trade or want to leave Calgary. They have long memories. (Note: That may not be the only reason for the plethora of NTC / NMCs on the Flames but it is a part of it I am sure, recalling all too well the outrage in the fan base as the Cup team was dismantled.)

The reason I am writing this article now is because I hope it will be useful for some readers in their internet travels to link in response to the countless reflexive and simplistic comments on the Flames needing to do a full nuclear rebuild Oilers style.

I hope it helps enlighten them why such a path is not embraced by the Flames ownership given their market and their previous experience in a failed rebuild in the late 90s and 00s.

In cold hockey analysis it may be a fair argument, it may even be the correct one strictly from a hockey operations perspective and it sure is easy to advocate when it isn't millions of lost dollars out of your pocket.

The Flames will likely continue on with their slow injection of youth. In all fairness given the moves made last off-season and moving out two former core Darryl Sutter players in Robyn Regehr and Daymond Langkow one can argue that the soft stealthy rebuild has already started but it is doubtful you will ever see the Flames go for a dramatic and total one-season house cleaning.

The only way Jarome will be traded is if he requests to be traded. No matter how it comes out in the press, it is without a doubt that he alone is in full control of his future. The question for him is really whether he wants to finish his career in Calgary or do what Ray Bourque did and clear a trade to go win a Cup.

On Kipper again, so many trade possibilities but I am not sure the Flames ownership will clear trading a player who is so worshipped in the fan base.

The Flames have Sven as a potential star of the future and they will go to market and spend again to try and get another. Always they will try to put the best winning product they can on the ice and they will be looking for that post-Iggy Hero for Flames fans, they know it is critical. They know what will happen if they don't in Calgary.

So Flames fans, tighten up your support, I wish I could get that experience of 7 years of awful hockey into your consciousness but really I am fine with this long slow road. Hockey late in the season that matters, that comes down to the last ten games of the season is worth it.

It is better than pouring over draft picks in January and then having all that hope and optimism only to watch those high picks bust out via Rico Fata or Brent Krahn style years later.

It is best to just embrace the slow rebuild, painful as it may be. No point trying to bang your head against the wall of advocating a total rebuild in Calgary, you don't own the team and it isn't millions of your dollars at risk if Calgarians stop going to games.