As per the St. Cloud Times, David Eddy of SCSU is on his way to the major league with a pending contract signing with the Calgary Flames looming.

This hasn't been confirmed by the Flames organization as of yet, but I'd assume some sort of announcement will be put out today.

We knew already that Jay Feaster planned to chase NCAA free agents as a way to speed up the re-stocking of the Calgary Flames semi-barren prospect cupboard, but I think it was safe to say that was met with a tad bit of skepticism as the Flames are not known as a team that snags NCAA talent as UFAs. And, Calgary isn't exactly like Toronto who went on an American College spending spree a couple seasons back; the Flames don't have the US Olympic tandem of Brian Burke and Ron Wilson to go attract the big names.

What they DO have is an organizational depth chart with many holes, not just deeper into the system but also up top where this off-season could be ripe for major change with as many as 10 pending free agents. That gives Jay Feaster a little bit of leverage when seeking these players that aren't like your typical draft-age prospect; these guys are pro-ready and can make an impact at the AHL level at the very least - allowing Feaster to offer the allure of opportunity, hopefully with no guarantees. 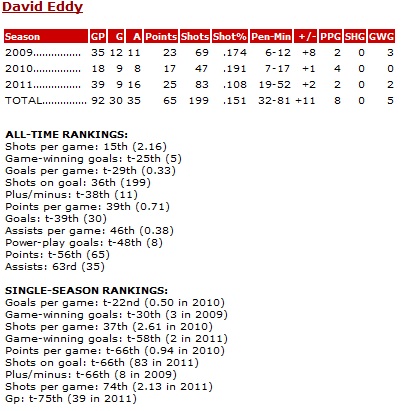