How the Flames make the Playoffs - no really

Share All sharing options for: How the Flames make the Playoffs - no really

This season, much like last season has the Flames neck in neck in the playoff hunt.

Last season came down to a 3 game California road trip from March 20th to March 23rd. In those three games the season was decided. The Flames only got two points out of a possible six and the corner was turned. If the Flames had won those games they would have finished with 98 points and made the playoffs.

This season is not quite the same as last season and the difference is in the schedule.

The Flames have the best schedule and their closest competitors have tougher ones ahead of them. The Flames enemy has revealed themselves at this point and that team is without a doubt the Phoenix Coyotes.

The Flames have a better chance this year of making the playoffs than last year.

This back of a napkin illustration has the remaining games for teams in the Western Playoff Race.

Highlighted in Green is teams that should bank wins for the team in question. These teams are either out of the playoffs or simply weaker, shouldn't be too controversial.

Then in Red teams that should beat the teams pushing for the playoffs. No one will be surprised if it happens.

All internal playoff race combinations. The "4 point games" are left open as 50/50 games and both teams are given a point as a sort of wash.

The Sharks I pick to be in it and it is a team you can easily see going on a tear.

I pick the Kings to fall out of it.

The Stars should make it.

The Avs will be talking draft picks within two weeks.

That leaves the two teams that are in my view a true coin toss and I give the Flames the edge.

Honestly I like the Flames odds going into the home stretch here and this assumes two end of the season losses to the Canucks. The key to this Back of the Napkin approach is how one anticipates other teams to fair and I like the role the Sharks will play in games against both the Coyotes and Kings. 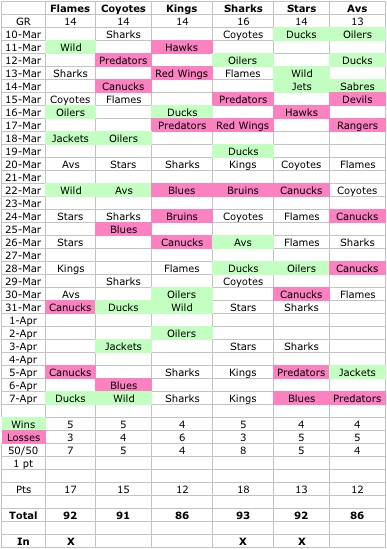 Note: I originally did the sheet with the Mar 13th Sharks / Flames game as a Green win for the Sharks and Red loss for the Flames. The numbers add up as such and I don't want to redo the sheet, so keep that in mind, it is all a estimate anyway.