Against all odds, rational computations and plain common sense the Flames continue to burn brighter.

A Flames team made up of AHLers, a red hot Miikka Kiprusoff, about 6 strong NHL players and the remaining workman like players have put up another big win.

The game was the usual Sutter vs Sutter battle of boring D first hockey.

Not a whole lot to write about in this one. When the Sutters played hockey back on the farm, the saying was not "next goal wins" it was "first goal wins" and tonight the Flames got the first goal from Mike Cammalleri and Kipper stood tall to take the shut-out and the ever so important regulation win.

At the end of the day the Flames are in a playoff spot for the first time this year. The Flames are singing away to their fans, "Against All Odds". All fans, not just the advanced stat crowd, know how weak this team is, but on the other hand, how can you not start to get drawn into this playoff race, not start to cheer for that empty space on the Red Mile to get filled up again.

Phil Collins -.Against All Odds Music Video (via nik0la007)

In a attempt to create some sort ontological meaning onto what is happening with the Flames lets speculate.

Speculate in the positive sense, which we rarely do. Lets try and come up with some reasons why the Flames sit where they do in the playoff race, which they really have no buisness occupying. Speculate why they are winning and holding up.

In the last 8 games the Flames have gotten 13 of a possible 16 points. A heady point production of 0.8125%. That can't possibly last, but in the meantime lets try and speculate why.

Remember the over and over trumpeted point for the last several years that the Flames have nothing on the farm, nothing for depth? Is it possible at this point to cautiously put forward the premise that this may have been a bit overblown. TJ Brodie and Leland Irving have not "sucked" Roman Horak has logged 46 games and while he is not running over the competition is it fair or should we even expect the 20 year old Czech to do that in his rookie season? He is a 5th round pick, it is amazing he is even playing that many games in his rookie season and not getting beat like egg whites on cake day.

This in and of itself may not result in them scoring but it results in solid performance when they are clearly out matched in their line match ups, they are not responsible for goals. They can stop the other team's line, they may not be able to beat them for scoring or hold possession but they can hold the opposition back and play low error hockey.

Then Blair Jones and Mikael Backlund went down in two games, one after another and I was personally going through the various seller options for the Flames at the deadline right there, but somehow they continued to win.

Against all odds the team has burned brighter and when you have this Kipper guy, well you don't make excuses, its the Calgary Flames, they always go for the playoffs even when the whole NHL laughs at them. Head north up the QE2 highway if you want to watch a team that doesn't bother going for the playoffs anymore.

There are no excuses for not making them. That is the goal. Once you get a dance ticket, you play for the Cup, that is the entire point. 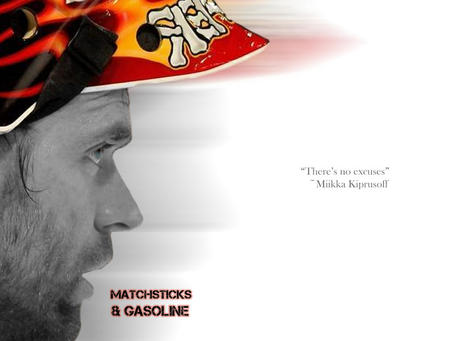