Share All sharing options for: Huge Win Over Team USA Leads to Canada-Russia Group B Showdown

Heading into the round-robin portion of the tournament it seemed the biggest wildcard was in goal for the Canadians. Malcolm Subban had done anything but inspire confidence in fans of the team and most were worried, at best.

His performance in this last night's this morning's 2-1 win against the Americans has silenced critics, for today at least.

36 saves, including an empty-net 6-on-4 penalty kill to finish the game, and Subban is the man of the hour for Team Canada and will look to ride that confidence into their game against the strong home squad, Team Russia.

No surprise the offensive leaders for Canada. Ryan Nugent-Hopkins has been as steady as they come so far in the tournament and notched his 3rd goal, to go with 5 assists, and his tournament-leading 8 points, and opened up a 1-0 lead for Canada with assists to his linemates Jonathan Huberdeau and Mark Scheifele.

Jacob Trouba scored for Team USA in the third period for the final goal of the game in Canada's 2-1 win.

Of note for Flames fans, John Gaudreau had a great opportunity to get the Americans on the board but was stopped easily by Subban on a breakaway chance midway through the first. 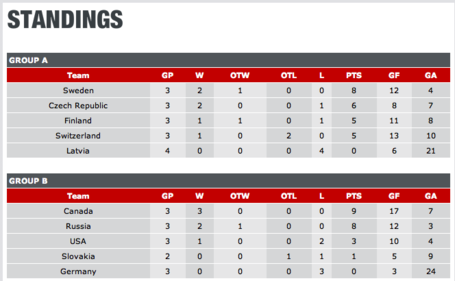 According to the tie-break rules, following total points, the first tie-break is head-to-head results. Meaning, the winner of this Canada-Russia game will be the group B champ and will earn a bye into the semi-finals.

There are two big storylines for Canada heading into the big game;

1) The return of Boone Jenner who was suspended 3 games for a devastating pre-tournament hit against Team Sweden and J.C. Lipon who's back after serving a 1-game suspension for his high-hit in Canada's last game against Slovakia. This should provide a big boost for the club, mostly for the return of Jenner who will likely slot right back into his 3rd line centre spot and provide a big, physical presence.

2) Canada plays its only back-to-back of the round-robin and it just happens to come against their strongest competition. Russia already played their back-to-back game against the oft-relegated Team Germany. Despite the short rest, don't expect this to have much of an impact on the team at all, especially with two forwards returning to the lineup.

The puck will drop shortly after 7am MTN (despite every TSN promo you'll see saying 6:30am, that's just the pre-game show, so don't get up too early if you don't want to!).