Anatomy of a Goal: John Tavares

Share All sharing options for: Anatomy of a Goal: John Tavares

John Tavares scored a whale of a goal against the Flames at the end of December. How did it happen? 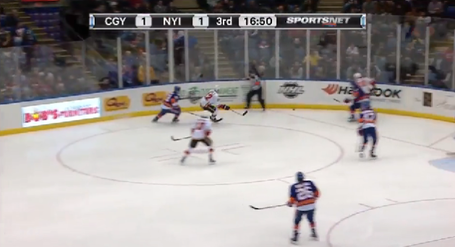 Here we have Jarome Iginla cycling the puck on the half-wall. The pass goes to corner where Curtis Glencross is standing, with Iginla streaking to the net. But, instead of passing the puck back to Iginla, Glencross attempts to continue the cycle by dishing to Jokinen, who is behind the faceoff dot. 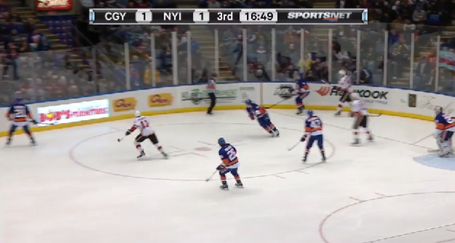 Both Glencross and Iginla are now at the goal line, which means Jokinen-if he can even make it to the puck in time-will need to ward off 4 Islander players to continue the cycle. It's a huge mistake from Glencross and not enough communication from Iginla and Jokinen. Kyle Okposo gains control of the Glencross' pass on the boards and moves it to Tavares. 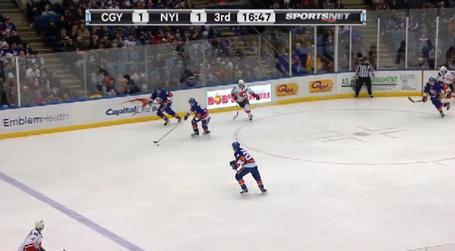 It's now a 3-on-2, which is obviously a very bad thing. We can write off Iginla and Glencross, because they're in way too deep. 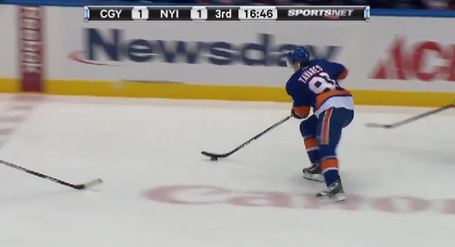 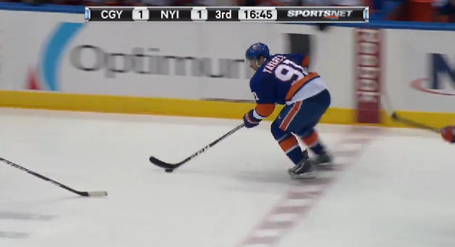 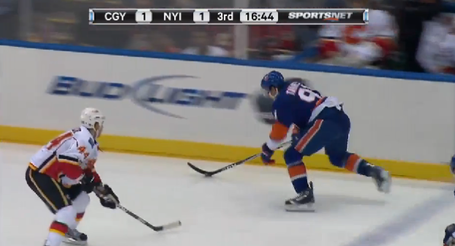 In the next two seconds, Chris Butler sees his cushion go from 20 feet to nothing. With that kind of speed, Butler needs to recognize that he's losing ground and should be mid-way through his pivot. At this point, there's no way Butler's going to be able to contain Tavares, thus Butler needs to cut the outside wall off and hope he slows down Tavares enough for Jokinen to be able to get back and help with him. There is no point in pivoting now, so all he can-or, rather should-do is skate to the glass with his stick remaining active. 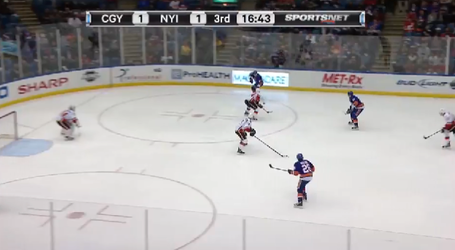 Except Butler doesn't do that. Instead, he attempts to contain the 3-on-1. Notice Butler still hasn't pivoted, even though Tavares is now past him. There's no reason here for Butler to attempt to contain the 3-on-1 because Tavares has a clear shot to the net. Jay Bouwmeester recognizes this and is in good position. 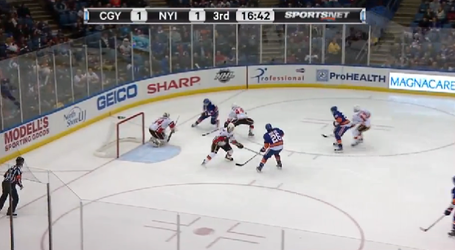 Butler still hasn't completed his pivot. There is literally no reason here for Butler to not have tried to take his man out with a trip or something. Kiprusoff probably goes down too quickly here as well. 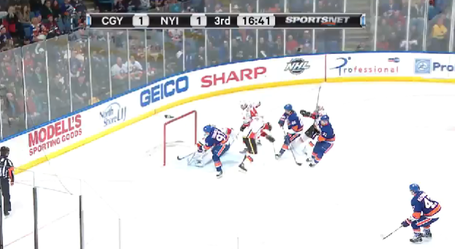 And, of course, the aftermath. Bouwmeester probably could've broken off of his man and taken Tavares quicker, but other then that he played it pretty well. Butler is lost here, and Kiprusoff isn't able to stretch as much as it takes to save the goal. Not sure what Jokinen's doing with his stick, but that's irrelevant at this point.

All in all, just a poor overall effort from the entire Flames team on that one.