Editor: Our first audition piece is here- remember you can submit your own via email anytime in the next week and a half! This piece comes from "Writer 1", whose secret identity will be revealed eventually.

With Ken King and Jay Feaster meeting with season ticket holders last week, many questions were answered from fans (or as Darryl referred to us, farmhands).  Whether it was the Brad Richards talks, Regehr trade, or the training regimen that the Flames are instituting for their secondary and tertiary players, a lot of topics were covered.  After playing a Spy in Team Fortress 2 for 6.5 hours one day, I figured I’d dig a bit more myself to find out what wasn’t said.

Brad Richards was close to signing with the Flames, and for more money than what was reported.  When asked about how much exactly, Jay turned to the assistant to the Assistant GM, Ed Belfour, who responded with "A billion dollars".

Talks supposedly went long into the night, and there was progression, but talks hit a standstill after Brad pocket dialed Ken King while performing "New York, New York" at karaoke on the Friday night.

Pardy was offered 2 years, but after hearing about how much Dallas offered, Jay laughed and went home and watched Bambi while counting up to 2 million.

When the Regehr trade was brought up by a fan, Chris Breen stood, checked the fan, and said that the name has no meaning anymore. Summarizing… "We’ve Breen Told"

There were hints about how there may have been problems in the dressing room pre-Christmas, thus underachieving. While I sleuthed around the ‘Dome I noticed a lot of holes in the GM office walls.  Also, taking a look at the music selection in the dressing room, pretty terrible stuff: Enya, Relaxation Music for 2010, and curiously, "Darryl’s Swan Song" was on repeat.

Hagman was shown what he was worth in trade proposals from our GM in the exit meetings.  The names I saw were mostly minor leaguers, but the one name that I did recognize was Daniel Ryder from a team in the CPHL…

Players have been given the top numbers for physicals. There’s a new rating system as well, and reads as such: "Eriksson-esque", "Poor", "Needs Improvement", "Passable", "Rookie Iginla", "Gelinas", "Iginla (God-mode)".

Bouwmeester has been teamed up with Hartsburg to try and rectify his offensive game. After watching some video from the past 2 seasons, Craig came to the summary of "Everything opposite of what we just saw."

After signing Pierre L-3, Iginla has relaxed on punishing the heavy bag with Jamie Benn on it. Jamie has since been released and allowed to relax for the upcoming season.

Miikka has been working hard as well and his focus?  Style directions in magical beard growing.  His consultant?  Tim Thomas. Potential side affects have been limited/encouraged to ‘hitting Canucks players within 5 feet’.

Stajan was told that he needed to pick things up and was shown what was expected of him. Then was shown this diagram: 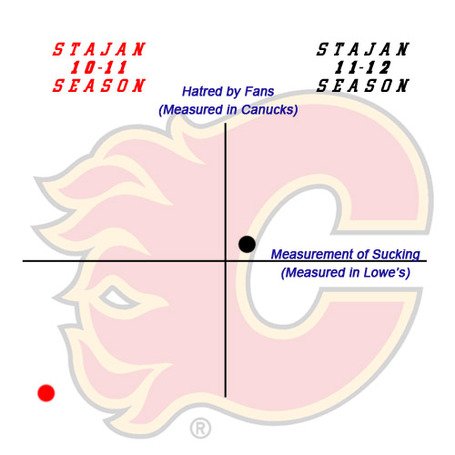