How did Miikka Kiprusoff do last year?

Share All sharing options for: How did Miikka Kiprusoff do last year?

(This was originally a three part series posted at my Tumblr blog.)

So there was some conversation based on this article a few days ago regarding the Flames and their true skill last year. The Flames were 9th in the league last year in raw Corsi, with a +235 rating-more then good enough to consider the team a playoff club. So where did the Flames go wrong? Well, you can start between the pipes with one number 34.

Based on his SV% breakdowns and the amount of shots he faced last year, can we determine how well Miikka Kiprusoff played relative to a replacement level goalie?

Looking at this chart, Kiprusoff played marginally better then an excellent AHL level goaltender last year. It’s generally accepted that a win in the NHL is equal to between 5 & 6 goals-Kiprusoff couldn’t even produce a single win with his Goal Value of +1. Basically, what we can take away from this is that based purely on SV%, Kiprusoff didn’t necessarily cost the team any wins when compared to a goalie of average skill and salary cap cost (<700k).

Next, we'll to look back to the 2005-2006 season to see if this past year was an aberration, or if it's part of a larger pattern. The 2005-2006 season made the most sense to me, as there was a stylistic shift in the game during the lockout and 6 years is a large enough sample size that we’ll be rid of most biases. 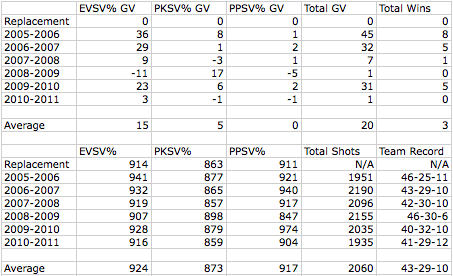 Kiprusoff’s Vezina year was far and away the best season he’s had, contributing 16 more points to the team over a replacement-level goalie. But as you look at the pattern since then, you can see it’s been less Kiprusoff lifting the team and more the team lifting Kiprusoff. In the past 4 seasons, he’s contributed 6 wins to the team, with 5 of those coming behind one of, if not the, best defensive groups in the NHL in 2009-2010. Other then that, it’s been a pattern of steady decline.

I’ve maintained that the best team Sutter ever built was the team in 2008-2009. That team had more then enough talent to make it to the 2nd round, and maybe even the Conference finals-but that was the worst season Kipper’s ever had, and it probably cost the team the division crown. Late-season injuries aside, Kiprusoff sunk the team much like he did last year. Hell, that team was probably the best Flames team since the Stanley Cup-winning year. To have such a promising season end because of unfortunate injuries to Mark Giordano and Rene Bourque and sub-par goaltending is crushing.

Lastly, let's compare his season to his financial equals. There are 10 goalies in the NHL who make more then 5 million dollars per year on the cap. (Well, technically 11, but Cristobal Huet is no longer in the NHL. lol!) 4 of those goalies make $6 million or more per year on the cap. For the purposes of this exercise, we will take every goaltender between $5,000,000 and $5,833,333 and see how they compare to one another, using their most recent cap hits and stats. 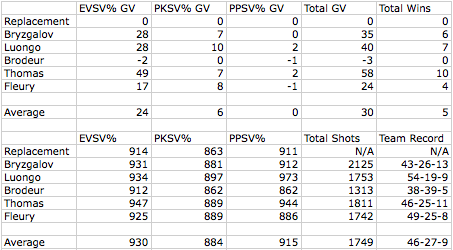 The obvious outliers here are Kiprusoff and Martin Brodeur. Both of their teams were top-10 in Corsi this past year, but both of the goaltenders failed to produce anything even close performance-wise to what they’re making in cash, and as we can see by the standings, their teams suffered for it.

So what’s the conclusion here? In my opinion, the Flames suffered from Kiprusoff’s goaltending to the point where it was the reason that the Flames didn’t make the playoffs. The team in 2010-2011 was better in almost every facet of the game over the team from 2009-2010, yet they finished with fewer points simply because the man they pay $5.83 million per year couldn’t stop the puck better then Devan Dubnyk did.

In terms of the upcoming season, I guess it's entirely possible he has a year similar to the one in 2009-2010, and if he does, the Flames will probably be a playoff team. If he doesn't, though, and continues on this path of decline...well, unless the team takes a massive step forward relative to last year, it's going to be a long-ass season.