Hayley has a breakdown of the Leblond trade here.

Peter Loubardias has been fired and will no longer be doing play by play for the Flames as mentioned here and on SBNation here. Derek Zona over at C&B did a previous article ranking broadcasters, if you haven't read it already you should, it is here.

Flames Nation speculates on the Flames acquiring Stamkos and dammit I am not going to apologize for plugging this article because I like reading about these situations, even if they are as likely as getting frost bite in July.

We already covered the Derek Smith signing, so lets see what else is there for Flames news? Former Flame Brett Sutter, Darryl's pride and joy pleaded guilty to assault, more here.

The Blue Jackets just took a hit already for next season, with Kristian Huselius giving himself a fairly serious injury.

Puck Daddy also has a Bruins photo-shop contest going down, check it out and savor the memory of the Canucks going down.

There is probably more going on but I would rather write about the Mentor Motif for the Flames after the jump.

The Mentor Motif, you know what this is; it is prevalent in literature and film.

It is the "old used up grumpy man" mentors "young naive kid" to greatness. The narrative usually goes something like this: Young and brash kid encounters old grumpy recluse who appears to be useless. In the story arc young kid questions and doubts old Grampa until about mid-narrative where old Grampa steps up and kicks ass. Young kid is impressed and now listens intently and learns from Grampa to fufil his protagonist destiny as a hero and save the day.

Don't know what I am talking about? Maybe this will help... 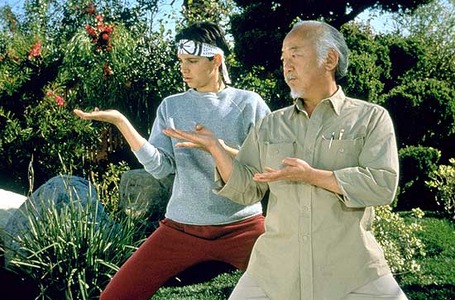 So what does this have to do with the Flames? Well the Flames have several examples of this next year. Situations where the Mentor Motif will hopefully be the reality. The playoffs may rest on it. Older players have to step up and kick ass and the ball, or puck as the case may be, has to be carried by the young apprentices.

Goaltending is starting to become a real concern on the Flames. After years of Miikka (workhorse) Kiprusoff lugging 70+ games, the Flames elite goalie is showing signs of slippage. With a SV % of only 0.906 and a GAA of 2.63 he no longer resides in even the top 20 starting goaltenders in the NHL.

With a Defence minus Robyn Regehr things are not going to get easier for Miikka, they will be getting harder. Time for Mr. Miyagi to step up and kick some ass.

Henrik Karlsson did not exactly storm onto NHL ice and his old school pad stacks in the shoot-out had many fans drawing a deep breath. As time went on Karlsson's play got significantly better. In his last 3 starts his numbers jumped. In the meaningless final game of the season against Vancouver he took 39 SA for a SV % of 0.923. His previous game on Mar 20, 2011 against the Ducks had 28 shots against and a 0.929%, his game before that on Mar 10, 2011 against the Coyotes had 31 shots and 0.935%.

Not shabby numbers for a rookie goaltender and it is the improvement he illustrated that was most notable. He still needs work in the shoot-out though.

Kiprusoff's workload has to be reduced and with it Karlsson has to be expected to continue to evolve. The last three games of the season showed what Karlsson can potentially do, if he continues on this track, the Flames Goaltending may surprise.

Kung-Fu Karlsson must step up to the challenge.

Daymond Langkow is a huge question mark for next season. On one hand his last full season showed significant decline but the year off looked like it did him a world of good, based on the few games he played at the end of last season. Rene Bourque certainly missed Lanks but young Mikael will learn the most from him.

Backlund got through his rookie season and he spent time on all 4 lines, so he made the rounds. I give Mikael a pass for a rookie year because he achieved the main thing that I think rookies need to do, prove they fit in and don't look out of place. Backlund made mistakes but he certainly did not look out of place on NHL ice. This is a win, the kid will have an NHL career, so now the waiting game begins if he can take his game to the next level.

Use the Force Mikael, play the two-way game, be smart on the ice, trust your feelings, well you get the point. Confidence is what young Mikael needs and Daymond may be that old player who will not only surprise himself but will do for Mikael what he did for Rene Bourque.

The Defense is a big question mark for the Flames. Butler will be expected to elevate his game and expectations of being that 4th D man have already been mentioned. It came out last season that Sarich was playing injured for most of the year, so we may expect a higher level game out of him next year.

I could find another Mentor Motif pic but I think everyone gets the point by now.

Old guy, everyone has written off, surprises you by kicking ass and impressing young niave kid. Young kid takes the lessons to heart and becomes an epic hero in the second part of the narrative, winning the Cup for the Flames.

The duos I highlight above are where we can hope for the surprises, the players who can tip the Flames from a non-playoff team to a playoff team.

Don't write those old Obi-Wans off quite yet, they may have a few tricks up their sleeves.