Wednesday's Hot Coals: Getting Into Trouble, 50 cent, Nerds and More!

Share All sharing options for: Wednesday's Hot Coals: Getting Into Trouble, 50 cent, Nerds and More!

This week on Wednesday's Hot Coals...

Yesterday, former Flame Brett Sutter pleaded guilty to disorderly conduct after doing his best Patrick Kane impersonation, and while the incident did happen while Sutter was a member of the Flames organization (he would be traded away 1 week later) the Flames somehow have a great overall track record when it comes to this kind of thing--which is surprising considering the city is party central and as shown by the move to deal Brett--they certainly aren't tolerant of it.

In this day and age athletes can't seem to stay out of the negative limelight, whether it be cheating (it's not cheatin' it's stampedin') a DUI and being on DWTS or violence--professional sports have just as much drama away from the game as you'll see during them. TSN in many ways has become like TMZ reporting on all the hot gossip of the stars we love (Adam Oates is shacking up with a ahem, "film star"?!), and there's not a week that goes by that there's not some kind of scandal making headlines. How is it that In a city of Drunken cowboys and scantily clad Bourque groupies that the Flames players have generally stayed out of trouble? It starts from the top, and as much grief as we give the executives of the franchise, they do a good job in assessing character and keeping the boys on the straight and narrow; I think it's a testament to the character of the organization and the players that this sort of "disorderly conduct" doesn't happen more often, especially during the Stampede where for two weeks straight it's socially acceptable to be a drunken idiot wearing cowboy hat getting into trouble--at least that's what the town drunks say (they say it with slurred speech to the tune of any Garth Brooks song). As hard as it was to watch these people perform as players for the Calgary Flames last season, It's easy being a fan of them because they don't embarrass us with their actions off the ice. Amidst the drunken den that is the stampede, I think the players of this organization should all be commended for their role in the community and ability to stay out of trouble especially during the greatest outdoor show on earth.

Luckily for you and the 3 other people reading this weeks steaming pile of... Hot Coals, I don't abide by the same set of rules as the Flames. So prepare to get into some sweet drunken Stampede trouble after the jump.

Speaking of trouble--I might be in trouble by posting this Hot coals, I wasn't sure if we're still doing them anymore, but if we're not this is ultra-rebellious and should read even more gangsta...it would be like I was say a Flames Fan who had been shot multiple times; I'm basically the guy your dad was like, "STAY THE HELL AWAY FROM THAT GUY--HE'S TROUBLE". I think it would be awesome if the Flames used a fitty track for the new Flames song of 2011-12, I know what you're thinking, "b-b-b-but but but rap doesn't go with hockey"--and that might just be, but you can't tell me it wouldn't be amazing to see drunk people dancing to In Da Club at the start of each game; just thinking of it brings a tear to my eye. 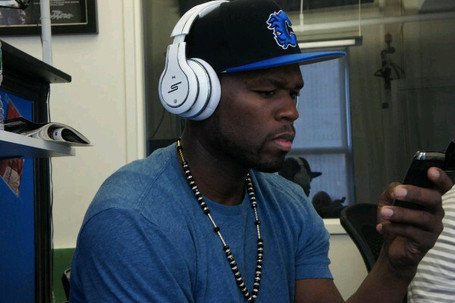 "Sven Baertschi is a P.I.M.P" - probably what is being texted

Yesterday a bunch of nerds hijacked M&G and started talking about stats and pocket protectors--it's an interesting read if you're into that stuff and are a nerd... but If you're like me though... and not a nerd (SHUTUP NERDS!) here's a bit of a step by step beginner's guide on how to read and deceipher this statistical nerd talk--while you read that, I'mma work on my abs.

(I should note the amazing, Derek Zona, actually shared these links with me a long time ago, but now like a cheezy infomercial they're yours for the the low low price of free.)

1.  Great for learning the basics, you've got to run before you walk, and in this case you have to learn how to read before you can learn nerd stats.

2. FAQ about Nerd stats from Gabe

These articles are even more helpful in deciphering Gabe's "beautiful mind"; Vic Ferrari's nerd haven, People talking about Vic's nerdinss, and how to use the nerd tools (like swords and stuff) of nerd stats.

10. The Contrarian Goaltender at Brodeur Is a Fraud:  http://brodeurisafraud.blogspot.com/

11. Further reading for you nerds

13.  Nerd test: If this is like you after reading all of this information...it's my deepest regrets to inform you...you are a nerd. Not like me and my boy 50, we have a corsi-swag of a million.

I've got a feeling the Flames are going to be deadly accurate with their shots as they practice their shooting by trying to hit popcorn. Maybe you nerds should invent a stat that tracks that.

If this is the last Wednesday's Hot Coals ever, I want to thank all 4 of you for reading my little pop-culture meets Flames news article--it's been real.

I'll still be writing here--it just won't be as stupid. :(