Share All sharing options for: Setting Fire to a Narrative: Roberto Luongo 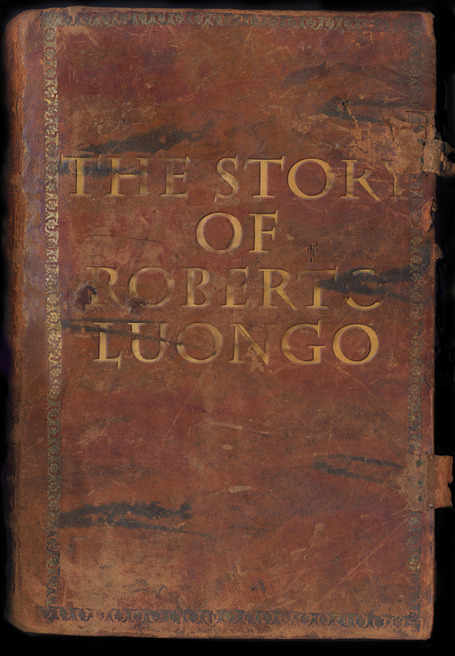 Awesome image courtesy of Colin Stuart, who will be providing more throughout the season.

You can find more of his stuff at his online portfolio.

A lot of hockey fans seem to forget that, which seems strange to me, until I remember my arch-nemesis "False Narrative" is always lurking around the corner. Just Google the the words "Roberto Luongo big game". Here's a small sample of results:

Roberto Luongo and the Worst Big-Game Goalies in NHL History ...
May 8, 2011 – Oh goalies. They have the hardest job on the ice at times it seems, and they are always the first ones we blame for a horrible loss.

Roberto Luongo's 'Big Game' History | Yardbarker.com
Feb 23, 2010 – Filed under: Ice Hockey, CanadaYou knew somebody was going to take the fall for Team Canada's loss to the United States, and it's going to ...

So where is this narrative coming from?

Narratives exist because we are brought up believing things happen in neat and tight plotlines. It's a lot easier for us to believe that Luongo is the villain from inside: foiling the plans of the Sedin brothers, forcing teammates to play harder, ruining the Vancouver Canucks salary cap. And if he had played well in game 7 of the Stanley Cup Final? Why- he's a redeemed man! A hero even!

Luongo has absolutely had games in which he's struggled. But he's also had a significantly higher number of games in which he's been flat out dominant. Look at the 2007 2OT elimination loss to Anaheim- Luongo was absolutely the only reason the Vancouver Canucks were in that game at that point, but it doesn't fit the narrative of choking, so we collectively forget it.

When you add in other narratives, such as Luongo "pumping the tires" of Tim Thomas and the heightened thrill of the Stanley Cup Finals, you're left with a mess of ingredients just waiting to be baked into a big fat sweet narrative.

Hockey is entertainment to 99% of us. The other 1% are the players and the reporters. The reporters have work when we are entertained. We are entertained when there is a narrative. We don't watch movies to see someone wake up, brush their teeth, go to work, make copies, go home, eat dinner, go to sleep. We watch movies to see a rising and falling plotline. How does Luongo match plotlines? Let's look: 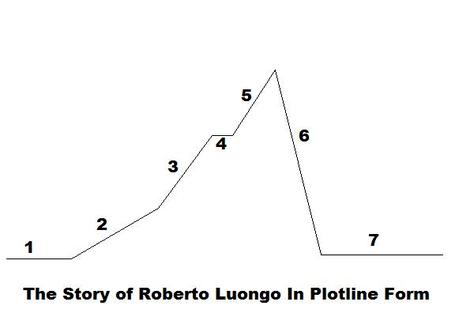 In fairness, there's a few different versions of what a plotline looks like, but this is a fairly basic version of the one I subscribed to as an art major, and most are pretty similar to this.

The parts, which I've numbered, are as follows:

The first series against Chicago. The concept that Chelsea Dagger is Luongo's kyrptonite. We see this player who had been heralded as one of the best goalies in the league, begin to fall.

We get more of the "Can't perform in big situations" stories as Luongo falters in the Olympics and loses to Chicago again, before finally beating Chicago in the 2011 playoffs, which was a microcosm of this on its own.

A lot of visual plotlines leave this part out: it's the quiet before the storm. In Vancouvers case, it's the Nashville series and San Jose series. Luongo performed well, and even exceptionally at times. However there were very few pieces written on him- it didn't fit the plotline. These weren't big moments for the Luongo story. Instead they led to the birth of "Ryan Kesler and the Sedins aren't showing up" stories.

The 2011 Stanley Cup Finals. All of a sudden, Luongo's back in the spotlight, thanks to plenty of goals given up to the Bruins in Boston. Of course, it's not that simple. Anyone who watched those games can tell you that Luongo was hung out to dry by some awful defense. A lot of writers spilled a lot of ink on how great Vancouver's D was this past season, but just because they have a lot of NHL capable players doesn't mean that they have a lot of really good players. When Ehrhoff is one of the two best guys you've got, alongside Kevin Bieksa, you're looking at a team with lots of second pairing players and no first pairing players.

Still, those goals against made Luongo look bad, and when contrasted with Tim Thomas's stellar performances (that while very very good, were also helped by having terrific defense in front of him) suddenly made for so much more drama than anyone could have gotten from any series yet. And the best part was, no matter how it ended, it would be perfect. Either the Bruins would win and Luongo would be a lamb led to the slaughter or the Canucks would win and Luongo's redemption would be complete.

This is Luongo skating off the ice. The Bruins celebrating and skating with the Cup. For all other stories, this is part of the climax. For Luongo's story, this is the falling action.

Here everything wraps up: Thomas wins the Vezina, Luongo watches. Other Florida goalies move on to better teams, and so on. Rumors of Cory Schneider being traded are unfounded, and the media moves elsewhere.

In a way, it's fascinating to watch it play out: to watch people ignore stats and believe only in the story that was written by a dying industry; to watch Luongo have to fend off endless questions about "demons" and "big games". The fact is though, he's a professional athlete at the highest level. You don't get to this point by just choking. The concept of "sample size" was almost developed for this occasion. Luongo's had maybe 10 huge games in his career, that's hardly a sample size worth noting.  But that's not the narrative. That's not the story we want to hear.

Still, it's fun to egg on Vancouver fans with 7uongo, LOLuongo, and Luon8o. And that might be worth all of this nonsense.