Questions for Feaster: Can you improve the draft record?

Share All sharing options for: Questions for Feaster: Can you improve the draft record?

Throughout the summer, I plan on posting a series of articles called the "Questions for Feaster". Basically, the idea behind the series is they are the same questions I'd be asking myself if I was the Flames GM.

The first question Jay Feaster has to address, other than "how the %&*$ did we not sign Erixon?", is whether or not he can improve on the franchise's dismal draft record.

Take a scroll through the team's draft history, and it becomes apparent that this was never a strong competency for the organization.

Looking at the Flames picks from 1993 to 2008 gives us a view of the selections that should be making up the current team. I chose 2008 since those players should all be 21 by now and capable of cracking an NHL lineup if they're going to be impact players in the league. A more conservative view would be to wait 5 years to judge a draft, but in my opinion 3 years is enough to know if we've at least got a top prospect or not. I then decided on 1993 just to give us a full 15 years worth of history, knowing that those players would be 35 or 36 and hitting the twilight of their career.

In those 15 years, the Flames drafted 150 players with only 45 of them playing more than 20 career NHL games (and maybe 3 more from the 2008 draft) and only 29 regular NHLers were selected. The worst part, however, is the lack of top end talent.

The Flames picked in the top 15 of the draft for 8 straight years from 1996 to 2003 and really the only impact player they came away with was Dion Phaneuf. Derek Morris (13th in '96) has played close to 1000 games as an NHL d-man, but he is more of a solid career player than a top-pairing guy.

In those 15 years, probably the best player the Flames selected was German Titov, who racked up 624 GP, 157 goals and 200 assists. And while solid, it's not exactly a career that inspires a jersey retirement.

Even the Phoenix Coyotes, who have whiffed on a ton of top picks, unearthed Danny Briere during that timeframe. Hell, the Maple Leafs scavenged Alexander Steen and Brad Boyes with the 24th pick in the 1st round a few years apart. They even managed to unearth Tomas Kaberle in the 8th round.

Outside of just looking at top-end players, the most recent regime of the Flames either haven't found guys who can make an immediate impact or just isn't giving them playing time. The only players the Flames drafted from 2005 to 2010 who have played more than 20 games in the NHL are Backlund and Keith Aulie. With Erixon now gone, the immediate cupboard is bare.

So don't act shocked and horrified when you see that Hockey's Future has the Flames organization ranked 30th in the NHL.

Owning 3 picks in the top two rounds of the 2011 draft could give the Flames a few options to fill Abbottsford with a little dazzle. Using those picks to move up is a possibility, which can greatly increase the odds of getting a high-end player, as Scott Reynolds and Derek Zona showed over at Copper 'n Blue.

Also, Iain Fyffe of Hockey Prospectus was able to show the GVT-value of each pick in the first round, which drops steeply from first overall to 10th, and then plateaus after that. 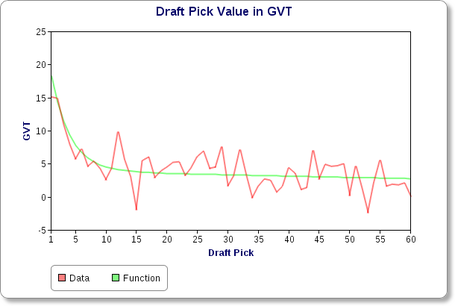 Using this logic, the two 2nd rounders hold similar average value to the 13th overall pick, but just have a lesser chance of developing into a "top player." I'd much rather see the 2nd round picks packaged to move into the top-15 if possible. Just using the odds from Reynold's table, moving the 2nds and acquiring a top-15 pick would increase the odds of getting a "top player" from ~70% to ~80%, which is a nice jump.

So.....Mr. Feaster.....what will YOU be doing to improve one of the worst draft records in the NHL?