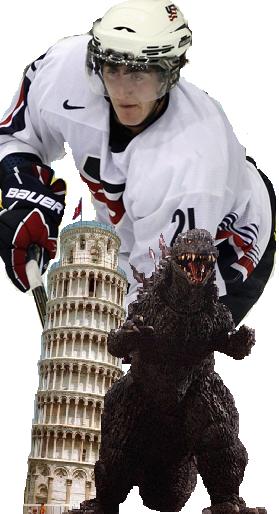 You can't write draft profiles and not talk about Jamieson Oleksiak: he's unavoidable. This young defenseman is a monster on the ice. His skills tower above those of everyone else.

No. He's gargantuan. If we all hadn't just gotten done watching Zdeno Chara in the Stanley Cup Finals, we'd be marveling even more at how massive Oleksiak is.

That being said, his size isn't his only tool. He has a strong physical game, which is something you'd hope for in both a defenseman and a very large defenseman at that. He's not terrible at puck possession and distribution, and he's defensibly responsible.

A lot of draft watchers are going to drool over what they think he could bring.

"He'll be the second coming of Zdeno Chara!" Never mind that the first coming is still here.

"He could push everyone around on the ice because he's so big!" Come on, there's more than just size/strength to that.

"He could help me hang my bay window curtains!" Yeah, probably.

Oleksiak projects to be a second pairing defenseman at best, barring some bizarre leap forward in hockey skills. For the most part, his skills end up at "not bad, but not really great either." He can play on the powerplay, hustles on the backcheck, and rarely loses his man, but you'll never mistake him for a defenseman leading the rush. His skating leaves, well, a lot to be desired, but that comes with the territory of his size.

Will the Flames likely target him? I sure hope not. While Erixon leaving was definitely a hit to our defenseman prospect corps, with Brodie and Leach still coming up there's a lot more depth there than I'd imagine there is on the offensive side, not to mention we have plenty of D who can't skate and a grand total of two who can.