Every week the SBN blogs have a little poll that runs on each one called Fan Confidence Poll. This incredibly scientific and accurate tool measures how confident fans of various teams are of their team. Noticing some strange patterns on various teams, I clipped each image of the last set of polls (the ones that vanished on June 9) and put them in various divisions to get a look at each fanbase's mindset. 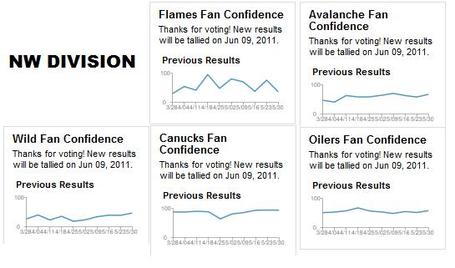 "Analysis" and the rest of the league after the jump!

Those are some sharp hills and valleys for us Flames fans. Like, absurdly sharp. Compare those to, say, the Minnesota Wild, who go up and down a bit, but overall stay pretty low. Lord only knows why the Avalanche suddenly jumped and look to be rising in their poll, but this is a fanbase who thought the team that made it to the 8th seed in 2009-10 purely on riding percentages was going deep in the playoffs.

I have to say I enjoy the dip in the Vancouver Canucks poll that I'm 90% sure coincides with Chicago taking them all the way to game seven. It'll be fun to look at next week's fan confidence poll for sure. 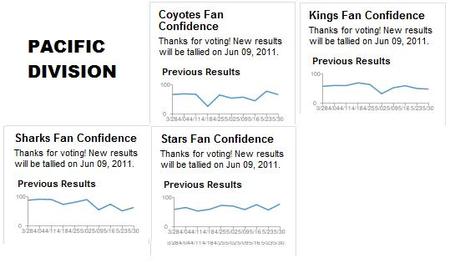 First I'd like to note that for whatever reason Anaheim Calling doesn't have a poll, so they don't show up

Anyways, it's pretty easy to note when various teams were eliminated from the playoffs- especially the Kings and Coyotes. The Sharks poll is a nice study in fans getting really depressed but trying to stay optimistic, and the Stars are pretty even keeled, despite Brad Richards leaving- though this poll might not address the period in which that news broke. 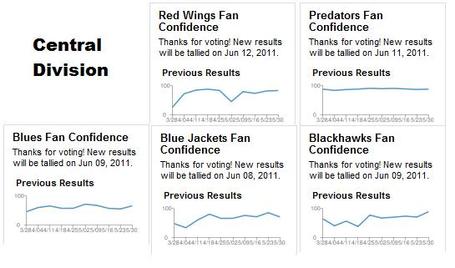 Either the Predator's poll is rigged or people in Nashville are the happiest in the world. The Blue Jackets rise coincides with the end of the regular season I think, which makes sense because you can't lose games in the offseason. The Blackhawks poll is just nutty. I have no idea what's happening there. The Red Wings is equally confusing, at least the beginning with the sharp rise; the dip in the middle is clearly their elimination. 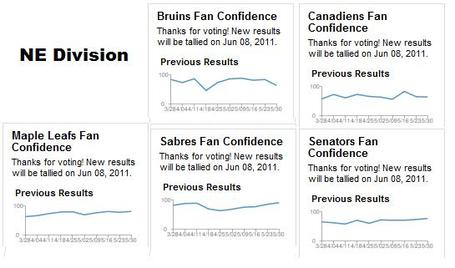 Most of these are pretty smooth and self explanatory. The Bruins have a nice dip that correlates with them nearly losing to the Flyers, but that's the only interesting bit here. There might be a spike in the Habs poll that goes Vancouver beating Boston for the first two games, but that's just conjecture. Hard to say what that might be. 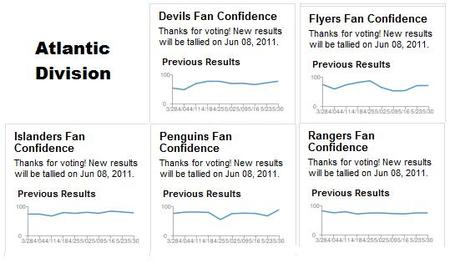 I like to imagine the Devils poll is exactly like the Blue Jackets poll: they're happy because you don't have to worry about scoring goals in the offseason. The Penguins have the usual elimination dip, and the fans of both the Isles and the Rags must be smoking whatever it is the Predators are smoking. Finally, there's something lovely about watching a fanbase go from nearly 100% confidence to right around 50%. Reality stings like a bitch, doesn't it? 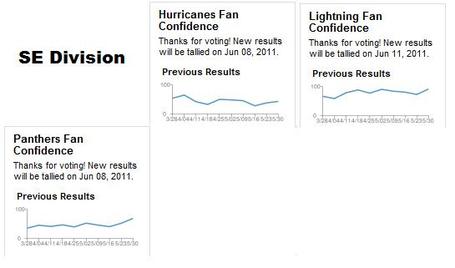 Neither Japer's Rink nor Birdwatcher's Anonymous had polls, though I'm betting the latter is because the team no longer exists. Behind the Net doesn't have one yet either.

I think the Hurricanes might be the closest in terms of nuttiness to the Flames. They're all over the place for no apparent reason that I can find. The Panthers fans are probably looking forward to another top draft pick they won't be able to sign, and the Lightning fans are still on a nice emotional high from a solid playoff run.

Looking at all of these though, one thing is clear. Flames fans are emotional, unstable, and insane. And we like it that way.