Stephen Harper, newly minted Prime Minister of Canada, has long been rumored to actually be Harvey the Hound, the mascot of the Calgary Flames and the NHL's first ever mascot. Harvey is a long-time passionate hockey fan, but in his alter-ego as Harper, he is a stoic semi-successful politician. Who would ever suspect that the crazy hockey fan in the Harvey the Hound mask was really Harper?

Mission accomplished Stephen, but now your secret is out.

Harper was born in Toronto on April 30th, 1959, where he spent the majority of his young life pretending to be a Toronto Maple Leafs fan. Upon moving to Alberta in 1980 he first lived in Edmonton and was working in the mail room of Imperial Oil. An experience that traumatized him from ever supporting the Edmonton Oilers and the young Harper moved to Calgary in 1982. In 1983 the next year, Harvey the Hound appears at the Calgary Flames' hockey games for the first time.

Coincidence? We think not here at M&G.

As Harvey the Hound, Stephen Harper spent years cheering the Flames faithful on in the Dome and had to secretly develop his other political identity as an unemotional politician so no one would suspect he was Harvey, the ultimate Flames fan. But surely the similarities are obvious, the blue eyes, the larger nose, the politician's tongue 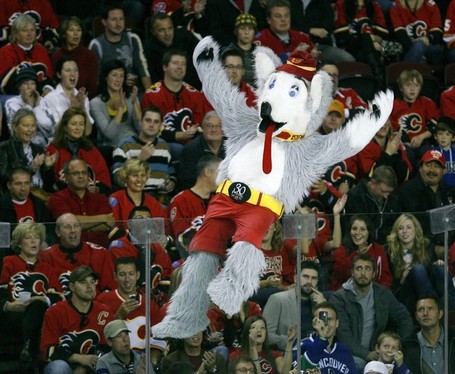 More on this breaking post-election story after the jump...

Harvey found success in his Stephen Harper identity and has held the Calgary SW riding since 2002. He first became Prime Minister in February 2006 but was always a hockey fan first. He has led the longest-running minority government in Canadian history up until yesterday, when he actually won a majority government in a historic election.

Why was the election historic? It was an earthquake-level shift in the traditional political landscape in Canada and at the core of it, as always in Canada, was hockey.

The Bloc Quebecois was decimated winning only 4 seats of the 75 ridings they ran in. Gilles Duceppe recognized that hockey is the priority in Canada, not politics. He quickly moved to have the national political leaders live T.V. debate schedule altered to suit the NHL Playoff schedule.

(You thought I was kidding on that didn't you?)

Duceppe's move was not enough, and the Bloc had the lowest number of seats by far in their history.

The Liberal party also bombed out with only 33 seats out of a possible 308, also the lowest in their political history dating back to 1867. This is like letting in over 15 goals in a hockey game, for those who don't understand Canadian politics but have a passing knowledge of hockey.

The writing was on the wall long before election day for the Liberals. For the love of God, what Canadian politician in their right mind would ever dare to show their face on a jumbotron in a close hockey game? Michael Ignatieff cleary had been out of Canada too long, put on a hockey mascot costume and cheer the game Mike, geez. Hockey first, Politics second--too bad you didn't know about Stephen Harper's other identity.

In contrast, the NDP absolutely got the hockey first, politics second mantra of the Canadian people. Smiling Jack Layton, a well known Habs fan--and a bit of a beer drinker--lead the NDP to a historic number of seats. 102 of a possible 308, over double what the party had ever achieved in its entire history.

The turning point of the election is pictured below where Jack declares his team, and with that takes 58 of 75 seats in Quebec. Jack is thrilled to be moving into Stornoway, Official Residence to her Majesty's Loyal Opposition, to watch the rest of the playoffs. It has a better T.V. than the Prime Minister's Residence on 24 Sussex Drive, butHarvey doesn't care, he spends most of his time in Calgary anyway. 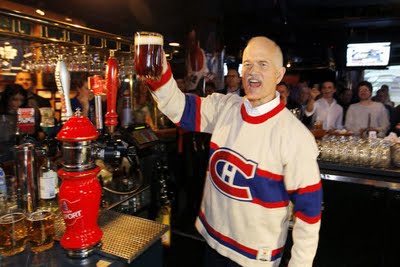 Poor Gilles Duceppe, if only he had grabbed a Habs jersey, he may have hung onto his seat in Quebec. How could Quebeckers not vote for a guy with a Habs jersey and beer in hand in the middle of the NHL playoffs? Viva le Habs...

Harvey, I mean Harper, will now face a tumultuous nation as M&G has outed him as Harvey the Hound. The face-off of the Habs vs. the Flames will be an ongoing Winter Classic 'till the next election. As hockey fans, I mean Canadian citizens, will now have two very clear choices about who to support in the next election.

It better not be during the playoffs again...

Harper has often been thought to be a fan of the Toronto Maple Leafs. Don't believe the misdirection. Harper is as deep a Flames fan as you will ever see, if the contrary is ever proven he will lose the next election in Calgary SW.

Here we have evidence of Harper clearly in competition against the Leafs on the battlefield. What real Leafs fan would ever play against their colors? 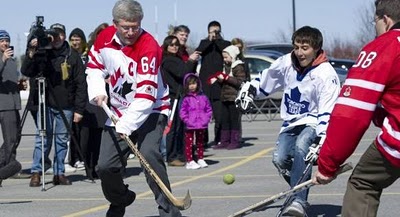 It turns out the first order of business and top secret priority of the Canadian Government is to get the Stanley Cup back in Canada. Canada's top newspaper is reporting that if an American team wins the Cup, they may actually melt it down for its silver content to help deal with their national debt.

Louis Vachon, head of the National Bank of Canada, comments on the possibility of the Stanley Cup being melted down for its Silver value.

(You thought I was kidding on that too-- didn't you?)

Congratulations, to Stephen Harper and Jack Layton on a historic Canadian election.