Share All sharing options for: Questions With A Flames Prospect: Patrick Holland 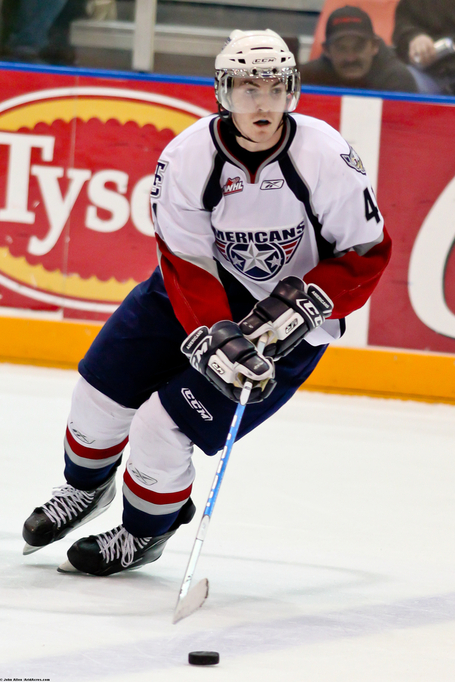 As a 7th round draft pick, Patrick Holland isn't exactly a household name for Flames fans, but it should be. In his sophomore year he's scored 62 points in 71 games, while largely playing a defense first role. He's been a huge part of the Tri-City Americans in the playoffs, and helped them to a 4-0 sweep of the Vancouver Giants in the first round.

Thanks to Dan Mulhausen, Tri-City's Director of Marketing, I was able to have a short telephone interview with Holland. Read on after the jump.

So you just swept the Vancouver Giants, how's that feeling?

At the last two games we had a writer there and she said that you were playing a huge role defensively. Is that where you see yourself long term as a player- a defensive specialist?

Not entirely, but I'll take whatever role is given to me. And no matter what role you have on the ice, you do have to play both ends. It's not a sport where you can just be an offensive guy. Either way I try to take care of my own end first and then when I get my chance in the offensive zone I just try to make the best of it.

Who's a player that is easy to compare yourself to, or who you try and model yourself after in the NHL?

So did you grow up as an Edmonton Oilers fan?

From time to time; I was never too big a fan for any team. Just being in Alberta it's kind of the Flames and Oilers and I couldn't really choose. I liked watching all the teams.

What would you describe as your biggest strengths as a player?

Probably just my vision and my intelligence on the ice. I feel like I give myself an edge there.

I noted last year you scored 36 [16-20-36] points in your rookie season and this year you had a significant step up in your point scoring totals [22-40-62]. What would you attribute that to?

Mostly just ice time I guess. Last year I basically only played the second half of the season because the first half I was kinda in and out of the lineup, and when I would get in I was on the 4th line so I didn't really have much of a role. I got my chance in the second half and I took advantage of it, so I saw a lot more ice time. And especially in the playoffs I had quite a bit last year; it was kinda tough to get me even more but I have been given more this year. And over the summer, with working out and an extra year of experience you're going to be a better player.

So going to the summer then, when the offseason rolls around, what do you think your goals are for training in the offseason? What are you going to try to work on the most?

There's not too many areas that are specific. Strength is kind of a general thing that you need to work on; you can't really single out one part of your body because there's too many workouts in the summer. You can't focus on one thing, you gotta work on everything. I guess getting my strength up is a little more important than it is for other guys.

What are some of your other offseason activities that you enjoy doing?

I really like playing tennis, which is good because it's pretty good with cardio, and it's another look at keeping active. Running can get pretty boring and pretty unimotivational. I like a lot of sports really, but tennis is easy to do, and there's a court right next to our gym, so tennis is a big thing we do in the summer.

As far as other off-ice activities, what do you and your teammates do on off-days?

We see a lot of movies, and hang out at each others houses, those are the big things.

What are your biggest pre-game rituals or superstitions that you do before every game?

I'm not really superstitious like a lot of players, so there's really nothing that would really bother me if I didn't do . I do have a routine a little bit because it's easy to stick to a routine. I usually eat around four o'clock, and after I eat I head to the rink, I guess I just tape my stick, kick a soccer ball around a little bit, do whatever until the team meeting. But yeah, there's no superstitions really for me.

So were you at the prospect camp last year for the Flames?

Yeah, I went to the development camp and the rookie camp, and the Penticton tournament as well.

So what was your experience with that?

It was really cool. I guess it was kinda new in a way, but being a hockey player, you have a lot of situations throughout hockey where you're going to a new place or meeting new players and new teammates or whatever, so that wasn't too new for me. But just the level of treatment is raised I guess; the way the team takes care of you and stuff. That was really cool. It was nice to get a little taste.

Penticton I thought was a great tournament. I was playing against guys like Taylor Hall and Jordan Eberle and stuff. It was really fun to live the life of a professional hockey player for a week or two. Just take the experience and go back to our WHL teams and start the season off with the same momentum we gained from that.

Going back to the Flames: being from Alberta, was it kind of a big deal back in your hometown when you were drafted by the Flames?

Yeah that was pretty cool. Lethbridge is only two hours from Calgary, so the Flames are probably the team of choice in that city. It'd be awesome if I got to play for them someday, and that'd be even a bigger honor, especially to come home and, not really be a star, but people would know who I am.

Do you keep in touch with the Flames much?

Quite a bit. I keep in touch with Ron Sutter, director of player development. I talk to him every week. It's playoffs now, so they let us do our own thing, but after the playoffs we'll probably talk quite a bit.