Game 81 Recap: Flames Win Battle Of Alberta But Lose War of the West

Share All sharing options for: Game 81 Recap: Flames Win Battle Of Alberta But Lose War of the West

With their season on the line, the Calgary Flames took to ice against the Edmonton Oilers. It was a must win situation for the Flames-- and they were playing like it. Taking their last stand, the team went out guns a blazing, winning by a score of 6-1. It however, wasn't enough as both the Chicago Blackhawks and Anaheim Ducks both won this evening; mathematically eliminating the Flames from the playoffs.

The Flames knew going into this matchup against the Oilers, that their future this season rested in the hands of fate. While they still had to win, they also needed a lot of other teams to lose; and unfortunatley for this group of comeback heroes, fate was not on their side.

With the Hawks squaring off against the Blues (and their backup goaltender) and at the time trailing, the Flames began their blitzed bombardment on the Edmonton net-- in the first period, Nikolai Khabibulin would see 20 shots come his way, and he turned away all of them and for that period, he was invincible and a heretic to the last of the Flames believers.

As the Flames settled into the second, the out of town scoreboard flashed the CHI-STL score; 3-3. That pending tie infused something powerful into the Flames; their full forced attack on the "Bulin Wall" finally had a breakthrough. Rene Bourque made a wrap-around move and the goal light shined never before. Two Jarome Iginla goals later, his 40th and 41st of the season assisted twice by Backlund (who'd have a 3 point night and add a glimmer that the future is bright in Cowtown) and the Flames were up three-zip, and yet the hometown crowd jovial as they might be, sat quiet staring at the grim final score of the Hawks and Blues game; the Hawks won, on an overtime goal from Jonathan Toews.

It wasn't over yet though; the Flames could still catch the pesky Ducks, who were playing the Western behemoth San Jose Sharks(who would coincedentily also start their backup tender).

If not for a poor turnover in the defensive end, leading to Magnus Paajarvi's wrist shot goal (his 15th of the year) Miikka Kiprusoff who once again played brilliantly (though relatively untested facing 23 shots) could have had his 7th shutout of the season.

The flurry of goals continued for the boys dressed in their vintage red, as Tanguay and Glencross would both score. Iginla would pot away his third of the night, completing the hat-trick but by this time the Ducks had all but flown away with the win as they lead the Sharks by a score equal to the Flames game (6-1) at the end of the second.

When the horn went, and the game ended there was a sense of  failure, the usual celebration and smiles were absent from fan and player alike, with the realization that the epic Cinderella run had ended. 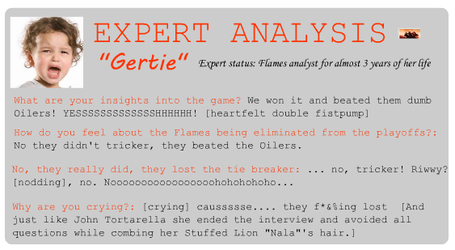