Share All sharing options for: Questions With a Flames Prospect: Max Reinhart 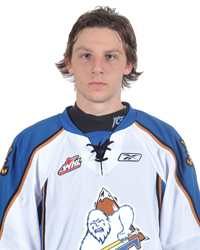 Image belongs to Kootenay Ice; credit is to Cranbrook Photo and Studio

Flames prospect and Kootenay Ice center Max Reinhart, son of original Calgary Flame Paul Reinhart, has become a favorite around these parts thanks to his strong two-way play and consistent scoring, no matter where he is. He and the Ice recently advanced to the second round of the WHL playoffs, largely due to a massive one goal, three assist performance by Reinhart in a 5-4 win over over the Moose Jaw warriors, in which all of Reinhart's assists contributed to a hat trick by linemate Matt Fraser.

Last week I got a chance to ask Max Reinhart some questions. We weren't able to make a phone interview happen due to the playoff schedule, however he was good enough to get back to me via email. Enjoy after the jump!

Matchsticks and Gasoline: What NHL player, current or former do you model your game after?  What part of their game to you try most to fit into yours?

Reinhart: I couldn't pick a player who I play the most like, so I got my coach to pick for me and he came up with Tomas Plekanec off Montreal. I think I'd try to fit his vision and offensive creativity into my game.

M&G: Your on-ice vision has definitely increased this past year, what else do you think you’ve improved upon since being drafted by the Calgary Flames?

R: I think the biggest improvements I've made this year on the ice has been my on-ice strength. The difference from last year to this year has made playing a lot easier for me.

M&G: Do you stay in touch with the Flames organization at all? How much?

R: I have weekly check ups with Ron Sutter the player development coach for the Flames. I just give him a quick update on how the week went. I also hear from them whenever they attend a game that I'm playing in.

M&G: In game two of your current series you had a great set-up while shorthanded to score the game winning goal--what enabled you and your fellow penalty killers to set up that play?

R: The puck was cleared down the ice and they threw the puck to our point man and I deflected the shot into the corner. I made a body check on the d-man and he threw the puck to Czerwonka, who drew 3 defenders to him and he slid the puck down low to them and I was all alone at the top of the crease and beat the goalie on the short side.

M&G: What do you consider to be your strengths as a player?

R: My strengths as a player are skating and puck handling. I also use my vision of the ice to create opportunities whenever I can.

M&G: What are your training goals for what will hopefully be a short offseason?

R: The main goals I have for off season training are to gain weight and get stronger throughout my lower body. I believe that getting a stronger lower body will give me a better chance at becoming a pro one day.

M&G: Are the Kootenay Ice doing anything fun for the playoffs? Beards, mullets, etc?

R: Our team has dyed our hair black and we are growing the traditional playoff beards. [Editor's note: I'd kill to get a photo of these beards.]

M&G: What do typical pre-game preparations look like for you: meals, music, superstitions, traditions?

R: Every game day I go to Quiznos with Drew Czerwonka and Matt Fraser. I order the bbq smokehouse chicken then I go home and nap until 4 where my billets make a pasta for me and my roommate Steele Boomer [Ed.: how great of a name is that?], then I take a shower and go to the rink.

M&G: What do you think you’d like to do as a career if you had never played hockey?

R: I would have tried to play golf. My family is really into golf and I really enjoy it.

M&G: What are some of your favorite day off activities?

R: On day offs most of the guys on our team play X-box, or when it is nice out we play some sort of sport. Just do anything to kill the time.

It was a bit short as this was less an interview and more a Q&A. Hopefully next season we'll be able to set up a phone interview at some point and check in with Max Reinhart. Still, it was nice to get some insight on the prospect.

Sticktap to Tiffany Harris, the Director of Marketing for the Kootenay Ice, for helping fascilitate this despite my awful timing. It's definitely appreciated.