The Calgary Flames did very little to keep their slim playoff hopes alive this evening, after falling to the pesky Anaheim Ducks by a score of 4-2. The six penalties the Flames took ended up being their downfall, but it will be a controversial "no-goal" call in the second period that will have the city and sports fans abuzz.

With the team on his back, Captain Jarome Iginla opened the game with a bang, scoring his team leading 37th goal of the season off of a beautiful snapshot from the right dot,  at the 2:58 mark of the 1st period. The Saddledome was electric, there wasn't a single fan in their seat and for a brief moment the upward battle that lay before this team looked possible.

Poor penalties would end up costing the Flames early, as Miikka Kiprusoff and the Flames PK went a horrendous 2-4 in the first period with a Bobby Ryan wrap-around and Corey Perry deflection. It was a lead that the Ducks would never (quite) relinquish.

Tim Jackman's dissallowed goal late in the second period had Toronto and officials unable to detect the puck crossing the line thanks to a then unseen Ryan Getzlaf, who managed to pull the puck out of the net. The play was reviewed for a considerable amount of time and given that the league, nor the officials managed to spot the glove of Getzlaf has raised some serious flags around the internet and Flames nation. It was a blown call, and it might have just crushed the Flames playoff aspirations.

Visnovsky would soon make the score 3-1, and by the end of the second, that no call looked to have deflated the home town team. Unable to throw in the towel, the Flames stormed back with a quick powerplay goal just 32 seconds into the third, as Mark Giordano fired a slapshot---assisted by Iginla, and Alex Tanguay past a screened Ray Emery.

The Ducks would add an empty net score, but the terrific play of Emery in net (he's unbeaten so far this season after returning from ayear long injury scare going to 6-0-0) coupled with the penalties and the poor call would spell a seemingly insurmountable deficit of 4-- the number of points the Flames need to pick up on 8th placed Chicago Blackhawks to make into the playoffs (they sit 3 points back but because of tie breaking procedures, they'll need to have the spot outright) and the news gets worse, they only have 4 games to do it. 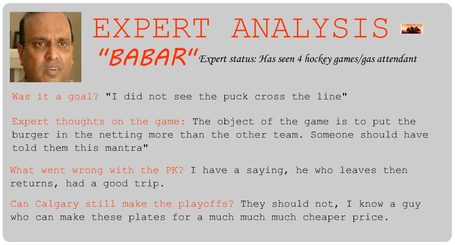 What did you think? Is this it for the Flames now? Are you tired of people saying it;s over, and are one of those people who waits until a team is mathematically out?