Rabbit Season: What To Do Now

Share All sharing options for: Rabbit Season: What To Do Now 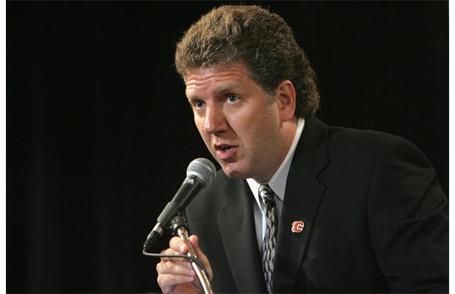 The Flames made it painfully clear that it wasn't Duck season last night- their playoff chances have hopped south while the Ducks remain just one position out. Although the Flames could still theoretically make the playoffs, the chances of that happening are at about 21.8%, according to Sports Club Stats. It wasn't just the loss last night either. Getting an OT point limited the damage to dropping about 4.6%. No, the fact that Nashville and Chicago both won, as well as the Ducks being our direct competition for a playoff spot is what really kills us.

In other words, it's not just the loss- it's everyone else winning.  So where does this leave the Flames?

Sure, if the Flames go on an absurd run (all sixteen points in the last 8 games) they'll definitely see the post-season. But expecting that is patently absurd. So assuming the Flames miss out (as they likely will), what happens in the off-season?

It's hard to say what the inscrutable owners and Ken King are thinking. They've made some questionable choices in the past (consistently supporting horrible Darryl Sutter moves, for one) but if they have any sense, the entire organization will see a makeover.

There's not a lot of real turnover in the Flames organization. Darryl Sutter is the obvious one, and a few scouts and other personnel were let go after missing the playoffs last year, but the core of the Flames front office has largely remained the same. Tod Button has been in charge of scouting since his brother's terrible reign at GM (in fact, the Buttons can largely be considered the reason Martin St. Louis and Marc Savard are not Flames). Various personnel in the hockey operations part of the front office have been around since the early to mid-90's, and so on.

What does this longevity among top personnel in the Flames organization say? Stagnation. When a body of water does not flow or move in some way, it stagnates. The same can be said for the Calgary Flames.

There is something to be said for loyalty- show this loyalty to people like goaltending coach and former backup Jamie McLennan, who can be credited with making sure Kipprusoff is at least a passable goaltender this year. Show this loyalty to Craig Conroy, who's the official Managing Assistant of Talking and Talking and Talking, or something. Show loyalty to the beer vendors and the cleaning crews. But to executives who might be feeling a little too comfortable? It's time to make them work for their jobs.

This offseason the ownership will have to make a decision regarding the General Manager position- currently occupied by Acting General Manager Jay Feaster. Hopefully the Flames will opt to go through a full hiring process and see multiple candidates. Hopefully they won't look at Jay Feaster just missing the playoffs (he took a 14th place team all the way to 9th!) as a positive thing and rubber stamp the A away from AGM. And most importantly, hopefully they'll hire an outsider with a good track record and let him rebuild the organization- not just the team.

The rebuild of an entire organization would not be easy or simple. It would be a long process. But it would also be a process that could benefit the Flames long term, and long term is how I want the Calgary Flames to succeed.