Game 74 Recap: It Was Like Watching a Mighty Ducks Movie 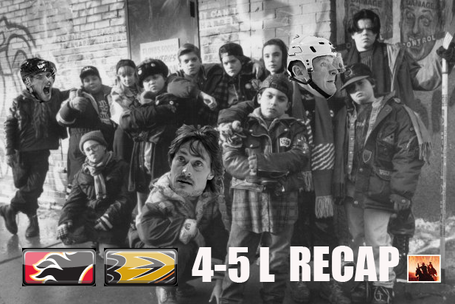 The playoff picture looked grim before the puck even dropped on Sunday, as the Nashville Predators picked up 2 key points against the Buffalo Sabres in a come from behind overtime win, pushing the Flames even further out of the playoff picture.

Needing a huge win at the Honda Center this evening, the Calgary Flames fell to the Anaheim ducks by a score of 5-4. For the third straight time between the two teams, overtime was needed. Unfortunately for the Flames, only a single point could be had in this desperate battle for a playoff spot-- but given the fact that the Flames trailed at one point by three goals in the 1st period, they were lucky to even salvage that.

The Ducks chased Miikka Kiprusoff early on in the first period, as in the blink of an eye (4:31) Ryan Getzlaf, Corey Perry and Francois Beauchemin lit the lamp to put the Flames in an early game deficit that at the time seemed insurmountable.

To their credit, despite the collapse, the away team rallied around backup Goaltender Henrik Karlsson, who after being told earlier this week that he would not be making another start this season, and likely wouldn't see any time down the very important stretch, played a very strong game between the pipes. The Tumba, Sweden native posted a .929 save percentage, in just under 57 minutes of play and looked more confident as the game drew on.

The Flames would fight their way back into the game, when Tom Kostopoulos put the team on the board with a late first period goal, his 7th of the season-- going into the intermission, this would be a huge momentum swing and jumpstart the prospective comeback.

All of a sudden with a goal from  Rene Bourque (25), and a second from Kostopoulus (8), the Flames were back in the game, heading into the 3rd period all tied up at three. Then, early in the third the unthinkable happened; Captain Jarome Iginla netted his 33rd of the year, a power-play tally past Dan Ellis, to give the Flames four unanswered and a moment of restored hope.

Then like every crappy Mighty Ducks movie ever made, the Ducks rallied.

Bourque's interference call was tragic for the Flames. It came at the tail end of a fantastic shift by the winger, who all night had battled with Beauchemin, on both sides of the ice but at the end of the day, it was a big turning point, in the Ducks reclaiming the flow of the game. On that very PP, the Finnish Flash, Teemu Selanne took a pass from Getzlaf, and potted away one of the biggest goals in the Anaheim Ducks season. With only 2 minutes and 1 second left in third, the unfortunate reality that the Flames had given up playoff points to the opposition began to set in.

The game would be won or lost in OT, and that urgency set the table for an exciting few minutes of play. Early on, with the game on his stick, the Flames captain was stone walled by Dan Ellis. Moments later, after switching to his "Snow White" mask, Karlsson would immediately face Bobby Ryan on a penalty shot, and make a fantastic save with his glovehand. Before the Flames could quiet their cheers after the save, when Ryan Getzlaf won an offensive draw passed it back to Toni Lydman who probably yelled out "oh it's knuckle puck time" while shooting a slapper towards the net, and Corey Perry redirected the game winner, 2:38 into overtime making the playoff picture for the Calgary Flames just that much more bleak.

The Flames played well for parts of the game, but their inability to remain a playoff-calibre team for a full 60 minutes continues to plague the squad. These were very important points to be won, and while they technically only lost one, it was a big point to lose.  The bright side of the situation is, Kipprusoff will go into tomorrow's game relatively fresh, having barely played this evening. In the grand scheme of things, this single point may come back to haunt the Flames, but if the Flames can walk away from this road trip, with 7 points, the playoff aspirations of this organization might not be that unrealistic--so this western road swing has not yet diminshed the teams hopes. The Flames will have to regroup fast-- with a game against the Los Angeles Kings, tomorrow, but if they can bottle their dominant play in the second period, this is a very winnable game, and as we've heard for a while now, a must win.

The overall game: "They had some good ones, but it wasn't all good"

Who is to blame for the early game collapse: "Staiosh" [Steve Staois]

Did Sutter yell at the team after the game: "no cause that would be wrong"

What do the Flames playoff chances look like: "A penginn" [Penguin]

What did you think about the game? What's your favourite Mighty Duck Movie, and quote? Have your say in the comment section.