Most Flames fans are feeling pretty down in the dumps about our prospects--both literal prospects and figurative ones. So using Behind the Net's league equivalencies, I did the math and put together a table showing how each prospect would be expected to produce in the NHL over a full season right now.

In the table below (I'll upload a Google Docs version at home so you can sort to your heart's content) I've listed eleven Flames forward prospects and three defensive prospects (T.J. Brodie, John Ramage, Tim Erixon). For the more part I left out the defensemen since their job isn't scoring, but with Brodie and Erixon in particular, I was curious how many points they'd put on the board over a full season, and John Ramage has a place in my heart.

The columns contain basic info like team and league, as well as the equivalencies. The first three NHLE entries are the straight numbers--not prorated at all. In other words, if the 48 games Ryan Howse is listed as playing were in the NHL, how many points he would score. The last column, "NHLE SEASON" is prorated for 82 games, a full NHL season. 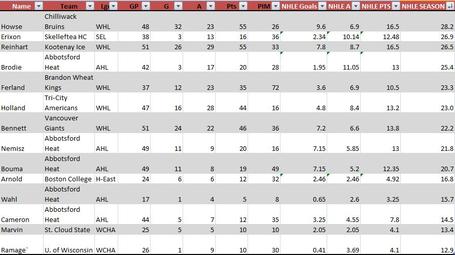 *Behind the Net offers two AHL equivalencies: 0.44 and 0.65. I used the latter for the players here, since the former is intended for AHL call-up type players rather than the developing prospects I have listed