I write about NHL injuries for The Score's Backhand Shelf, and whine about things on Twitter a lot (@JoNana).

Mark Giordano crouched to block a shot in the first period of a game against the Preds on November 29th. No big deal, right? Then he straightened up and felt a pull in the back of his left leg. Not just any pull. The kind of pull that screams "Hey, your season might have just ended, pal!" An MRI two days later showed that he had ruptured tendons in his hamstring.

Stop right there. What's a hamstring?

The hamstring isn't just an excuse for that jerk on your rec league team to bail on an important game. It's the name of the bundle of muscles that make up the back of the upper leg (and their tendons). Those three muscles - the semitendinosus, semimembranosus and biceps femoris - are responsible for bending the knee and extending the hip (the push-off motion when you're walking). They're obviously kind of a big deal. The tendons are what attach the muscles to the bones - the ischial tuberosity at the top (the bone in your butt that you sit on), and the tibia and fibula at the bottom (your lower leg bones). Give the back of your knee a grope. Feel those big tendons on either side? Those are your hamstring tendons.

The back of your leg. The three muscles on the left (and the tendons at either end) make up your hamstring.

How does a hamstring get hurt?

Hamstrings are a relatively high-tension structure, which predisposes them to injury - they're actually one of the most common leg injuries in athletes. Injuries generally occur during explosive (fast) movements, and are usually a stretch-and-tear type affair. You're far more prone to a hamstring injury if you've had one in the past, and weakness, poor stretching and fatigue are also frequently blamed.

The most common site of injury is at the proximal myotendinous junction of the biceps femoris (WHAT?) aka the spot at the top of the leg where the muscle and tendon meet.

There are three grades of hamstring injury:

The obvious signs of a hamstring injury are pain, muscle deformity (lumps or gaps) in more serious tears, and bruising. Awful, awful bruising. 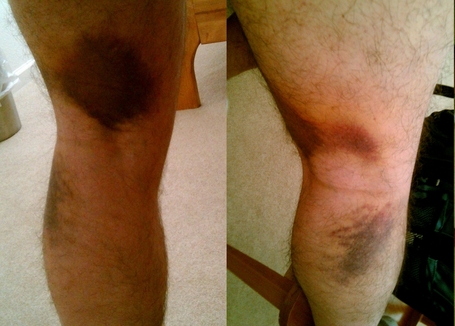 This is the same injury a few days apart. There's no need to explain how painful this is.

So what do you do about it?

The first step is to find out what's hurt, and the best way to do that is with an MRI. Giordano is set to have a second MRI in three weeks' time, the purpose of which is to get a more accurate idea of the damage once the swelling has gone down. You can actually predict the amount of time that's likely to be required for healing fairly accurately by measuring the extent of the damage to the hamstring.

Giordano is going to be spending his days icing his leg, resting it (sorry, no skating), keeping it elevated, and wrapping it. Pain and inflammation control is usually an NSAID (think Advil) plus Tylenol. Within the first few days of the injury he'll be at the mercy of the physical therapists with stretching and range-of-motion exercises (limited by what his pain will allow).

Rarely hamstring injuries will require surgery - usually only for complete tears or if there's so much bleeding within the injured muscle that the patient is at risk for compartment syndrome. Compartment syndrome is a fancy way of saying that the pressure inside your leg gets so high that it acts as a tourniquet, cutting off blood flow to the rest of the limb. You don't want that.

Seriously, how long are we talking here?

With a grade 2 hamstring injury, it's usually a three to four week recovery period. Obviously nothing is written in stone, and there's no way to really know how Giordano is going to heal. His progress with stretching and strengthening and that second MRI in a few weeks will be very telling. The fact that he walked out of the press conference at which he and Feaster discussed the injury with a minimal limp seems promising.

The trick to successful hamstring recovery is to not push training to a non-injury level until the leg is completely pain-free. With luck the Flames' athletic trainers and medical staff are of a conservative mind on this one - as much as the team needs Giordano back, hamstring injuries have a nasty tendency to reoccur, especially if they're not given the opportunity to recover completely.

Mark Giordano is getting a follow-up MRI for Christmas this year. Bottom line: The Flames may or may not be getting him back before the new year. We'll know a lot more in a few weeks.